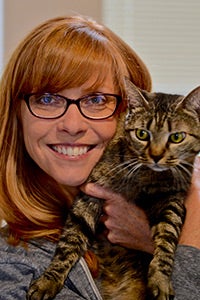 Holly Sizemore entered the animal welfare world in 1991 when she discovered a colony of community cats eating from a restaurant dumpster. The experience inspired her to help found the first trap-neuter-return organization in Utah. In 2000, Holly joined No More Homeless Pets in Utah and served the organization in a variety of roles, ending with the position of executive director from 2007 to 2010. In 2010, Holly joined Best Friends Animal Society and in her current role as chief mission officer, she oversees national programs, the animal care division at Best Friends Animal Sanctuary and the legislative department.

Holly has volunteered and worked in many different animal welfare arenas, ranging from small grassroots groups to large-scale public-private partnership efforts. Holly holds a bachelor of fine arts degree from the University of Utah and a master of public administration degree from the University of Washington. She and her husband proudly share their home with a few former community cats and one adopted dog.