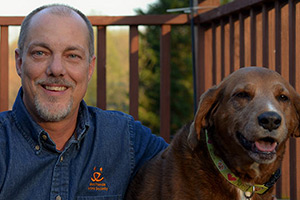 Scott Giacoppo is the Best Friends director of national shelter outreach, responsible for overseeing and growing the capability and capacities of strategic shelter partner organizations across the U.S. in order to speed up and sustain lifesaving efforts.

Scott has been involved in animal protection since 1989, when he became an animal caregiver in Minneapolis. He soon returned to his native home in Boston, Massachusetts, where he began his career with the Massachusetts Society for the Prevention of Cruelty to Animals (MSPCA). For the next 17 years, Scott worked for the MSPCA in a variety of positions, including his work with shelter operations, the humane law enforcement department, the media relations department and the advocacy team.

Prior to coming to Best Friends, he was the chief community animal welfare officer for the Washington Humane Society in Washington, D.C., overseeing the organization’s community-based programs, including animal control field services, humane law enforcement and the community cats program, which conducts free trap-neuter-return (TNR) services for community cats in the District of Columbia.

Scott lives in Maryland with a family of cats, dogs and a few tanks of fish.