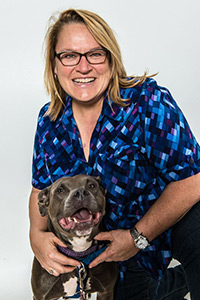 Tawny Hammond, the director of national no kill leadership advancement, was formerly chief of animal services for the city of Austin, Texas. Tawny has more than 30 years of experience in the public service arena, creating and implementing programs and services for people and their animals, working effectively with appointed and elected officials, creating and leading teams focused on professional excellence and best practices.

For six years, Austin Animal Services has been a leader for municipal shelters and animal control in the nation, saving more than 90 percent of the more than 17,000 animals who come through the doors each year. Austin is the largest no-kill community in the nation, as well as one of the safest communities for people and pets.

Tawny has a proven track record of success, serving for more than 25 years in municipal government in Fairfax County, Virginia, and bringing the Fairfax County Animal Shelter to no-kill in less than two years. Austin reached a new milestone under her leadership in 2017, achieving live outcomes for 98 percent of incoming animals.

For much of Tawny's career, she facilitated leadership programs for professionals and community organizations, as well as focusing on professional development and succession planning. Tawny is devoted to ending the killing of homeless pets in shelters, and believes that how we treat homeless pets is connected to social justice, community wellness and our compassion as a society.