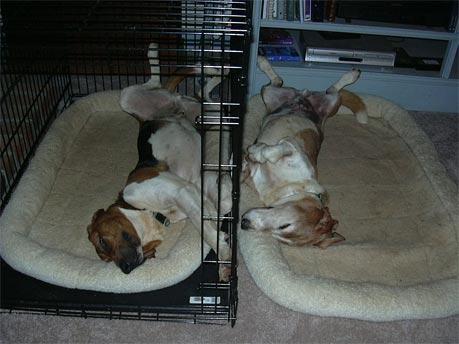 It was love at first sight. With Sarah Davidow's first step through the door at the No More Homeless Pets Atlanta (NMHPA) adoption fair – she locked eyes with Rufus and just knew he was her dog.

Rufus' life had been one of cruelty and abuse until he landed in the local animal control shelter. He was almost at the top of the list to go to the dreaded "back room" when a Best Friends NMHPA staffer found him. Her heart immediately went out to this big goofy boy, with long, lanky legs and a heroic bark.

These qualities made Sarah fall fast and hard; he caught her and she couldn't turn away from him.

Rufus has been with his new family for three months and is thriving amidst the love of his human and dog friends. In a letter sent to NMHPA, Sarah gushed over her furry companion:

"...he's just been a pure pleasure. He's gentle and sweet tempered. And he loves our woods. He's about to finish intermediate-level obedience training, and, for an independent-minded hound, he's done pretty well. He actually won the "come command" competition during his graduation from basic obedience class! We were so proud of him!"

Rufus is getting better at trusting his new family; he used to guard his food with fervor, but now will often let it sit for a while before eating. He still, however, turns into a barking fool during thunderstorms!

"We're really amused at how much alike he and our Bassett hound Gus are. Same coloring, same temperaments, same interests (tracking scents and lazing around), and very often the same postures at the same time. Ruf's been a great new friend for Gus.

"Thanks to you and everybody at Best Friends for helping him so much and bringing him into our lives, Sarah Davidow."