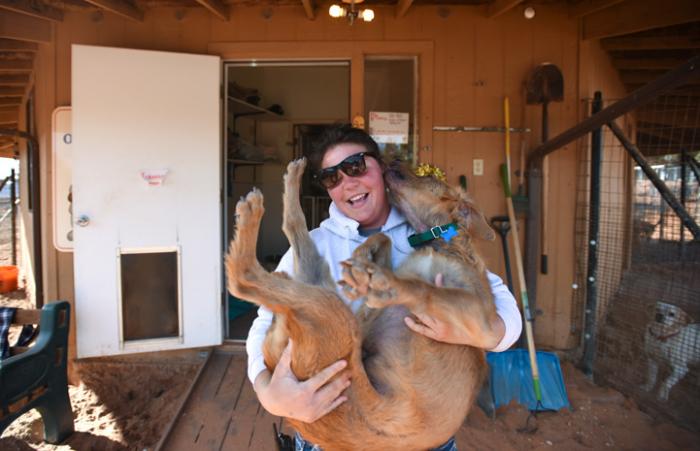 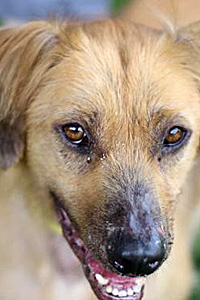 It’s a real bummer to feel uncomfortable all the time. But when a chronic illness also wreaks havoc on your physical appearance and people start looking past you, life gets even more difficult — especially when your life depends on getting people to notice you.

Carlos the Afghan hound mix knows this all too well. He had been living in a South Carolina shelter before he came to Best Friends. And every day he was hoping that someone would notice him and take him home. But no one would even give him a second glance. It had nothing to do with what Carlos was like on the inside. Anyone who spent time with him would immediately see that he’s a really sweet dog who loves people. But no one ever got that far because, on the outside, he showed all the signs of a sick dog.

Signs of a sick dog

First of all, Carlos has a mouthful of crooked, funny-shaped teeth. It’s likely he survived an illness like distemper when he was a puppy, so his teeth grew in that way. And it’s easy enough to overlook, because it gives him an endearingly goofy smile.

Everything else that was happening on the surface with Carlos, however, wasn’t so cute. He was almost completely hairless, and the fur he did have was rough, patchy and dull. His eyes were so weepy and irritated that they were almost completely closed. And he was so thin he was skin and bones. Worst of all, Carlos was miserably itchy, so he spent more time scratching than anything else.

In a shelter, Carlos certainly wasn’t going to find a home feeling and looking that way. So he came to the Sanctuary, where the Best Friends veterinary team went to work figuring out what was making Carlos so uncomfortable. As it turns out, food allergies were the culprit for all of his skin conditions. Though food allergies are no fun, this was actually good news for Carlos. It meant that with the right diet and medication regimen, he could start feeling and looking better again.

Of course, it took some time to get his diet and allergy treatments adjusted just right. But since August when he arrived in Dogtown, Carlos has made amazing progress. His eyes are wide, clear and bright. He is eating his fill and losing his skin-and-bones look. And his coat has grown back so well that his caregivers were able to figure out that Carlos may be  an Afghan hound mix — just one more thing that makes him unique. 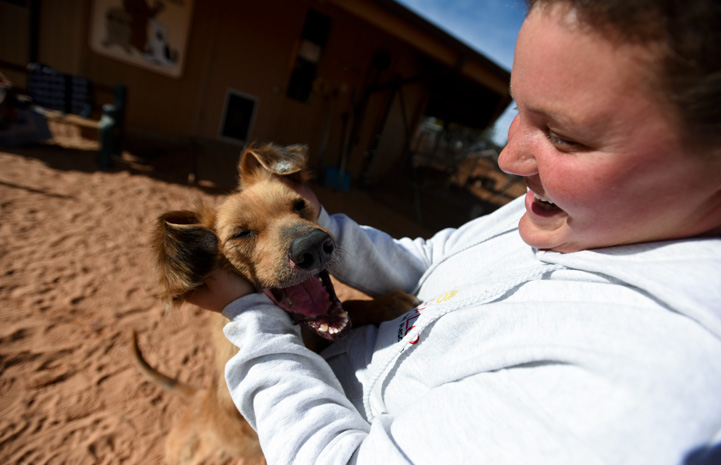 Best of all, Carlos is finally getting the attention he deserves. Besides getting lots of love from Dogtown caregivers, he has great fun meeting visitors and volunteers. With his new-found health and happiness, it turns out he really knows how to work a crowd. Now that Carlos can get up close to people without them being horrified by his appearance, he really hams it up for visitors and tours. He’ll rub against people’s legs like a cat, wiggle his head and talk a lot by making a funny, grumbly sound.

Although he’s still improving, it’s only taken Carlos a few months to go from a sick, scraggly looking dog to the handsome, outgoing fellow he is now. He’s so well-behaved that he can leave the Sanctuary with volunteers to go on outings in town. Finally, Carlos doesn’t have to worry about getting people to notice him anymore. Because when he’s clowning around, crawling into someone’s lap or just being his sweet, silly self, Carlos now gets his share of the spotlight. 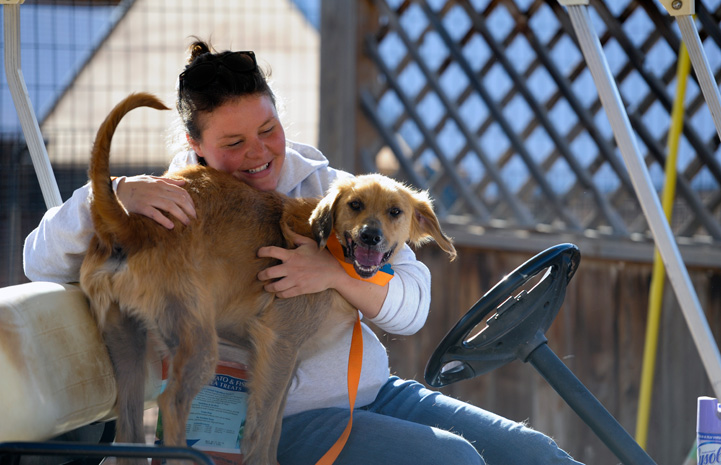 Help more dogs like Carlos look and feel their best. Here’s how: