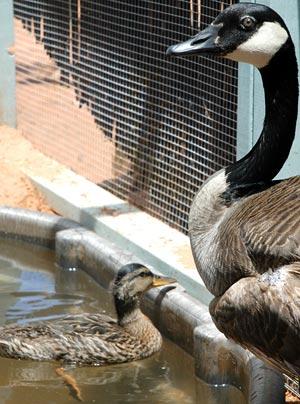 A baby duck or goose?

If Gracie the goose doesn’t look like that little tyke’s mom, don’t tell her that! This is her first foster experience, and she’s really getting into it. Nothing could convince her that isn’t her very own little ... duck? Goose? Wait a minute – what is that little gal anyway?

Truth be told, nobody knows yet!

The little feathery babe was found on her own in St. George, Utah, when the canals in a residential area were covered up for more development. Development and duckies don’t mix! All the other ducks and geese went away, looking for somewhere else to call home, but some folks found this little tyke all by herself – left behind, with nowhere left to swim.

She came to Best Friends. A couple of ducks at the sanctuary tried to foster her, but when they weren’t doing a good job, Gracie the goose won her turn. And boy, was she the right choice!

A permanent resident at Best Friends, Gracie came to the sanctuary years ago when some kids threw rocks at her and broke her wing. It still juts out oddly, so she can’t live in the wild. But she has a permit as an educational goose at Best Friends, and she seems happy. She’s always been a reserved and ladylike goose. But ever since the new little feathery friend arrived, she’s become a fierce protector. If anyone comes near her new baby, she hisses. She spends all day every day fussing over her. That’s her baby now, and nobody had better say differently!

But what will she think if her baby grows up to be a mallard?

Nobody knows her breed because she’s still so young. And there was no mom around to give a hint. So Feathered Friends staff are just watching and waiting to see what she is, when she’s reached all of her grown-up glory. And as for Gracie? Something tells us that no matter what, she’s going to insist her little baby is a goose! Even if she quacks just a bit...

Breaking News: The verdict just came in! She’s a mallard duck as you can now see from her most recent photo. And foster mom says that’s just fine with her!