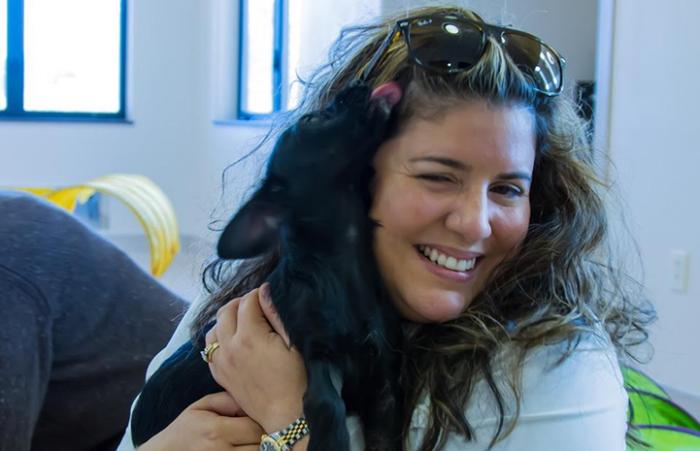 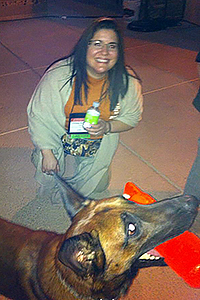 To attendees, the Best Friends National Conference is a seamless flow of fun, energy, inspiration and education. But one only needs to peek at Chrissy Rollyson’s scribbles on her notepad (if you can catch up to her) for an idea of how much work goes into creating that experience during the event itself.

Burying her nose in a notebook during a conference might not sound like it helps dogs and cats in shelters. But, as a longtime volunteer, Chrissy says the work is every bit as fun, exhilarating and fulfilling as hands-on work with animals. And, she adds, we all have our own, unique contributions — all of which matter.

It takes an army of volunteers

As the senior national events specialist for Best Friends, Cathie Myers leads the organization of the Best Friends National Conference from soup to nuts. That’s a huge undertaking when you consider the four-day event offers learning opportunities for both seasoned animal welfare workers and brand new volunteers. It also draws in those who work hands-on with animals and those who may prefer behind-the-scenes work, such as fundraising or marketing — all with the common theme of helping more communities become no-kill.

To bring it all together, Cathie relies on 12-15 on-site Best Friends staffers and about 100 volunteers.

“Volunteers do everything from monitoring session rooms, name badge assembly, helping attendees find their way, running the exhibit hall — on and on,” says Cathie. “We always have so many amazing team members, especially people, like Chrissy, who come back year after year.”

Chrissy was one of many volunteers helping to make the conference a success. But after her first year when she helped out in a traditional role, she really wanted to do more.

“I remember telling someone I wish I had more to do,” she says. “I don’t like to be inactive. If I can help, I want to help.”

Someone handed her a notebook and asked her to follow Cathie. And so, Chrissy spent the rest of the time jotting down notes of every situation and every concern that required Cathie’s attention.

She says, “Anytime someone came up to Cathie with an issue at the conference — a microphone is missing, a headset isn’t working, it’s too hot in this room, the water needs refilling — it all went on my list, and Cathie answered each one-by-one, all while her cell phone was ringing.” 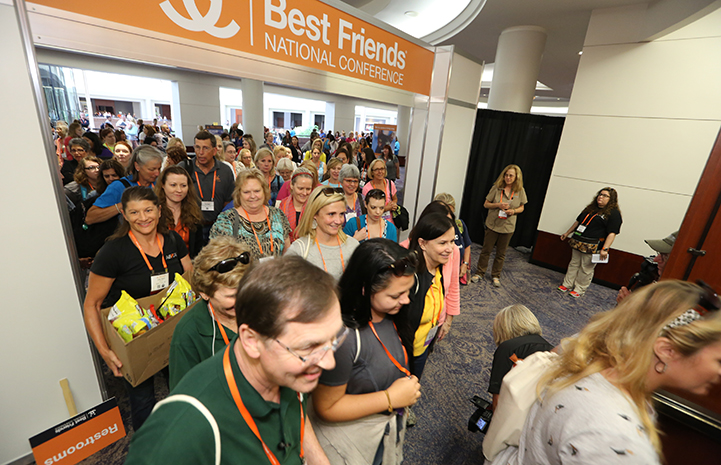 Fast on her feet

If that doesn’t sound like a challenging job, then you haven’t met Cathie at any of the past conferences. You have to get plenty of sleep and eat your Wheaties at breakfast to keep up with her.

Chrissy says that one time the two of them were opening some large double doors to a conference room.

“I looked down just for a second to make sure no toes were in the way,” she says. “I looked right back up, and just like that she was gone.”

That may not sound like a big deal. But as Cathie points out, just walking down a hallway can yield a to-do list a mile long.

“All day long during the conference, I get stopped every few feet with something else that needs attention” Cathie says. “I can run off to do one of them, but then I can’t remember the other nine things before several more things are brought to my attention.”

Chrissy has become an invaluable right-hand woman, catching all of those details about things that need to be done. The result is the flawless conference that attendees have come to know and love. 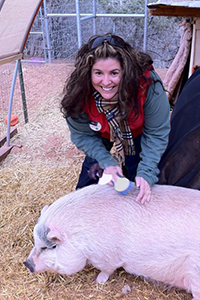 Beyond the conference, Chrissy has learned that there so many hands-on ways to help animals that people might not think of right away.

“It wasn’t until I started getting involved with Best Friends that I finally found my purpose,” Chrissy says. That purpose often includes doing all sorts of jobs in addition to working directly with the animals, as she experienced when she volunteered at the Sanctuary. “I’ll wash dishes all day long so a caregiver can spend more time giving love and attention to the animals,” she says.

Chrissy credits her sister, Cathy Overfield (who works as an adoptions specialist for Best Friends–Utah), for introducing her to Best Friends. Her sister had a calling to help dogs and cats, and Chrissy simply wanted to visit her. But when she realized how many ways there are to make a difference — with or without actually working with animals — it’s as though a spark went off.

“I’ve never had something I wanted to throw myself into before, much less for free,” she says. “I found it later in life, but it feels great to truly feel like I’m helping.”

Join us at the conference!

Learn more and register to attend the conference

Photos courtesy of Chrissy Rollyson and by Chris Savas