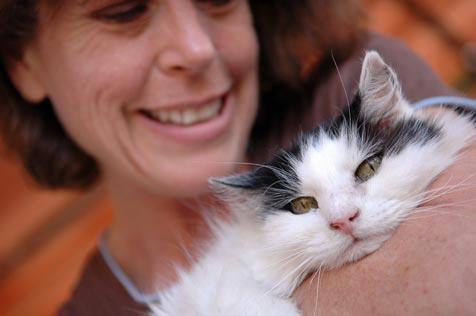 Feisty is all cat...With that in mind, it’s hard to walk by Feisty’s play area when he’s in a good mood and not suspect something is amiss. You see, when he purrs, he sounds exactly like a pigeon. Or a dove. Or a really effective bird caller.

Um, Feisty? Whatcha doin? Trying to lure some of the wildlife over for an up-close and personal...chat?

Really, folks, in a place where hundreds of special cats live, this little vocal trick of Feisty’s is unique in every way. A cat who coos. You only have to rev up the engine and he keeps going and going all on his own.

Feisty came to Best Friends as a trapped feral cat in 1996. He used to be a bit of a loaded pistol, lunging and scratching at whomever he didn’t like. Over the years, though, he’s settled down quite a lot and now enjoys displaying his vocal talents for pets and scratches. Only don’t try to approach him with a grooming brush. Rumor has it, that’s when he trades in the bird calls for an alligator growl!