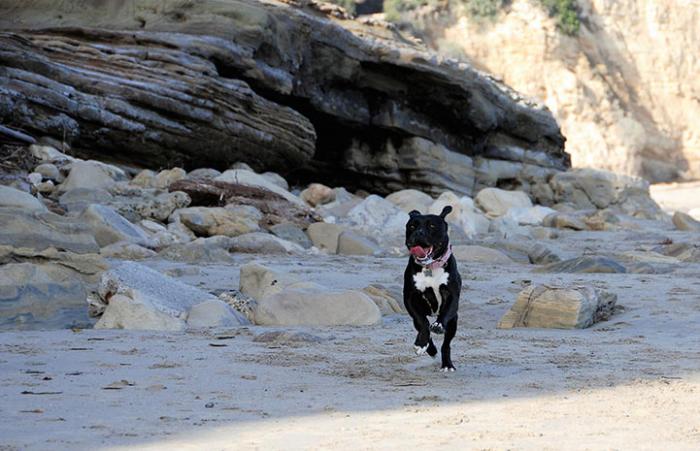 Dog once too scared to walk now runs on the beach

No-Kill Los Angeles (NKLA) is an initiative led by Best Friends that brings together passionate individuals, city shelters and a coalition of animal welfare organizations to end the killing of dogs and cats in Los Angeles shelters by the year 2017.

Our NKLA Coalition partners are saving lives every day. We never get tired of hearing stories about the dogs and cats saved, and we think you’ll love them, too. Here’s an extra special one from Karma Rescue in Santa Monica, California.

No one can say what had happened in her past that caused Roxy to be so fearful, but the result was clear. When she first landed in a busy shelter she was so terrified she wouldn't walk.

As The Dodo reported, Roxy, who'd come in as a stray, would flatten herself on the ground. Shelter staff had to carry her outside. 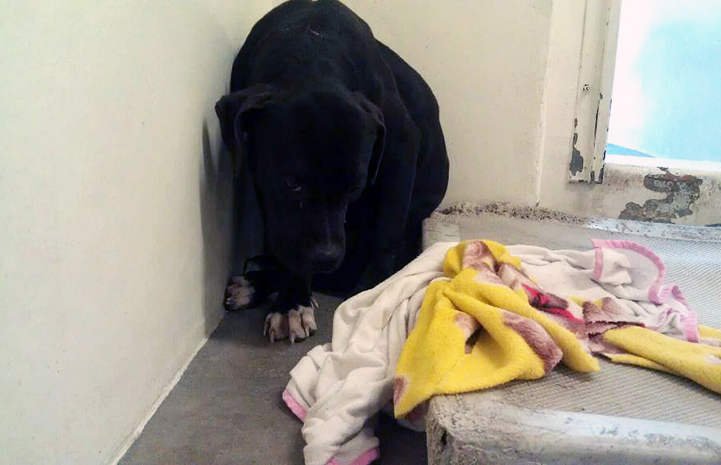 We'll give you the happy ending up front because a lot has changed since those first days when Roxy landed in a shelter: Thanks to Karma Rescue saving her, and adopters who gave her a chance, now Roxy doesn’t just walk. She flies.

Now her days include frolics on the beach, along with her favorite people and best dog friend, a bossy Pomeranian. Today at home, she is a champion snuggler with the household's cats.

Here’s how she went from afraid of the world to loving life.

After a month or so in the shelter with no family claiming her and no adopter to take her home, Roxy was taken in by Karma Rescue, an NKLA Coalition member. Arrangements were made for Roxy to stay at a local veterinarian's office, where she remained fearful, except when the resident cat appeared. Then, her whole demeanor changed. She looked a tiny bit happier and, in fact, she was happier. It turned out, she likes cats.

That's how Roxy earned a note in her adoption bio about how much she enjoys cats' company ― which is good, because that's exactly what Sharra Platt and her husband Glenn were looking for.

With three cats and Kasey, the little Pomeranian, already at their Malibu home, Sharra and Glenn had decided it was time to adopt another dog. But it would have to be just the right one who would get along with their resident pets. They were interested in adopting a pit bull terrier, since a disproportionate number of pit bulls (or dogs who look like them) end up dying in shelters. They were looking for an underdog, and Roxy was exactly that.

Sharra spotted Roxy's adoption listing and reached out to Karma Rescue. She learned about Roxy's fear issues but wasn't deterred in the least. A long time before, Sharra had adopted a cat who'd been very scared of people.

"I watched him turn into the most affectionate cat I ever had," she says. "It made me think we could help Roxy, too."

When the couple met Roxy for the first time, she climbed into Glenn's lap. "Then," says Sharra, "she crawled into mine." So they decided to try slow and careful introductions to their pets.

Kasey tried to play. Roxy was too shy for that. "But she was super sweet with him," says Sharra.

The cats were introduced one at a time. It all went perfectly and with that, Roxy got adopted.

When she came into the house for the first time as an official member of the family, one of the felines ― a bold, friendly cat named Kitty ― strutted right up and gave Roxy a bump with her nose.

Then the whole family crawled into bed for some welcome home snuggle time, and Kitty was right there for more.

“She jumped on the bed and started head butting Roxy over and over again,” Sharra says. “I swear it was as if she was welcoming her to the pack and trying to reassure her that it was going to be OK. Those head butts and sweet moments just an hour after she arrived completely sealed the deal."

In becoming part of this family, Roxy learned to trust and not to fear the world quite so much. Sharra attributes much of this progress to Kasey, who is so confident that he seemed to teach Roxy how to simply be. "Roxy would see him greet people and it made her more open to it," says Sharra.

Over time, Roxy slowly grew comfortable in her new life, even outside of the safety of her house. She had once been frightened by street noise from such things as trucks and garbage cans. Now, she still doesn't love trucks, but doesn't seem so scared.

Roxy enjoys living in Malibu, greeting her many dog friends and even some familiar people from the neighborhood. But her favorite adventure is going with Kasey on trips to the beach.

Wherever they are, Roxy and Kasey are inseparable, with Roxy following her brother around. Just mentioning Kasey’s name gets her tail wagging, though she still has eyes for the cats, too.

"Roxy would be buddies with a mouse if we brought one into the house,” Sharra says. “She loves all animals." The family’s other pets helped Roxy just as much as the two loving humans in the household.

Says Karma Rescue founder Rande Levine: "The power of healing lives is in all hands and paws. When they join together, a solid bond forms made of truth, compassion, love and trust."

Helping other dogs get a second chance

It took a long time for Roxy to truly let go of her past, and for a few years after her adoption, she had nightmares. "We would gently wake her and tell her she was home and safe," Sharra says.

Those nightmares subsided over time, and a year or so ago, Sharra noticed Roxy's tail wagging in her sleep. It seemed like the clearest sign that, even in her deepest subconscious mind, Roxy had learned that she is now safe at home with her family, with the bossy Pomeranian, her “lickable” cats and two people determined to give her a wonderful life.

"There is something about watching a dog transform before your eyes and then having such appreciation that just bonds you to that dog," says Sharra. "Her tail wags constantly. She wakes up wagging."

Roxy also inspired Sharra to help other dogs by volunteering with Karma Rescue to help out with adoption events, walk dogs, and do meet and greets with other potential adopters.

She wants other shelter pets to get the same chance as Roxy: to have a loving family to make sure that despite what happened in the past, from now on they will know they are safe and loved.

More about NKLA and all our partners