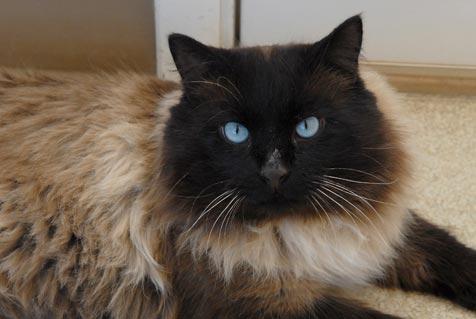 If Bigfoot ever had a pet cat, he might have ended up at Best Friends. For a week or so, there have been sightings of a large, fluffy, mysterious Siamese cat all around the sanctuary. An elusive wanderer, to be sure. He left impressive tracks wherever he went, but the cat somehow always managed to stay one step ahead of the staffers trying to catch him.

He wasn't exactly sticking to one location, either. He'd been all around the cat areas; he went up to the Bunny House to say hello; and he stopped in at a few other places for good measure. Everybody kept spotting him, but nobody could get close. Then, the weather at the sanctuary took a turn for the worse. The snow started falling again and ol' Bigpaws decided he'd had enough. He allowed the humans to trap him once and for all. And here he is, folks. Isn't he a beauty?

His new name is Daniel, though his nickname, of course, is Bigpaws. Whatever you call him, you have to admit he's one impressive guy. And it's not just the brilliant sapphire eyes; he's way more than good looks. Daniel knows how to live large. On his first day as an official Best Friends cat, he downed more than four bowls of food. (It takes a lot of fuel to run and hide and outwit a whole team of humans for more than a week.) No doubt he's already planning his next grand adventure.

Look out, everybody! Bigpaws is ready to make his mark on the world. And no doubt, it'll be a big one.