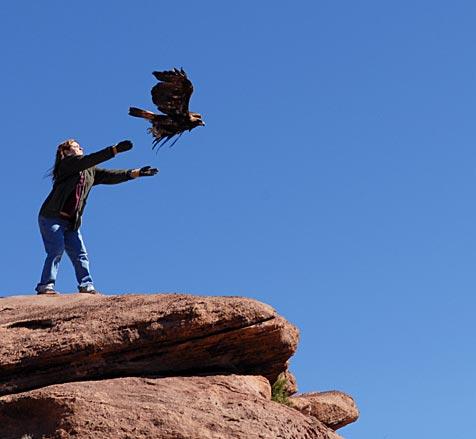 A golden eagle who arrived at Best Friends’ wildlife rehabilitation center last month is now flying the skies above the sanctuary, healthy once more after nearly gorging to death on carrion.

The release occurred much earlier than expected. Best Friends’ licensed wildlife rehabilitator Carmen Smith originally thought the eagle would need to spend at least two months at Wild Friends, the wildlife rehabilitation center at Best Friends Animal Sanctuary. But the progress she made after having surgery was so rapid that Smith could see no reason to hold her any longer.

A conservation officer had picked up the eagle just outside Zion National Park and brought her to Best Friends. She had been feeding on a bird carcass – overfeeding, that is, which was apparent by the goiter-like protrusion extending from her crop, the pouch that receives food after it passes through the esophagus.

The weight of the food forced the crop to fold at its exit, trapping the food in the sealed-off area. With nowhere to go, the meat rotted, causing an infection that grounded the bird. Smith believes the bird had probably been starving when she came across the carrion, and couldn’t stop eating once she came across the meal.

Best Friends veterinarian Dr. Debra Nicholson performed the surgery on the eagle, opening up the crop and removing about a pound of undigested meat. She also had to cut away the stretched tissue in the crop before suturing the crop back up.

Because the eagle had been in rehab for only a few weeks, Smith didn’t have to move the eagle to the Wild Friends flight aviary, where most raptors go for physical conditioning before they’re released back into the wild.

"Hard release" of a wild bird

The release was what’s known in wildlife-rehab-speak as a "hard release," in that the bird was transported to a suitable release site and let go (as compared to a "soft release," when the animal’s enclosure is opened up and the animal is allowed to flee).

Barbara Weider, sub-permittee wildlife rehabilitator at Best Friends, did the honors, carrying the bird from the crate to the rim of Angel Canyon, and tossing the eagle into the air. After a few vigorous wing flaps, the eagle glided straight for the other side of the canyon – with a few cantankerous ravens on her tail – and disappeared behind the rock formations.

Later in the day, and a few days after that, the eagle was spotted riding the mid-day thermals, circling the skies and behaving as an eagle should.