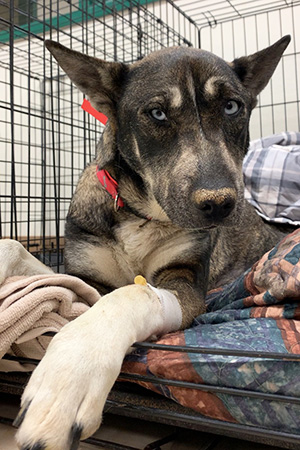 When a Navajo Nation resident brought her dog, DeeOhGee, to be spayed at a weekend clinic held in Kayenta, Arizona, in early July, she didn’t know she was saving her dog’s life.

“DeeOhGee had been a great momma to several litters, but when her family had the chance to get her fixed, they jumped at it,” says Alex Allison, project manager and founder of The Parker Project, which in conjunction with Best Friends put on the recent event in Kayenta, Arizona.

As it turned out, the sweet dog was gravely ill with a uterine infection called pyometra. When her person came to pick her up and learned how close she’d been to losing DeeOhGee, Alex says, “She burst into tears.”

Pets on the Navajo Nation

The number of animals living on the Navajo Nation is significant, according to animal control manager Kevin Gleason, who estimates that there are about 250,000 dogs either living in homes or roaming free among the communities. (That figure doesn’t include cats, horses and livestock.)

Although homeowners are only allowed to have four animals (two if they live in a Navajo Housing Authority rental), many share their homes with more. And many of them are in the same predicament as DeeOhGee’s family: They don’t often have an easy way to access the kind of health care they want for their animals, and their pets keep having litters due to lack of spay/neuter resources in the area. 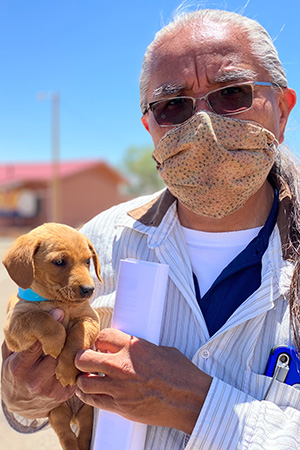 “The Navajo Nation spans 27,000 square miles across Utah, Arizona and New Mexico, with only a handful of full-service veterinary clinics,” says Michelle Weaver, director of sanctuary outreach and animal engagement at Best Friends. “There are many people who live on the reservation who don't have a car or the money for gas to drive a couple of hours to the few resources available.”

[After a mom dog’s eight puppies were safe and adopted, it was her time to shine]

“With so few vets, it gets overwhelming for them, too,” says Keith Slim-Tolagai, Navajo Nation program specialist for Best Friends. “People obviously have to make an appointment for spay/neuter and vaccinations, but if their dog has an emergency it needs to be seen right away. Unfortunately, the appointments are already stacked up and the clinic won’t have an opening until maybe next month. And if you go outside the reservation to the border towns for care, it gets expensive.”

Having grown up in Piñon, Arizona, where he lives today, Keith is intimately familiar with the community and its needs. By being there every day and traveling throughout the area regularly, he is establishing and maintaining a relationship with people in these communities, and that informs how Best Friends can help.

At the July event, 122 animals were spayed or neutered and hundreds of vaccines were administered. In addition to assisting with clinics, Best Friends grants funds to groups like the Parker Project so they can do more. This year, those funds are helping support at least six spay/neuter events for pets on the Navajo Nation. The Parker Project is also working with other agencies to provide clinics nearly every weekend of 2021. 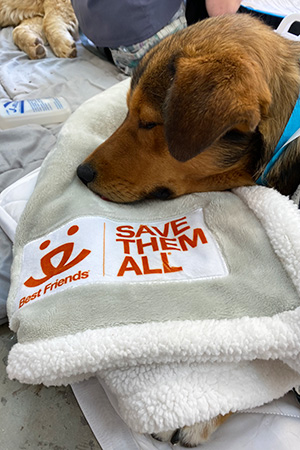 “We are excited to provide funding for these events with the Parker Project because this group is doing amazing work with compassion for both the animals and the people,” Michelle says. “Providing these services not only helps animals stay healthier, but it also reduces the number of free-roaming animals who need help or who may end up in a shelter.” 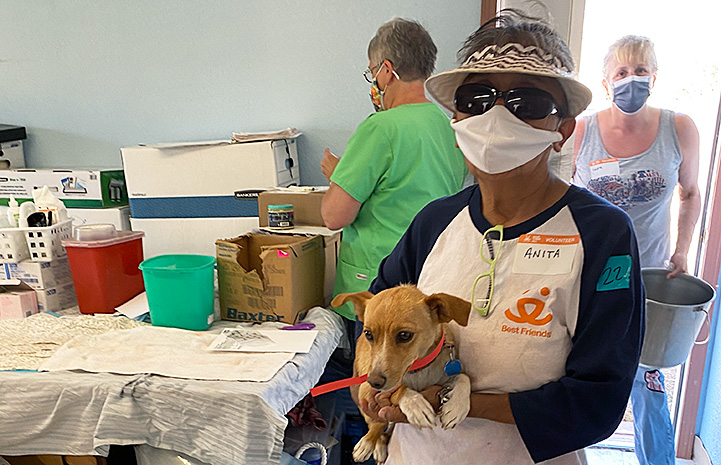 Alex sees the consistency of such events as key to providing a level of care otherwise unavailable to the Navajo Nation’s residents.

“Coming to these communities so often gives them a chance to get post-surgery follow-up, booster shots for their puppies and more long-term treatment for complex medical situations,” Alex says. “Our mobile unit also allows us to reach everyone who needs assistance, including those people who can’t come out to an event held in a community like Kayenta.”

Having frequent interactions also means the Parker Project can solve for some unique challenges. For instance, Alex says she often cannot send medication that needs refrigeration home with families. “A number of people don’t have a fridge because they don’t have power in their homes,” she says. “In each instance, we have to come up with an alternative to help the animals get the care they need.”

The frequency of the clinics also means more lives saved. Take Patches, a very sick little pup who showed up at an event in late May.

“We were visiting a community that hadn’t received services in over a year due to COVID,” Alex says. “Patches showed up in the bed of a pickup truck with his four bouncy siblings — only Patches was not bouncy. He couldn’t even lift his head up, he was so sick with parvo.”

After The Parker Project’s medical team stabilized Patches, they sent him home with all the supplies needed for his person to get him through the often-deadly virus. His dad took Patches home and diligently gave him fluids and fed him with a syringe. 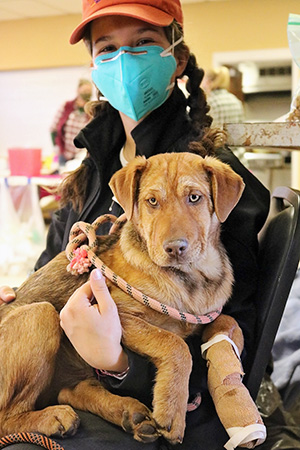 “Months later, we found ourselves back in the same community, checking in a now-healthy Patches and his four sisters for surgery,” Alex says. “He was neutered that day and will now live a happy life.”

Then there’s Barron, an injured dog who needed his leg amputated. The Parker Project worked in conjunction with Moab-based Underdog Animal Rescue and Rehab to make it happen.

“Barron received this necessary surgery thanks to some generous donors,” Alex says. “When he was reunited with his person, it was a tear-jerker for sure. The owner was beside herself and so thankful that the help he needed was within reach.”

For a more in-depth look at how Keith and Michelle are working with people in these rural areas to care for their pets, listen to the Best Friends podcast “Helping people and their pets on the Navajo Nation.”

Photos courtesy of the Parker Project and Patty Hegwood