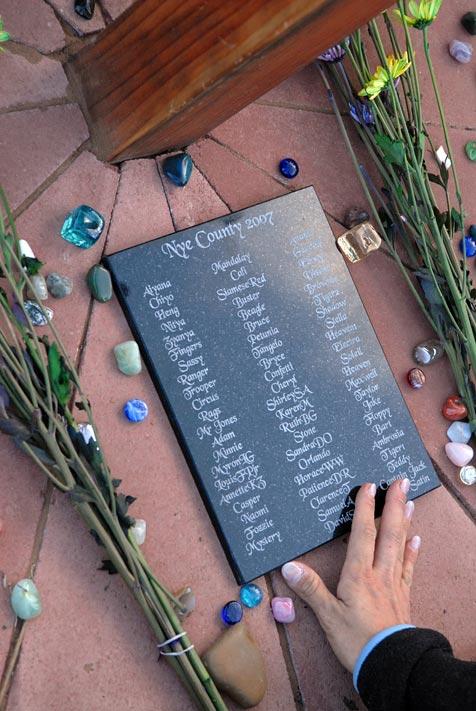 On the evening of March 31, a large group of people gathered at Best Friends Animal Sanctuary to honor the cats who passed over the Rainbow Bridge during the Great Kitty Rescue in the Nevada desert.

A moving memorial service for the cats

Volunteers who had rescued cats from cat hoarding situation in Pahrump, Nevada, came to Best Friends from all over the country to take part in the service. As we intoned the names of the cats and other small animals, the chimes of Angels Rest, the Sanctuary’s pet cemetery, stirred in the breeze and added their sweet music to a ceremony heavy with memory and feeling. The sounds of soft flutes greeted everyone as we arrived to find 79 plaques set in the earth beside a Prayer Pole. Together, we replaced the wooden stakes with permanent name markers identifying the animals for whom help came too late.

As sad as the occasion was, fine memories were shared among the participants. Stories were told about the invaluable volunteers and local community of supporters who brought meals in daily for everyone struggling to save the cats.

The Great Kitty Rescue has been called the largest successful cat rescue in American history. Not only did it prove that people could step into a wretched situation and create change, it has since shown how legal tenacity can force acknowledgement of crimes against animals in court. On March 13, the Nye County district attorney charged Sheri Allen, the former president of FLOCK (For the Love of Cats and Kittens), with multiple counts of animal cruelty.

Further landmark action on the part of Best Friends: Hundreds of the cats, who were traumatized and unmanageable at first, were socialized so they were able to be adopted. Building on their intuition and deep love of the cats, Best Friends caregivers and behavior specialists developed a new socialization process for teaching cats to overcome their fear and trust again.

Most of the 800-plus cats have been successfully adopted; 57 are in special care at Best Friends. Soon, most of them will be ready for good new homes, too. Terrified cats like Bambino and Audrey, who used to lunge across a cage to lash out at their caregivers, now eagerly await the next stroke of a caring hand.

"Every day is a miracle here," says Terri Gonzales, one of the caregivers. You see it in a cat’s eyes the moment she decides to let down her defenses and be loved instead."