How a pig went from biting people to begging for walks

Diesel grew up in a loving home where he had the honor of being the only pig in the house. That might sound nice, but it spelled trouble for the cute pink pig with black spots.

By his fourth birthday he’d become unruly and even started biting people, which earned him a reputation for being aggressive. But since he arrived at Best Friends, he’s taken a crash course in great piggy behavior, and now he’s a favorite walking buddy for staff and volunteers. 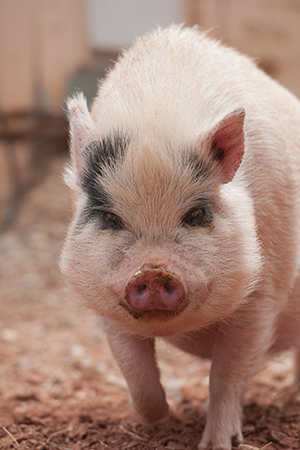 Diesel might have been labeled an ornery pig because of his tendency to bite, but it’s unlikely that he actually meant to hurt anyone. He was young with energy to burn, and using his teeth became his go-to way of communicating what he wanted. It wasn’t his fault because he’d never really had the opportunity to learn how pigs should behave with people. Part of the problem was that he never learned about boundaries from others of his own kind.

According to Jen Reid, manager of Horse Haven and Marshall’s Piggy Paradise, pigs that don't have the opportunity to regularly interact with their own species may start having problems with people. “It seems to happen because what is normal pig behavior and is OK to do with another pig (such as posturing and challenging for dominance) is not OK to do with humans,” she says. “Additionally, humans often tend to unintentionally reinforce the undesirable behaviors and allow them to escalate to the point where the pigs become aggressive.” 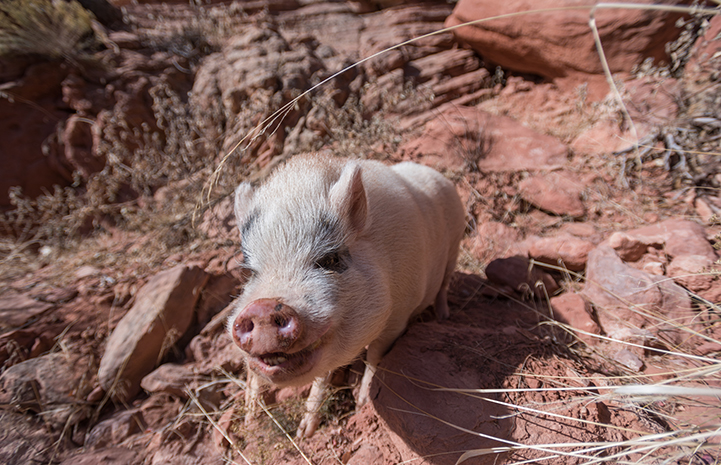 Coming to Marshall’s Piggy Paradise marked the beginning of big changes for Diesel. The first order of business was for his caregivers to utilize Parelli Natural Horsemanship games (which aren’t just for horses) to teach him boundaries in a friendly, nonthreatening way.

Diesel also started doing target stick training, which meant that he learned to touch his nose to a tennis ball on the end of a stick to get a treat. This helped him learn to follow his caregivers, because each time he touched the yellow tennis ball when asked, he got a tasty almond or piece of dried fruit. That’s how his love of walking began.

Staff members started taking him hiking on the less-traveled paths around Angel Canyon. On those hikes, he wasn’t asked to do anything except enjoy a little extra exercise and freedom. He loved it.

Combined with his training, exploring the sandy trails through sagebrush and cedar trees worked wonders for him. But there was something else: After living only with people (and not being around other pigs for most of his life), Diesel was gradually integrated into the pig community at Marshall’s Piggy Paradise. For the first time, he learned to live peacefully with and take social cues from others of his own kind. 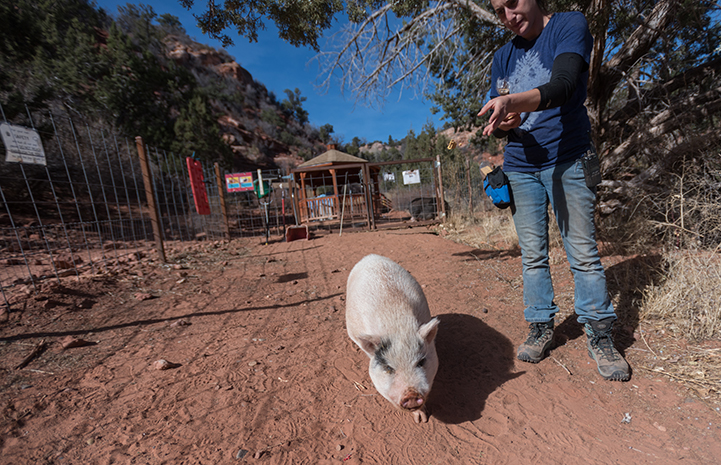 An ornery pig no more

Training, hiking and making new human and pig friends made a world of difference to the once-troubled fellow. Now, he’s much less likely to use his teeth to ask for attention and treats. He’s gone from a notoriously ornery pig to a sweet and friendly guy who looks forward to spending time with people.

​Today, when Marshall’s Piggy Paradise caregivers and volunteers open Diesel’s gate and call his name, he perks up and comes running out. He knows that means he has the chance to go for a stroll, scarf up some tasty treats and impress everyone with his perfect pig behavior. 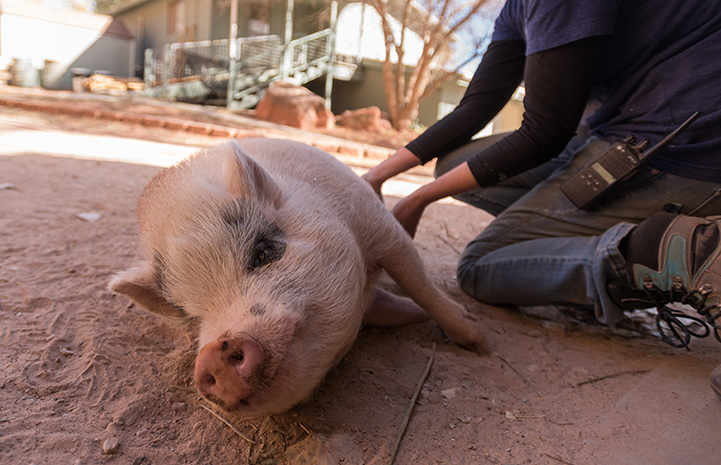