Patrick had a rough start in life. He landed at the Harris County Animal Shelter in Houston, Texas, where he was brought in as a stray and let’s just say he struggled there.

By all accounts, things weren’t looking good for Patrick and the writing on the kennel card proved it. Notes from shelter staff indicated that he’d jump and bite at the leash when people tried to walk him, and he had heartworm disease. With dozens of pets arriving at the shelter every day, a big, black pit bull mix with health and behavioral challenges would be at risk in most shelters. But please postpone the pity party for Patrick.

Although fate may have dealt him a bad hand, destiny had something special in store for the three-year-old dog. Destiny kicked into high gear when he came to the Best Friends Lifesaving Center in Salt Lake City. 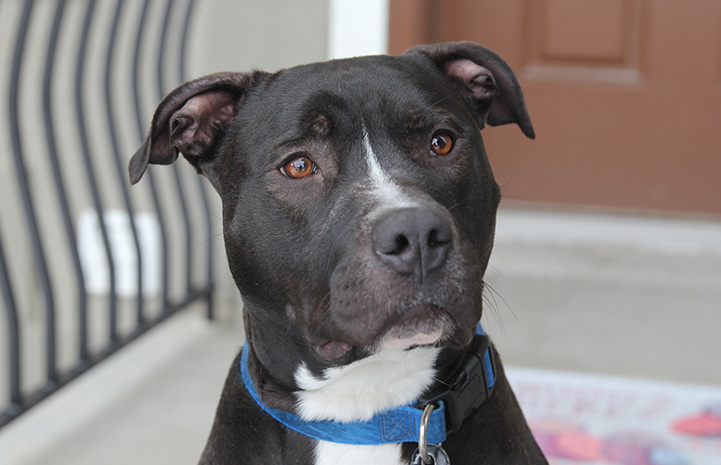 Not exactly a model citizen — yet

During Patrick’s first days at the center, his behavior was quite a challenge. “He was mouthy, overstimulated and would bite at people’s jackets, treat bags and, really, anything he could get his mouth on,” says Megan McCloud, program support lead for Best Friends in Salt Lake City. “He didn’t mean it aggressively but (his biting) would escalate in our dog kennel area.”

After giving Patrick time to settle in and watching to determine if a routine would help his behavior (it didn’t), staff placed Patrick with his first foster family to give him a break in a home. A change of scenery can do a world of good, after all. In Patrick’s case, it took five changes of scenery to get it right.

It turned out that simply going home didn’t make Patrick’s behavior challenges disappear. In many cases, a home environment is all it takes to turn things around for dogs struggling in a shelter environment — but not Patrick. Finding a foster home for him that stuck wasn’t easy — that is, until Megan found a foster home that was a better match than anyone could have ever imagined. 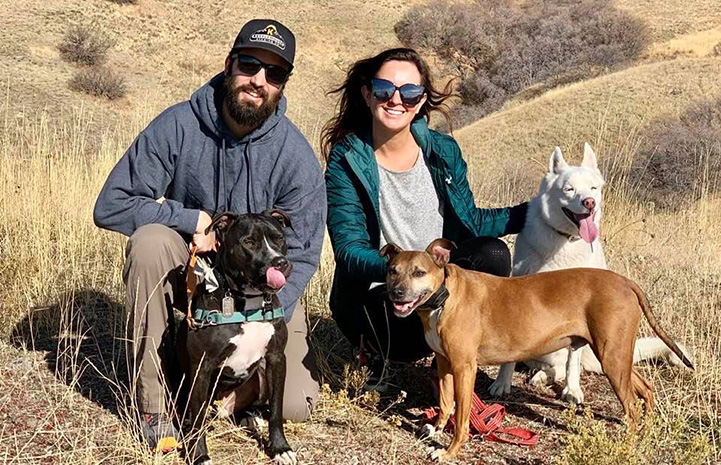 Foster family rises to the challenge

Ashley and Travis Tzioumis are dedicated foster volunteers with extensive experience helping dogs like Patrick. They had just completed fostering another dog who got adopted when Megan reached out to Ashley once again. She was looking to place two dogs in individual foster homes: Rose, a sweet puppy who resembled the Tzioumis’ previous foster pup, or Patrick, who was somewhat infamous.

“I knew all about Patrick and was hesitant to take on another difficult dog,” says Ashley. “I was leaning toward Rose because the last dog we fostered looked just like her.” After contemplating between fostering Rose or Patrick with her husband and explaining Patrick’s circumstances, Travis did not waver in his decision.

“I want Patrick. He needs us,” said Travis. So, in May of 2019, Ashley and Travis took on the challenge of bringing home their new houseguest and bracing for a demanding and lengthy stay until Patrick was adopted into a permanent home. 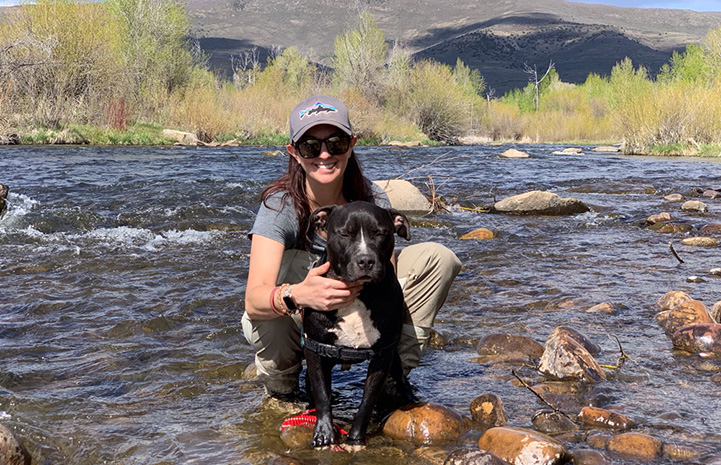 When Patrick first arrived at Ashley and Travis’ place, he was just as difficult as he had been in his other foster homes and at the center. He was unaccustomed to and uncomfortable with receiving affection, did not like to be petted and couldn’t sit still or stay calm when Ashley or Travis were moving around the house. Patrick barked excessively, jumped nonstop at the door and refused to cooperate when people tried to take him on walks. Endless activities that included daily walks, runs and trips to the dog park were still not enough to tire him out. Needless to say, it was a challenging time in the Tzioumis home.

“The first few weeks were hard. A true tale of blood, sweat, and tears as he challenged us, relentlessly testing our patience and our sanity,” says Ashley. “He rarely sat still, constantly demand-barked at us, and tried to destroy anything and everything he could find.”

The Tzioumis’ two resident dogs, eight-year-old Bert and 10-year-old Nikita, were used to living with foster dogs in their home. They had developed a policy of peaceful coexistence with the other dogs Ashley and Travis took in on a temporary basis, and it was no different with Patrick.

After about a month, Patrick finally started to settle into his life with the family of four. At the center, he had always shown an affinity toward other dogs and began to ingratiate himself with his foster siblings, forcing Bert to snuggle and Nikita to play with him. And though he was difficult for his foster parents, he adhered to the hierarchy of the canine kingdom and displayed respect for Bert and Nikita’s personal space, toys and food.

Before long, the three dogs developed a reciprocal relationship with a healthy daily routine: Mornings were reserved for playtime between Patrick and Nikita. Afternoons were dedicated to patrolling the yard for crime with Bert. And evenings were when all three embraced snuggle time.

A few months later, Ashley’s parents (also known to Bert and Nikita as Grams and Gramps) visited from Chicago and were excited to meet Patrick. Bearing a striking resemblance to their dog, Rue, Patrick laid on the charm and wooed them immediately. “To say it was love at first sight is an understatement,” says Ashley.

While there’s no doubt that Rue’s doppelgänger won them over, Patrick also became a BFF with Ashley’s dad. “They spent hours playing in the yard and even had a solo photoshoot together,” says Ashley. “The weekend was filled with hikes, trips to the dog park and lots of snuggle time.”

By the end of their visit, Ashley’s parents (who once thought their daughter and son-in-law were a bit bananas for having two dogs, and even more so for fostering) were lobbying Ashley and Travis to keep Patrick. It’s no wonder Ashley credits her parents for her love for animals.

A road trip to remember

Nearly seven months into Patrick’s stay with Ashley and Travis, they planned a 10-hour road trip to Arizona to visit Travis’ family. While Ashley had some reservations about how Patrick would handle the long drive and how he would behave once they reached her in-laws’ house, Megan had faith in them. In fact, she thought the road trip was a great idea. “We didn’t have any concerns about Ashley taking him, as she knew him so well and knew how to set him up for success,” she says.

Apprehensive that Patrick would get antsy and restless during the drive from Utah to Arizona, they stopped frequently for potty breaks and walks. Much to Ashley’s surprise, Patrick was the perfect passenger. “He sat in the back seat, looking out the window like a human for the entire drive,” she says.

Traveling with pets: tips for traveling and vacationing with a dog or cat 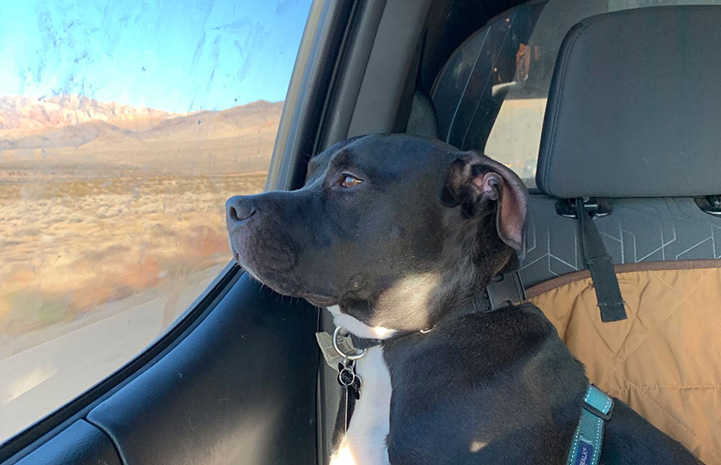 Upon reaching Arizona, Patrick showed his excitement by running multiple laps around the house and greeting the extended Tzioumis family with lots of kisses. Exceeding Ashley’s expectations, Patrick showed off his best behavior and enjoyed maximum quality time with the family throughout the week.

“He was the best boy the entire trip. He spent the week hiking, swimming in the pool, sunbathing, helping his yiayiá (grandma) and theía (aunt) make Thanksgiving dinner, and snuggling with his papoú (grandpa) while they watched football.” says Ashley. “Every night after we finished eating, he would jump up and sit on a dining room chair as if he was waiting for his dinner. It was hilarious.” 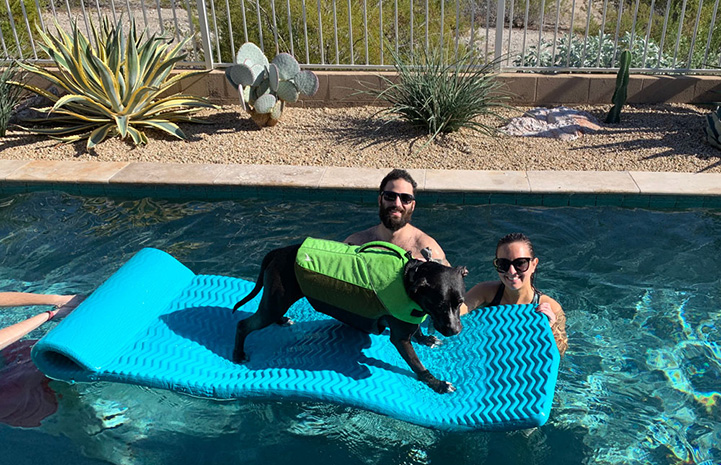 Not just another foster dog

With a successful track record of fostering more than a half dozen dogs for Best Friends and coalition partners, Ashley and Travis were well-versed with the ins and outs of it all. Growing attached to a foster pet is always a hazard of the job, but for most people who decide to foster animals, the reward of seeing a dog adopted is worth the risk of a tear-filled goodbye.

While Ashley, Travis, their families and other dogs were all settling into comfortable relationships with Patrick, he was still available and promoted for adoption into a permanent home. He’d undergone heartworm treatment, recovered well and was otherwise healthy. Twice he was on television in the hope that someone would want to adopt him. But not everyone was hoping for that.

Before Patrick’s second television appearance, Ashley’s husband dropped a not-so-subtle hint that Patrick was different than their other foster pets. Out of nowhere the night before Patrick’s big day on TV, Travis looked at Ashley and said, “I’m not giving Patrick to anyone else.”

That was early on, before Patrick had turned into a social butterfly who got along with everyone. It was before he met their families and they weren’t sure they wanted to have three dogs. Even then, Travis knew. It was the Thanksgiving road trip that made them decide that Patrick wasn’t going anywhere. He already had a permanent home. 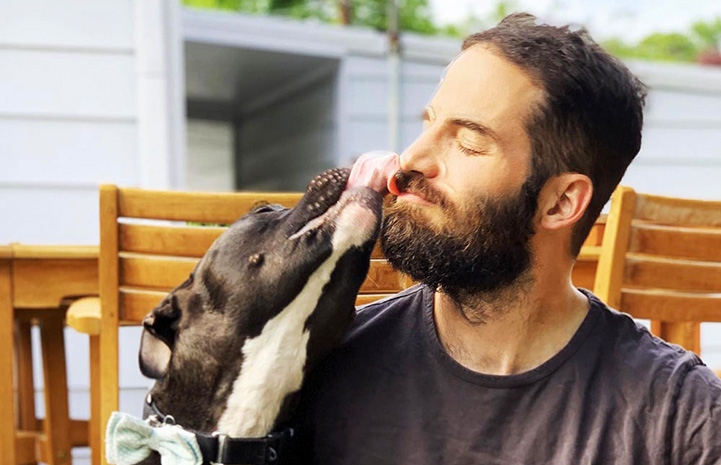 Party of five: a most positive foster-failure

Ashley and Travis say that adopting Patrick has brought everyone more happiness, love and laughter than they ever knew was possible. Before Patrick joined the household, Bert and Nikita were showing signs of their age and had stopped playing with other dogs. Now with three-year-old Patrick around, the three furry Tzioumis siblings play together all day and snuggle all night. According to Ashley, Patrick keeps Nikita young and makes Bert a little less grumpy. Once affection-averse, Patrick now jumps into his parents’ laps to snuggle.

From his tough start in Texas to his strenuous struggles in Salt Lake City, Patrick has come a long way, proving that sometimes, the fifth time is the charm. Ashley and Travis’ patience, positive reinforcement, determination and, most of all, mutually unconditional love (combined with support from two well-adjusted canine companions), helped Patrick break his bad habits and let his wonderful true self shine.

“When we decided to foster Patrick, it was because Travis knew he needed us. Little did we know that need was mutual,” says Ashley. “I think about what he went through in Texas and all the heartache he’s endured. I look at his sweet little face that doesn’t remember any of that because his life is now filled with nothing but love. He completed our little family the day we officially became a party of five, and we feel like the luckiest pup parents in the world to get to love him forever.”