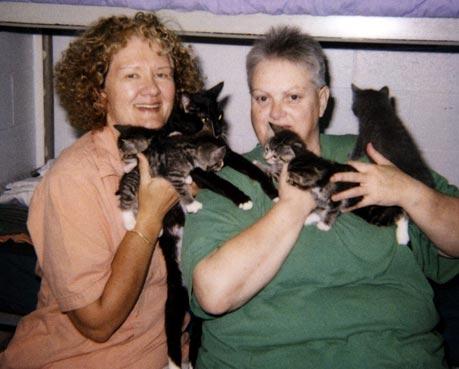 Kitten program at the New Hampshire State Prison for Women

The woman rolled over, waking up slowly to the sound of mewing coming from a cage near her bed. She knelt down and picked up the fluffy kitten who decided he needed comfort in the middle of the night. Holding the yawning eight-week-old close to her body, she found the moment just as precious as the first time she had held him, only a few weeks ago. By her own admission, this was the first time she had held anyone in 25 years. She looked up through the bars and sighed; it would be 30 more before she could even think about requesting parole.

She's not alone. There are seven other women at the New Hampshire State Prison for Women (NHSP/W) who are temporary guardians for six kittens and a mother cat who came with her own little family. The kittens were brought in semi-feral, but after some socialization with the inmates, they should be able to go to new homes soon.

Carol Whitcher, the education coordinator for NHSP/W, had been thinking about a program involving homeless animals and the inmates for a while.

"When my dad died, he was managing a school for delinquent kids on his farm," Carol remembered. He used to say, 'If people are given something to take care of, it changes them.' You become a different person once you've held a piglet or milked a cow."

Around the country, partnerships are springing up between animal shelters and prisons for a dual purpose – to socialize the animals and give skills to inmates.

Carol saw other women's prisons where the inmates worked with dogs. She knew that if she had a similar program, the women would have a better quality of life and could learn skills for employment once released. After talking up the idea non-stop to anyone who would listen, she had a visit from a city commissioner. The official had heard Carol liked to take risks and told her to "make it happen?"

During six months of research, Carol and one of the inmates made phone calls, wrote e-mails and came up with a plan for a pilot program. They wanted to start small and they wanted to do it right.

They approached the Animal Rescue League and immediately had the backing of David Betournay, the shelter manager. He thought the NHSP/W was too small for dogs, but it would be perfect for the increasing amount of semi-feral kittens that were brought to the shelter daily.

"I told him I didn't want to obligate any money from the state. But I knew money was the main reason many programs like this fail," Carol said. "So the Animal Rescue League stepped in, and will supply everything.

David, Carol and her inmate assistant have also been spending a large amount of time writing grants to help the program along. And, with the amount of media attention they have received, Carol is pretty sure this program will work.

The pilot program is intended to last eleven weeks, and the first three weeks are all about training. Eight inmates, all with GEDs and high school diplomas plus, sat through classes taught by David covering anatomy, diseases, parasites and more. They were given quizzes throughout the week and a "final" at the conclusion of training.

Eleven kittens and a mother cat were delivered to the prison, and eight surrogate moms were there to greet them. The women sleep two to a cell with the four shelter cells grouped together. Three of the cells have two kittens who are roughly ten weeks old; the other houses the momma cat – named Oreo – and her five kittens who were only a week old when brought to the prison. Every week the kittens are rotated from cell to cell so they will become acclimated to a variety of people.

Every Wednesday, David checks on the kittens and notes their progress. And every day Carol can see the changes in the women.

"One of the inmates had two days of waking up at 2 a.m. with the kittens. She is young, and this has made her think twice about when she wants to start a family," recalled Carol. "Another told me that the training and testing has shown her she can go to college when she is released."

Half of the inmates participating in the program will be released in under five years. But the other four are "lifers" and have at least 30 more years of living inside the prison walls. Despite that – or maybe because of it – bringing the kittens to the prison has caused a lot of wonderful emotion.

"There are 24 women on this tier," said Carol. "And 20 of them want to be a part of the program. We are going to repeat training in a couple of weeks for all of them so we'll be ready for any kittens who need us."

Although this eight-week session is in the early stages, two of the kittens are ready for adoption, which will open space for more kittens to start their path to a new home. Of course, that may not be too far, since the staff has fallen in love with the new "inmates."

"Already the program is a success. I can't believe how everything seems to be working out," said Carol.

"The moon must be in the right place."