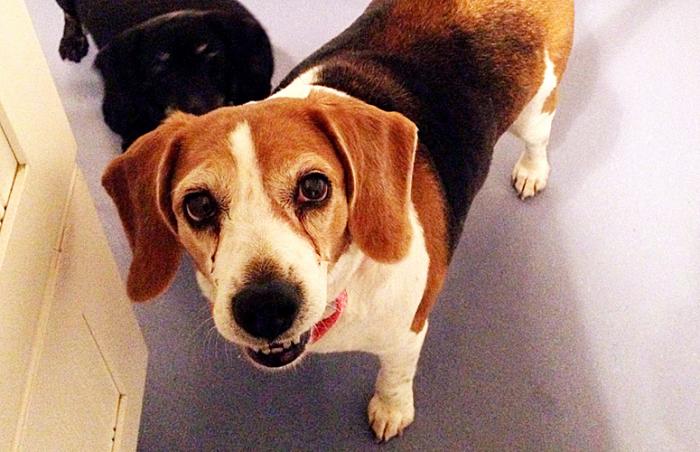 As the latest winter storm was barreling down on the Northeast, one particular event over Valentine’s Day weekend warmed people’s hearts. A Best Friends Animal Society pop-up adoption event in New York City, right next to the busy High Line, a pedestrian walkway and park, turned an empty store into Cupid’s playground for matching pets with people.

Dogs woofing and cats meowing to catch their potential new families’ attention filled the venue with excitement. People’s oohs and ahs made everyone smile — except for Earl. The beautiful grey cat hunkered down in his kennel, ensconced in so many blankets that he looked like one big pillow. Meanwhile, the goal of staff and volunteers was to ensure that each adoptable pet could be seen in the best light, even shy cats like Earl who would prefer to stay under wraps.

Best Friends is working to help New York City achieve no-kill status, and one way we’re doing it is by taking in pets from Animal Care & Control of New York City (AC&C of NYC) and finding them homes through adoption events. Over Valentine’s Day weekend, not only were pets like Earl (all originally from AC&C of NYC) hoping to find love, the shelter had a mobile adoption vehicle stationed outside the storefront, with even more homeless pets looking for their perfect home. Greta Palmer, Best Friends director of marketing, says, “New Yorkers want to adopt pets, and this type of event gets pets from the shelter out into a family-friendly boutique environment.”

When the doors opened, everything was primed and ready for dozens of four-legged New Yorkers to find love. 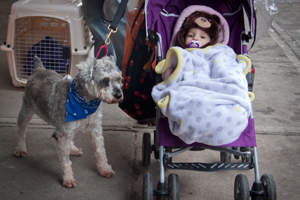 After hearing about the event on Fox 5 News, Olvid and Rosalee Rosario rolled their baby daughter, Penelope, into the venue. They had been looking for just the right smaller dog who’d be good with children. When they met Ricky, a standard schnauzer, they couldn’t take their eyes off him. He’s a handsome dog with a silver-streaked coat and the sweetest personality to boot. When the schnauzer approached their little daughter ever so gently, Olvid and Rosalee knew they’d found their new dog. Rosalee, who knew about Best Friends from when she lived out west, says, “We’re thrilled to be able to adopt a Best Friends animal in our own backyard, right here in New York City.”

Ricky, now named Tramp (after Disney’s “Lady and the Tramp”), is enjoying life as a pampered family member, sharing long walks and missed mouthfuls with his baby sister. 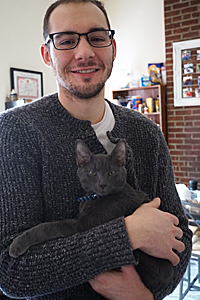 Vanessa Kong arrived with her heart set on finding either a Siamese or a Russian blue cat. She and her boyfriend, Nate, described what they were looking for to a Best Friends volunteer. They were in luck. The volunteer took Vanessa and Nate to a kennel and motioned toward a blanketed mound in the back. The couple “unearthed” the one cat at the event who happened to be a Siamese and Russian blue mix. It was Earl. They brought him to the meet-and-greet area, where he settled into Vanessa’s lap. She knew right then that it was meant to be.

“He absolutely loves to cuddle, which I can't get enough of,” says Vanessa. “As soon as you sit down he will put his face in your face looking for attention. He just settles down right into your lap or next to your leg and you can feel him purring.”

By the end of the event, 61 dogs and cats found loving families, including one slightly shy cat (Earl) and a purebred babysitter (Tramp), all ready to start loving their new lives.