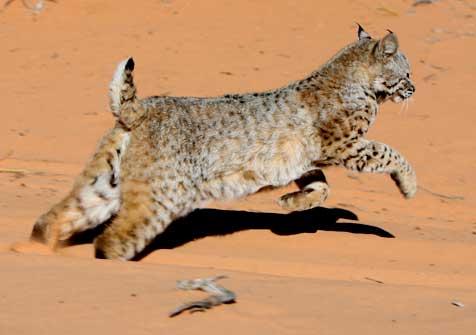 A canyoneering guide found the baby bobcat last summer at the bottom of a slot canyon in southern Utah’s back country. Dehydrated, malnourished and covered in skunk juice, the bobkitten had more than likely been swept away in a flash flood, trapped in the canyon and orphaned as a result.

Weighing only four pounds, she was just a few months old when she arrived at Wild Friends, the wildlife rehabilitation center at Best Friends Animal Sanctuary. You could hold her in the palm of your hand.

On a recent Saturday morning, the now healthy one-year-old, standing about two feet high and weighing around 30 pounds, charged out of a carrier and back into the wild. The release marked the end of a successful recovery – indeed, a successful rearing – at Best Friends, and the beginning of a new life in her natural habitat.

Licensed wildlife rehabilitator Carmen Smith and sub-permittee Barbara Weider had been hoping all along for a spring release. Spring is the season when prey is most abundant, so it’s an excellent time to release a predator, especially one with little hunting experience in the wild. They kept a close eye on the bobcat’s condition and behavior by remote camera in the weeks leading up to the release and felt certain she would do well fending for herself.

"We know she’s incredibly fast," Barbara said just before the release. "And she’s got the stalking and pouncing activity down."

For the release, the bobcat needed to first be lured into a carrier for transport. Carmen devised a plan: She would place a dog trap in the bobcat’s enclosure and put her food in the trap. With the trap door kept open, the bobcat would get used to going inside the trap, so that when the time came to transport her for release, all Carmen would need to do is activate the door’s trip wire and wait for her to go in and eat. It worked!

On the morning of the release, with the bobcat safe in the trap, Carmen and wildlife caregiver Todd Moore loaded her into the back of an SUV and drove her into the vast stretch of canyon country surrounding the sanctuary, to a release site approved by Utah wildlife officials.

Carmen chose the area because it supports a large population of bobcats and also because it’s big, with very few natural or man-made obstacles to block her from roaming. Should the bobcat find herself within a cougar’s or another bobcat’s territory, she would have more than enough room to give the presiding animal a wide berth and find territory of her own.

All signs were good when Carmen and Todd unloaded her at the release site. The bobcat was growling, but not displaying any kind of panicky behavior. Once Carmen lifted the trap door, it took only a few seconds before the bobcat burst out from the trap and went bounding across the landscape, vanishing into the juniper forest.

"I was really pleased with how it went," Carmen says. "She was obviously quite aware of what was happening, and ran away, as she should. She’s got lots of opportunities and options out there now."