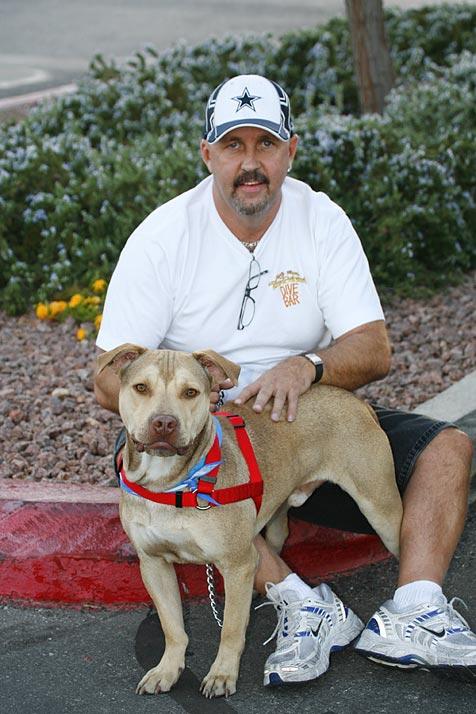 It’s moments like these that people in animal rescue live for.

Terry Magnani watched as Scooby, a pit bull mix, came out the front door of a Las Vegas PetSmart sporting a new harness and leash. On the other end of that leash was Don Green, his new person, who also maneuvered a shopping cart overflowing with dog food, treats, a new comfy bed and plenty of dog toys. Scooby’s shelter days were over.

"That was the one who put a tear in my eye," said Magnani, director of community outreach for The Animal Foundation, which operates a Las Vegas shelter. "He was one of those big, hunky bully breeds and those are the toughest to adopt out."

Although Best Friends has been holding super-adoptions in Los Angeles and Salt Lake City for years, this was the first in Las Vegas. Krause credits much of the event’s success to volunteers. "They were incredible," she said. "I was so impressed. All of them were so passionate about animals. They were so happy to be there and so excited to be part of it."

Scooby was one of more than 100 animals from The Animal Foundation to find new homes at the event. "We had an awesome event – 87 dogs and 21 cats," Magnani said. "Our goal was that nobody would have to come back to the shelter and they didn’t. It was so wonderful. I have always said we need to be out in the community. That’s how we get adoptions."

Adoption events at venues like PetSmart draw people who wouldn’t go to a shelter. Magnani said some people avoid shelters because they feel the experience would be too emotionally wrenching. Others are shopping for a purebred and don’t think they’ll find the pet they’re looking for at a shelter. But Magnani said a shelter is the first place these people should look. After all, one in four dogs in a shelter is a purebred.

But it’s the bully breeds that have the toughest time finding their way out of shelters and she is seeing more and more of them in the kennels at The Animal Foundation. Some are found wandering Las Vegas streets. Some are abandoned after losing in the dog-fighting ring. Others are the victims of backyard breeders.

Magnani said the local papers have page after page of "pit bulls for sale" ads. And if breeders can’t sell the dogs, they dump them off at The Animal Foundation. "There’s an overabundance of pit bulls. Once a pit reaches two years old, no one wants it because they don’t know its history."

Scooby was one of the lucky ones, Magnani said. "I thought that Scooby would be one of the last two or three to get adopted, if at all. I thought he’d have to go back to the shelter with that look in his eye that said, ‘How come everyone else got adopted but me?’"

But that didn’t happen. That’s because Green, a local business owner, didn’t see in Scooby a mean, unpredictable dog, which is how the mainstream media so often portrays pit bulls.

"When I saw Scooby, I saw a gentle dog with a big heart, and that’s what I was looking for," Green told Best Friends. Today, Scooby is living the good life with plenty of love, treats and a comfy bed.

The memory of Scooby walking out the front door of PetSmart with Green will continue to remind Magnani of why she got into animal rescue in the first place. "That was the happiest dog on the planet," she said. "His feet weren’t even touching the ground."

Looking for the perfect pet?

Bypass the pet store, which fuels the puppy mill trade, and stop by your local shelter or rescue organization instead.