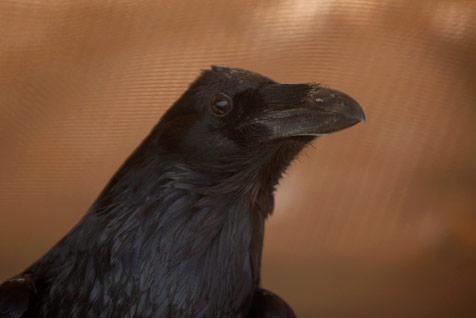 Wild Friends often receives several animals of the same species at the same time, especially in the spring, when newborns are sometimes orphaned.

"This is how the cottontails and songbirds usually come in — often in singles or small groups that then go back out together," says Carmen Smith, licensed wildlife rehabilitator and manager of Wild Friends. "We have never had this before with ravens though."

The first call came from a woman in St. George, Utah, who had taken over the care of a raven her neighbors had been keeping as a pet. The neighbors had had the raven for a few years, and had even been clipping the bird’s wings. The woman kindly offered to take the raven when the neighbors were about to move and leave the bird behind.

At some point the woman may have realized that, without a proper license, what she (and her neighbors before her) was doing — keeping a wild animal in captivity — was illegal. She called Wild Friends and was thrilled to learn that she could leave the bird in its care. Carmen and Best Friends licensed wildlife rehabilitator Barbara Weider are hopeful they’ll be able to eventually release the raven, but that depends on whether he can learn to be wild again.

Raven at the animal shelter in Hurricane, Utah

The next call came in a week-and-a-half later from Hurricane, Utah, about 70 miles west of Best Friends. A Best Friends member, who stops in now and again to check on the animals at the town’s shelter, informed Wild Friends that a raven had been left there, having been shot. The woman drove the raven to Wild Friends, where Barbara and Carmen were able to remove the pellet.

But later test results showed the bird also had West Nile virus. Carmen thinks either the toxicity from the lead pellet or the West Nile disease, or a combination both, severely weakened the bird’s immune system to the point where he was susceptible to all kinds of infections. The raven, unfortunately, passed away.

Raven found on the ground at Pipe Spring National Monument

Another raven arrived at Wild Friends in early March having been found on the ground at Pipe Spring National Monument, about 25 miles west of Best Friends. An examination showed that the bird had a fracture in her forearm. Thankfully, the fracture had already calloused and the bone aligned correctly, the break well on its way to healing.

"Sometimes the inflammation around the fracture aligns the bone just fine," Carmen says, adding that ravens and crows often heal from fractures on their own and can be up and flying within three weeks of the injury.

They kept the bird’s wing wrapped for a few days before beginning physical therapy that loosened up the tendons and ligaments. The bird was then released at a location near where she was found.

The string of raven calls continued a few days later when a couple in Page, Arizona, about 70 miles east of Best Friends, reported a raven grounded in their backyard. Wild Friends staff found he had severe puncture wounds and he did not survive.

Another raven in Hurricane who had been shot

Two days later another call came into Wild Friends, about a raven who had been found shot in Hurricane. The pellet had fractured a bone in the bird’s wing. Thankfully, Carmen and Barbara were able to safely remove the pellet without the bird's having to undergo surgery. The bone was already on its way to healing.

The first and last ravens are currently living side-by-side in separate enclosures, and already the raven who used to live with people is learning from the other how to be wild again. If all goes well, Wild Friends will eventually move the two together into a much bigger single enclosure, where the tamed raven can continue learning from the wild one, and from where they can eventually be released together.

"They are helping each other," Barbara says. "Ravens are such social flock birds that it makes a huge difference to them to be able to interact with their own kind."