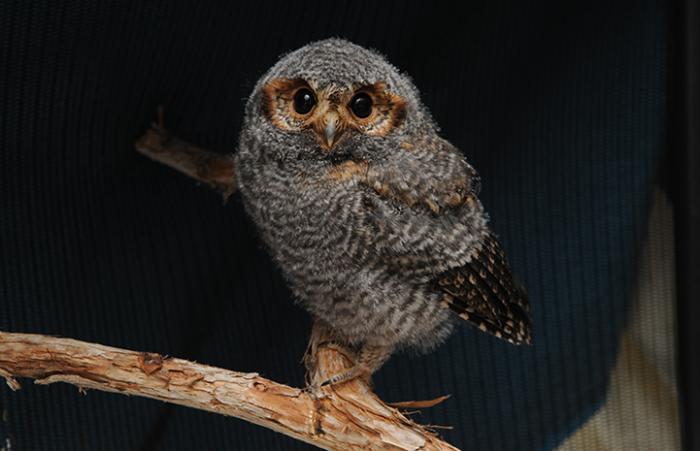 Rescuing a baby flammulated owl from a fire 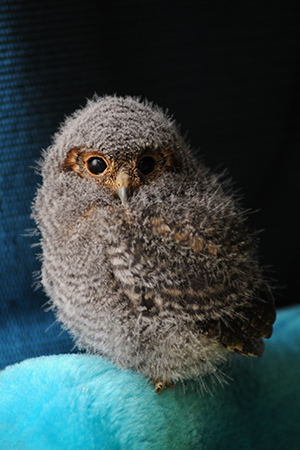 Working along the north rim of the Grand Canyon, the fire crew supervisor spotted a tiny owl being carried by one of his firefighters. The firefighter had rescued the little guy, who’d been found on the ground after the fire crew had cut down trees to stop a fire from spreading. He was unhurt, but there was no nest to put him back into, and he wouldn’t have survived out in the wild without his parents.

While the little owl is growing up at the Sanctuary, without his natural parents, he’s getting the best upbringing an orphaned owl could hope for, and once he is big enough, he’ll be released back into the wild. For now, all he had to do was settle in and grow up big and strong — though “big” is a relative term, especially for a tiny species like him.

What to do if you find an orphaned baby bird

As a flammulated owl, he is one of 10 species of owls native to the area and is similar in size to a northern pygmy owl. Like all owls of his species, when full grown he’ll be just six inches long, with a 14-inch wingspan.

When the little owl arrived at Best Friends, he was just starting to fledge; about 20 percent of him was covered in feathers and the rest was all fuzz. At first, he could fly just a little — down, but not up again. He spent most of his time perching. He also made a little trill, a feeding call, which he’d soon outgrow.

His adorable, gentle “toot-toots” made him sound like a miniaturized version of a great horned owl. As cute as the little owl is, though, he’s being treated with the hands-off approach, with his caregivers interacting with him as little as possible, to ensure that he doesn’t get too used to people, which wouldn’t serve him well once he’s released.

His temporary habitat is designed to keep him safe during his stay at the Sanctuary, but to mimic his natural environment as much as possible. He’s being housed in one of the specially designed porches at Wild Friends. In the ceiling is a webcam, so his caregivers can keep an eye on him while at the same time minimizing human contact.

The owl now hunts by himself and is fond of catching the insects, crickets and moths that wander onto his porch. Unlike some species of owls, he doesn’t fly along, watching the ground looking for his dinner. Instead, he stays perched, and when he spots something below, he pounces. He’s quite fierce, and still very wild, so he’ll have no trouble adjusting to being back in the wild when he’s released.

As the weeks have passed, the little owl has matured, and his instincts have served him well. The porch provides a huge space for him to fly and get exercise, and he flies beautifully now, both up and down. He is nocturnal, alert at night, and perches, mostly with his eyes closed, in the daytime. 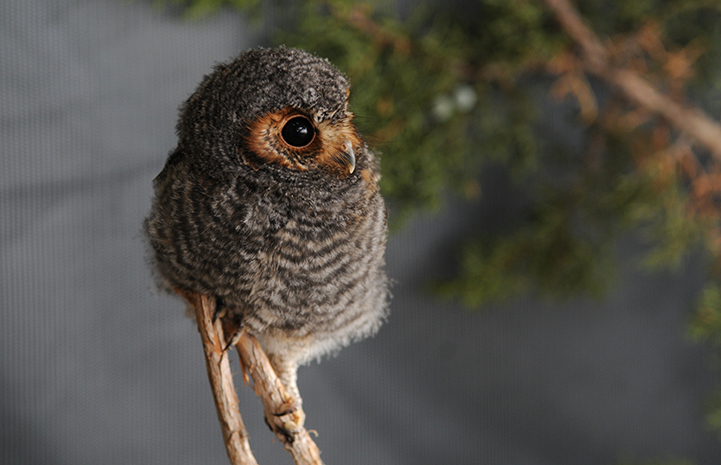 Soon, the owl will be released back to the wild. His natural home would be in an old-growth stand of ponderosa pines, so he’ll be dropped off in Arizona, in a stand of those trees, south of the Grand Canyon. That will make his first couple of days a bit easier, since he won’t have to tackle the huge expanse of the Grand Canyon as he flies south for the winter.

His release is being coordinated with Arizona Game and Fish, but also with his own kind. The little owl’s release will be timed to match when other flammulated owls are also flying south. They go to Central America to spend a warm, balmy winter in southern Mexico, Guatemala or El Salvador. Migrating birds are guided by their instincts, so he’ll find his way to his winter home, and then back again in the spring. We wish him a very happy journey and many warm winter days farther south.

Check out Wild Friends at the Sanctuary