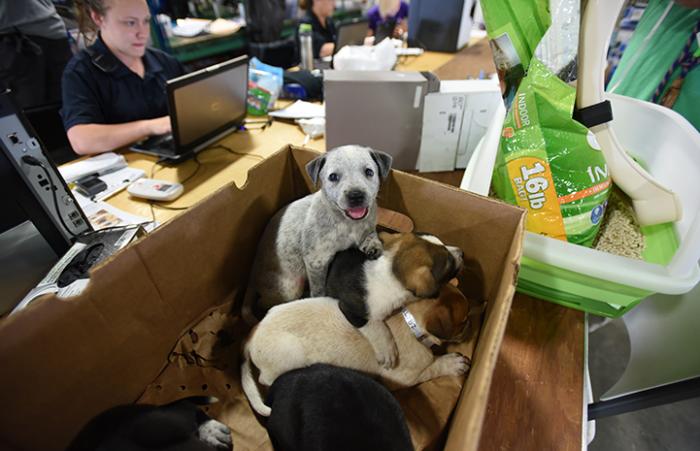 A litter of puppies in a cardboard box, an 18-year-old cat, a black-and-tan dog named Suki: These are some of the first animals to land at the Rescue and Reunite Center in conjunction with the Montgomery County Animal Shelter and Best Friends Animal Society. They survived Hurricane Harvey, the worst natural disaster to hit the United States since Hurricane Katrina. And it is estimated that thousands more will need rescuing and sheltering just like them.

“We have about 30 Best Friends staff here now and more on the way, as well as 150 volunteers who have signed up and are ready to be deployed,” says Patty Hegwood, emergency response commander. The Rescue and Reunite Center is a command post and staging area operating in conjunction with Montgomery County Animal Shelter. It will be the base of Best Friends’ rescue and reunion efforts for the pets in the greater Houston area displaced by Hurricane Harvey. Supplies are pouring in from around the country to handle the influx of animals in need.

“People’s pets are still stranded in homes, and Best Friends is receiving word of animals in need at shelters and rescues in a huge area.” Patty says, “We are getting set up as quickly as possible, because we’ve got teams out picking up animals right now, and the calls for help just keep coming.”

Pets already taking shelter at the Rescue and Reunite Center arrived from the huge swath of flooded area surrounding Houston. The puppies were brought to the rescue center after a resident handed the box to her neighbor as she was scrambling to leave her flooding home and asked her to please take care of them. The neighbor did, by getting them to safety at the rescue center. 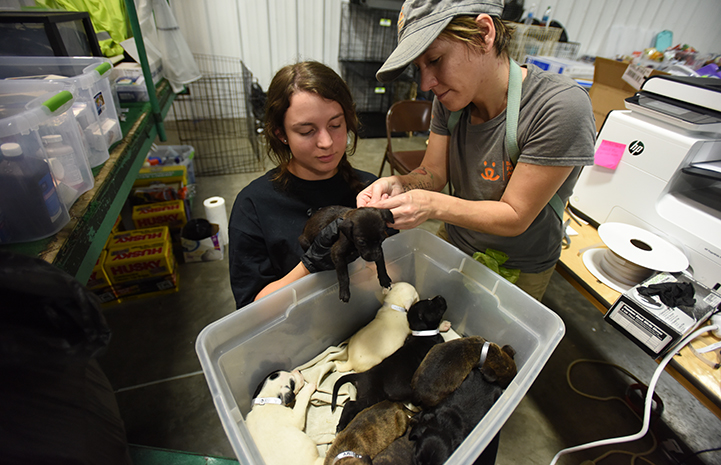 The center is within walking distance from a Red Cross shelter, and many people are taking comfort knowing that while they’re safe in a shelter for people, their pets are close by. Sarah Shuert is one of those people. Suki, her sweet black-and-tan dog only had to take refuge at the center for a few days before Sarah was able to arrange a place to stay where he can come, too. 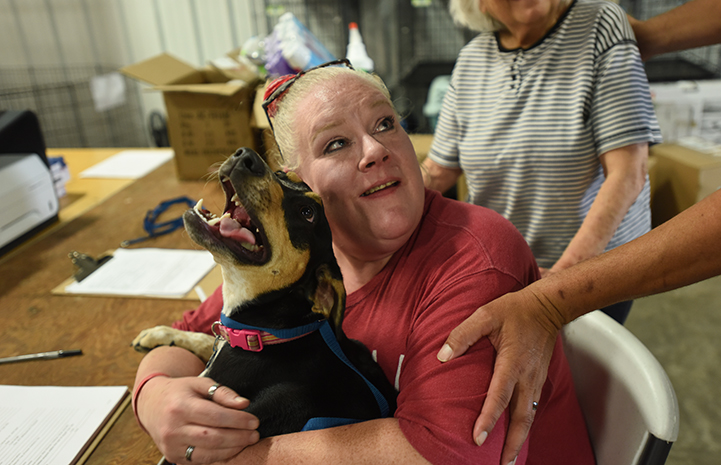 “It was so hard to sleep without him,” she says. After surviving a flood together, they won’t have to miss each other anymore. 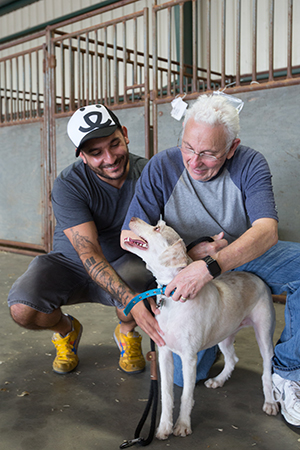 A pair of dogs named Sadie Mae and Winston are in the same lucky category as Suki. Their human family members are also nearby at the Red Cross shelter. Kathy Rabone and her husband Tony were eventually evacuated from their flooded home with the help of first responders. They lost nearly everything, watching as their home filled with floodwater and debris. What they didn’t lose were Sadie Mae and Winston, because as Kathy and Tony landed at the Red Cross center, their two dogs were brought to the Best Friends center, where staff and volunteers are caring for them around the clock.

“I am just so happy there was a place for them,” Kathy says. “We could have lost them. And I don’t know what we’d do without our dogs.”

In the first day and a half, about 100 pets arrived at center, but staff and volunteers are building out capacity to house around 1,000 animals, and as the flood waters subside, the number of animals at the rescue center will rise. But also growing each day are the piles of cat and dog food, crates and blankets donated by people who live as far away as San Antonio and are willing to make the three-hour drive to Conroe with one thing in mind: helping save animals.

“I have never seen anything like this,” said volunteer Vickie Voltz. “One eye cries for what we have lost, while another eye cries for how much we’ve come together.”

Keeping pets calm after the storm

Today, the puppies who came to the rescue center in a box aren’t cuddling up in fear, but in comfort. They’re no longer afraid, and like all the pets who come to the center, they’re now getting any needed medical care thanks to a group of volunteer veterinarians.

“A big part of the job is making sure the animals are as comfortable as we can make them,” says Patty. The Best Friends cat care team and volunteers have managed to keep Bast, an 18-year-old arthritic cat, eating — no easy feat, considering Bast and his mom, who is staying at the shelter nearby, just lost their home. 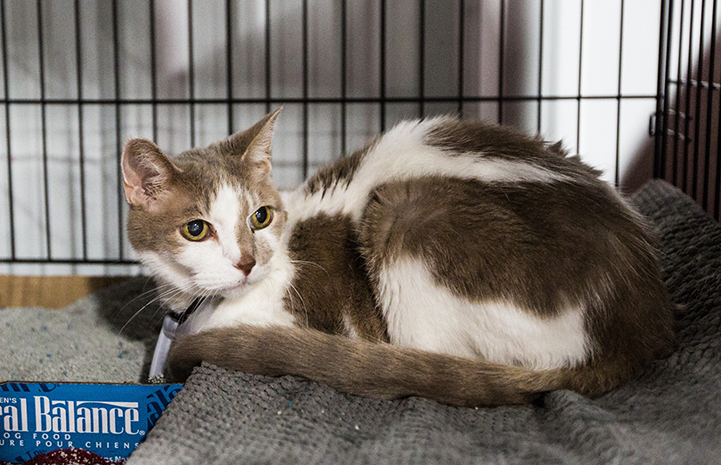 Love gets them through

Kathy and Tony Rabone come to the rescue center every day to see Sadie Mae and Winston. Ask Kathy where their next home will be. But ask her about her dogs, and the care they’ve received at the rescue center, and she’s all smiles.

“It means the world to me to know that they’re so well cared for,” she says. “There is so much love for the animals here. And it is helping us get through the day.”

Read more about the Rescue and Reunite Center in our latest blog entry.