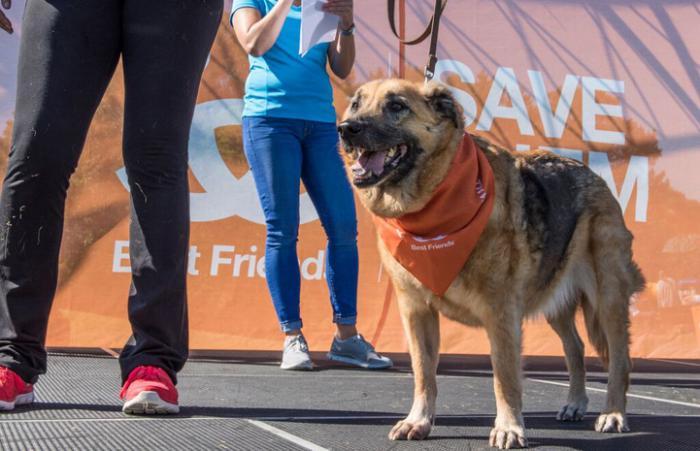 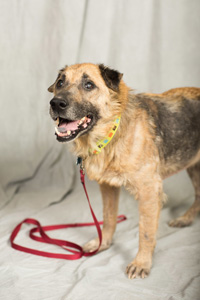 Sure, the event is called Strut Your Mutt. And Celeste, a shepherd mix, took the name to heart. Like a seasoned pro, she worked the stage at the Minneapolis–St. Paul, Minnesota, Strut Your Mutt sponsored by BOBS for Skechers. After an incredibly bleak past, Celeste got her moment to shine, and it changed her life forever.

Participants at the fundraising dog-themed festival, organized in 12 cities across the country by Best Friends, had just finished the dog walk and 5K run. On the main stage, prize and award presentations, contests and entertainment were all about to begin. But first, it was time to recognize the participating organizations and meet one adoptable dog from each one.

That’s when Celeste, looking regal, stepped out, with eyes bright, head held high, and a smile as wide as the Mississippi River. With such confidence, it’s hard to imagine that for Celeste, the act of raising her own head was once something to celebrate.

Dog with a difficult past

“If I had to describe Celeste in one word, it would be determined,” says Lynne Bengtson, executive director of Safe Hands Rescue, a Best Friends No More Homeless Pets Network partner group that participated in the event. Like all Network partners, Safe Hands pledges to help end the practice of killing dogs and cats in shelters. In return, Best Friends helps partners with things like volunteer recruitment, funding and more.

Lynne first learned about Celeste when she heard about some dogs brought to a Kentucky shelter. All of them were in bad shape, but what Lynne saw shook her to the core.

A dog in need of help

With a blanket of infected skin resting over her skeleton, Celeste looked more like a big earthworm huddled on the floor than man’s best friend.

“When you pick up a big dog, you expect at least some weight, but with her, there was just nothing there,” says Lynne, who describes Celeste as the worst case she’s ever seen. She rushed Celeste to an emergency vet clinic near the shelter, certain she was delivering her to a humane end.

The vets uncovered a host of medical problems: terrible mange, heartworms, severely infected eyes with one sporting a painful ulcer and broken teeth. And the dog, estimated to be between eight and 10 years old, also was starving.

Celeste had everything going against her, yet her rescuers felt she could be saved. During a month-long stay in the Kentucky clinic, Lynne received daily updates: “Today she raised her head.” “Now she’s staying awake for a full hour.” “She went outside for the first time.”

During a recuperative stay in a Minnesota foster home, Celeste slept about 20 hours a day. But as she came back to life, everyone saw her determined spirit. It took every ounce of strength for her to get on the sofa for the first time, but she made it. 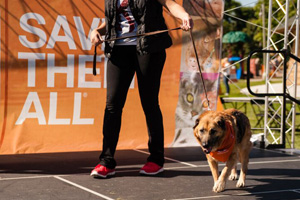 One week before Strut Your Mutt, participating partners learned they could showcase an adoptable dog on stage. Celeste’s gorgeous black-and-tan coat had filled in, so Lynne decided it was her time.

Lynne and Safe Hands volunteers had a great time on event day. “So many of our past adopters came out with their dogs and we got to see everyone,” Lynne says. “And just being around so many people who love animals and want to do something to help is just an amazing atmosphere.”

Her instincts about Celeste proved to be right. In the audience of some 550 attendees (and more than 400 dogs) was Kristina, who upon seeing Celeste on stage, just knew that this was her dog. She enjoyed spending a lot of time with Celeste, who apparently felt the same and tried to follow Kristina afterward.

One week later, Kristina welcomed Celeste home for good. The dog who had hit rock bottom is living the best possible life. She’s safe, healthy and loved — thanks to a rescue group that refused to let her fade away, and a special event where she got her moment in the spotlight.

“This was my first time at Strut Your Mutt,” says Lynne, “I’ve already told everyone to put this on their calendar for next year.” By then, surely there will be another dog who, like Celeste, needs that extra boost to help find her happy ending.

Help bring more events like Strut Your Mutt to the animals by making a gift.