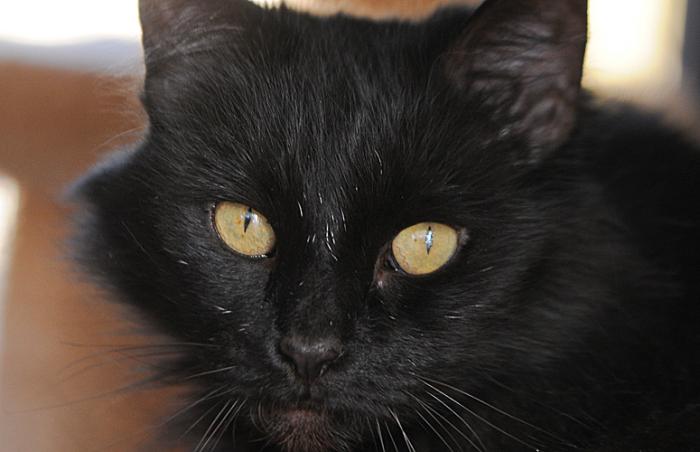 Lady Opal is a true gem, and until recently, she was also a hidden one. Because she’s neither the friendliest nor the flashiest cat in Cat World, Lady Opal was often overlooked by adopters. But Best Friends’ recent Back in Black promotion changed that.

Life was difficult for Lady Opal before she came to Best Friends Animal Sanctuary. A shy girl with long, silky black fur, she was one of more than 800 cats rescued by Best Friends from a terrible hoarding situation in Pahrump, Nevada. That rescue, which became known as the Great Kitty Rescue, happened in late 2007 and early 2008.

Because she hadn’t been socialized, it took a long time for Lady Opal, then three years old, to learn to trust people. At first, she diligently avoided them, preferring to spend her time up in the rafters. While the rafters offer a feeling of safety and security for cats who aren’t comfortable around people, hiding up there meant that Lady Opal had limited exposure and less of a chance to meet someone who might want to take her home.

So Cat World caregivers worked hard to make Lady Opal feel comfortable enough to come down on her own, while still allowing her to go at her own pace. They offered her tasty treats, such as baby food, that she could lick off their fingers when she was feeling brave.

Shining a light on a shy black cat 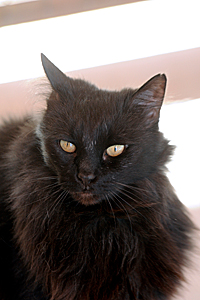 Little by little, Lady Opal’s view of people changed, and she began to show her soft side. Though she’ll probably never be a lap cat, and she doesn’t always want to be petted, once she decides she likes someone, she’s made a friend for life. In the past few years, she’s given more and more people a chance to get to know her by seeking attention not only from staff members, but also from volunteers. It was a sure sign that Lady Opal was ready for a home of her own.

But there was still the question of how to get the shy black cat adopted. For some reason, black pets often wait longer than their lighter-colored counterparts to find a home. And Lady Opal wasn’t getting any younger. Cat World staff and the Best Friends marketing department decided she was ready to be featured in Best Friends’ Back in Black adoption promotion, which helps by shining a light on darker-colored pets both nationwide and at the Sanctuary.

In early May, Lady Opal found a forever home with an adopter who knew exactly what to expect, since she had previously adopted cats from the Great Kitty Rescue. Lady Opal would be loved and respected for exactly who she is, and celebrated for how much progress she’s made over the years.

Finally, Lady Opal was getting the chance she truly deserved. But she wasn’t the only hidden gem unearthed by Back in Black. The recent promotion proved hugely successful for Cat World, helping 12 other Sanctuary cats realize their dream of finding a home. A cat named Kiki who, like Lady Opal, had lived at the Sanctuary for many years, also went home, as did several special-needs cats, including Porter, a sweetie with cerebellar hypoplasia, a neurological condition that makes it hard for him to walk and move around normally.

Now, Lady Opal is making up for lost time in her new home. She settled in quickly and it seems her difficult past is now so far behind her that she’s just happy to have a great home of her own. She’s proof that, sometimes, true beauty can hide in the shadows, but a little light can go a long way.