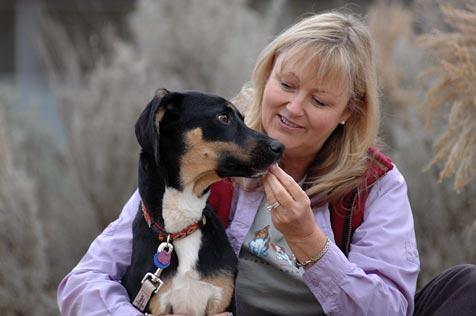 Cynde Van Fleet wasn't even supposed to be at Best Friends. That was the first obstacle fate had to blast through in this happily-ever-after story.

Cynde, a Tellington TTouch practitioner, was in Scottsdale, Arizona, with a friend for a 30th TTouch anniversary celebration when the latest TTouch seminar was under way at Best Friends. (TTouch is a technique that uses circular touches to help animals achieve better physical and emotional well-being.) She had no plans to visit the sanctuary during this particular class.

However, she'd made the "mistake" of giving her friend a book about Best Friends. When she read the book, her friend simply had to see the sanctuary for herself. And, of course, she dragged Cynde along for good measure.

So Cynde packed her suitcases and then pointed the car in the opposite direction from home. Instead of returning to San Clemente, California, she extended her trip and drove north. Since she was at Best Friends anyway, Cynde decided to help out during the last couple days of the TTouch workshop.

Cynde decided to take the class out to visit the Lebanon animals. That's when she met Kumar, a neurological dog who bobs his head all around and who can’t walk very well. Cynde had an overwhelming feeling that fate had brought them together. Her expertise as a TTouch practitioner certainly couldn’t hurt a gentle, loveable guy like Kumar, and it could even help him.

To the cheering of the entire TTouch class and caregivers everywhere, Cynde decided to adopt Kumar. His new and highly appropriate name? Karma! Karma has settled in like a charm -- even stealing and collecting toys from the other animals in his new family. From Beirut to Cynde's arms, Kumar has found his happy ending indeed.

Read about Best Friends' work in Lebanon to rescue animals.