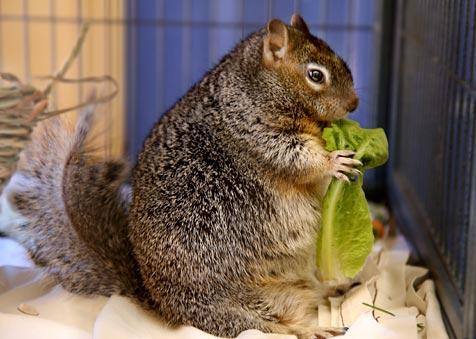 When he sits back on his haunches and stretches out his hind legs, a big puddle of fur spills out in front of him, and you can’t help but think of Jabba the Hutt. To say Twizzlers the squirrel is overweight is putting it mildly. This boy is obese, so obese that the one-foot climb from the bottom to the top of his enclosure may as well be the ascent of Mt. Everest.

The Utah Division of Wildlife confiscated Twizzlers from a couple who had illegally kept the squirrel in their home. Wildlife officials had nowhere to place the squirrel, so they asked Wild Friends, the wildlife rehabilitation center at Best Friends, to care for him.

Apparently, the couple fed Twizzlers junk food (hence his name?) and kept him in a cage without enough room for him to burn off the fat. That’s how Twizzlers became what he is today: a squirrel in dire need of a diet and lots of exercise. At Wild Friends, he’s getting both.

Like obese humans, obese squirrels are prone to heart and liver disease. Twizzlers should be tested for both, but doing the diagnostic work would mean having to sedate him—something his heart may not be able to withstand until he’s in better shape. Wildlife rehabilitator Carmen Smith thinks it may take six months before he’s in any condition to take the tests. Until then, it’s nothing but low-fat foods and lots of exercise for Twizzlers.

Find out more about wildlife rehabilitation at Best Friends