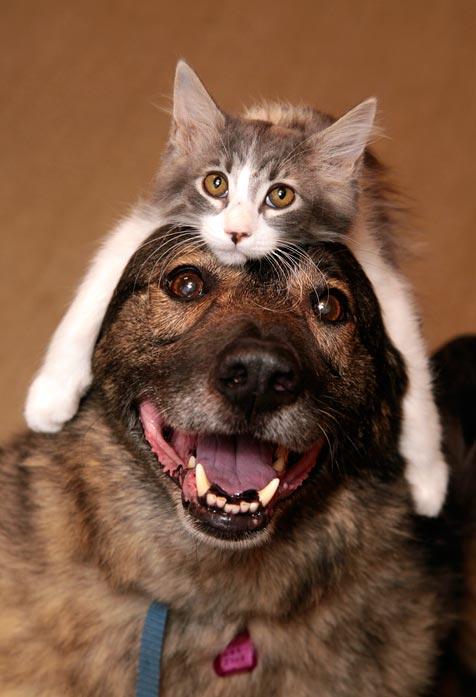 Woman with Alzheimer's cheered up by photo of dog and cat

A Best Friends "thank you" note, with a dog and cat pictured on the front, has prompted an elderly woman suffering from Alzheimer’s disease to smile, laugh, and reminisce about her pets for the first time in years.

Cheering up a woman with Alzheimer's

Moments like that had all but disappeared -- that is, until the card with Jeffrey the dog and Dido the cat arrived. "When she received your card with this adorable puppy/kitty combo, she fell in love," says her daughter, Judy Lee.

Now, when 87-year-old Sarah Harrell looks at the card with the photo of a "happy, smiling puppy face and tiny kitten draped over its head, she becomes happy, animated, alert and close to being our old Mom again," Judy says. "Because she so loves the photo, I have it in a frame, and she now keeps it on the table near where she spends much of her day."

Sarah, who lives on the East Coast, was born and raised on a farm surrounded by animals. Some of her happiest memories -- and her late husband’s too -- were of time spent with the family’s pets. And one of her first pets, as a child, was a small duck named Dewey, and during her marriage, a dog named Wendy. Now, she shares those memories of animals like Dewey and Wendy with her daughters.

Still, it was a surprise when the photo of Dido perched atop Jeffrey’s head brought a smile to Sarah’s face. Then, to the delight of her daughters, Judy and Linda Gerecitano, Sarah began to speak.

The card, Judy says, has jogged her memory.

The family has lived with her Alzheimer’s for a long time, feeling as if their mother was slipping away. But today, Judy says, "There is something about this photograph that makes her instantly smile, laugh and often begin to talk about some of the pets she had over the years."

Sarah’s reaction to the photo came as a pleasant surprise to another Sarah. As a Best Friends photographer, Sarah Ause, who shot the photo of Dido and Jeffrey, strives to create images that make an impact. "But helping to restore someone’s memory is really beyond anything I could have ever imagined," she says. "I’m in awe, completely inspired and honored to know that such a small occurrence in my daily life could end up having such a significant effect on someone’s life."

It is a photo that keeps on giving. "It is extremely difficult to accurately explain how this simple little photo seems to work a miracle time and time again," Judy says. "It is even more difficult to express how much it means to my sister and me. This picture is doing more to ward off the ravages of this horrible disease than any pills."

So, Aileen Walden, senior manager of Best Friends’ Donor Relations and Stewardship who first received a note about the card from Judy, had the photo enlarged, matted and sent to Sarah for her room. That too, brought a big smile to Sarah’s face. "Mom," her daughter Judy says, "must have laughed for several minutes when she saw it."

Adopt a pet from Best Friends.