37 dogs from a hoarding case find refuge with Best Friends in L.A.

Image
L.A. Animal Services, Angel City Pit Bulls, and Best Friends collaborate to save 37 hoarding case dogs who were very shy and had fleas and ticks.
By Kelli Harmon

They’re scruffy and sweet and small and have the best names — Mae West, Belle Starr, Al Capone. When dozens of little dogs arrived at a Los Angeles Animal Services shelter, they had no idea what was happening to them. They had just been removed from a hoarding situation (the only life they’d ever known) with far too many dogs for one person to care for, and even more fleas and ticks. 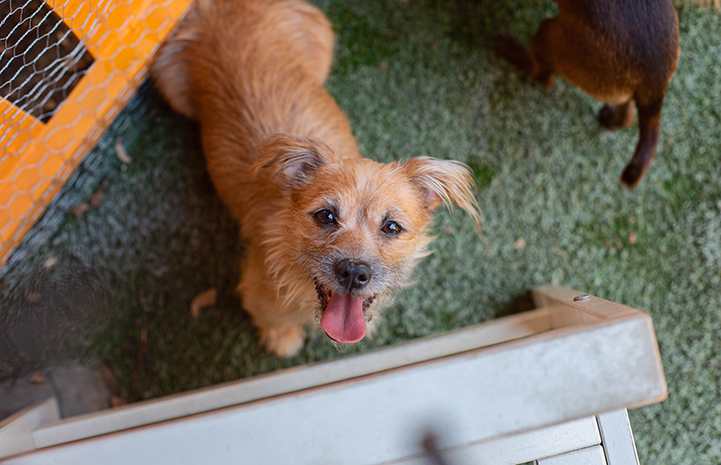 They’d been helped out of one bad situation, but their arrival at the shelter posed another problem. It was already overflowing with dogs. All the city’s animal shelters had every kennel occupied, and dogs living in temporary cages lined up in the hallways. There already had been two other hoarding cases earlier that week, which pushed shelters to the limit. So, nearly 50 dogs from yet another hoarding case — as sweet and scruffy as they were — pushed the shelter over the limit. If people didn’t step up fast to help the shelter, dogs would be killed to make space new arrivals.

Help did come. A combination of quick thinking, the shelter’s plea for help and a community effort brought people together to help. That spirit of collaboration is the cornerstone to the No-Kill Los Angeles (NKLA) initiative, which is making a lifesaving difference for pets in L.A. 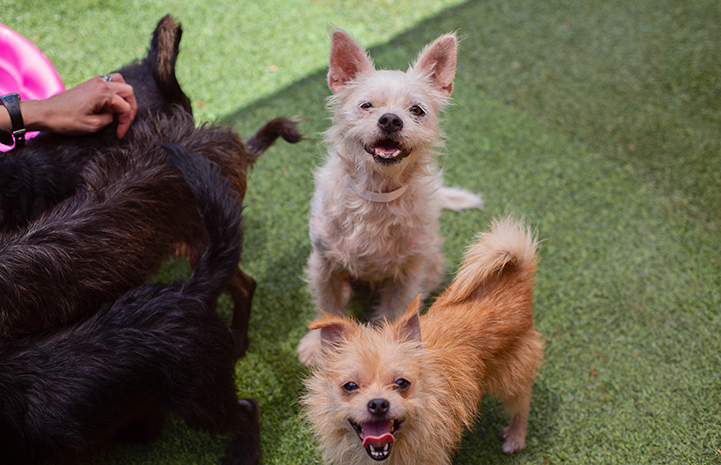 When L.A. Animal Services first contacted Best Friends, their contact was Alyss Tsukayama, shelter relations and admissions manager. “When we go in to help shelters, we start by asking them what they need,” says Alyss. “Little dogs aren’t typically the ones needing help in L.A. because they get adopted more quickly than big dogs. But because the shelter was so full already, they asked us how many of the dogs we could take from this case.” The answer turned out to be almost all of them.

“I was so proud of the team,” says Jennifer Pimentel, senior manager of operations for Best Friends in Los Angeles. “Even though the dog staff is strapped right now, they said to bring them in and they’d figure it out.” The city shelter staff chose 37 dogs to go to Best Friends and quickly got them ready to move. 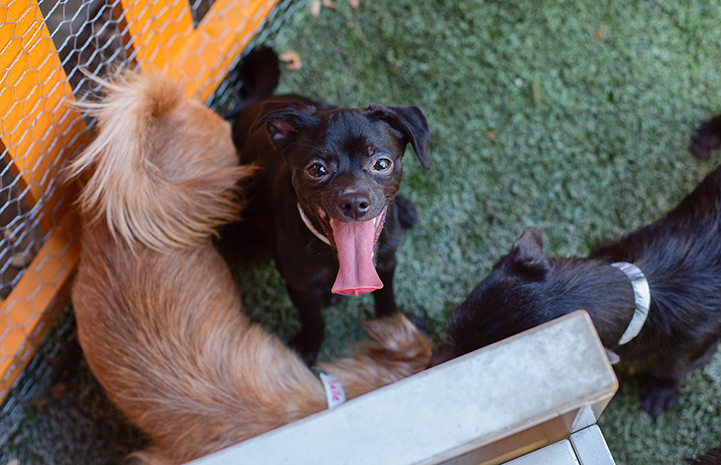 Meanwhile, another NKLA partner — Angel City Pit Bulls — also stepped up to help by not only taking in dogs to open much-needed shelter space, but also by loaning its transport van. But rather than being loaded up with pit bulls, the van would be taking little scruffy dogs over to Best Friends. 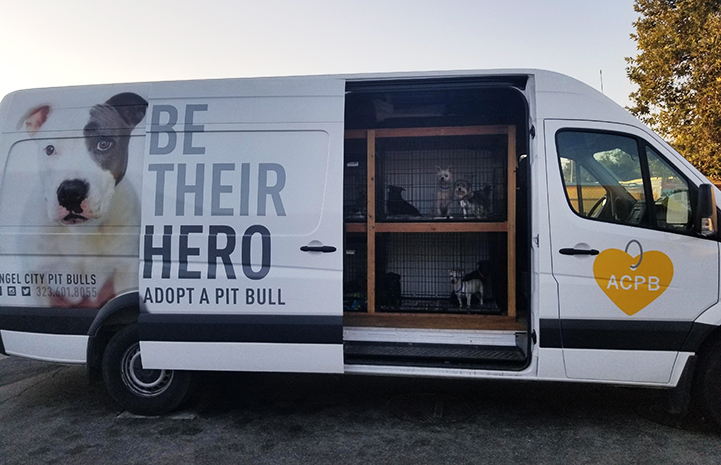 Everyone pulled together for the dogs, which immediately took pressure off the city shelter. Once they arrived at Best Friends, a whole lot of work would be necessary to get them ready for the next phase of their lives, and it would take a team of staff and volunteers working double time to get it done. But the reward was so worth it.

How to help dogs rescued from hoarding cases

Dogs from overcrowded situations are often shy because of little contact with people; plus, they have medical challenges due to neglect. These dogs were no different. “None of them knew anything about how to walk on a leash,” says Alyss. “Even though they’re shy, they’re not terrified and they were easy to just pick up.”

Staff and volunteers went slow and reassured the dogs that life was going to be a whole lot better. “We gave them fun names,” says Alyss. There’s Lenny and Squiggy from Laverne and Shirley, a group named for characters from Stranger Things, as well as dogs named for film stars, wild west outlaws and gangsters. 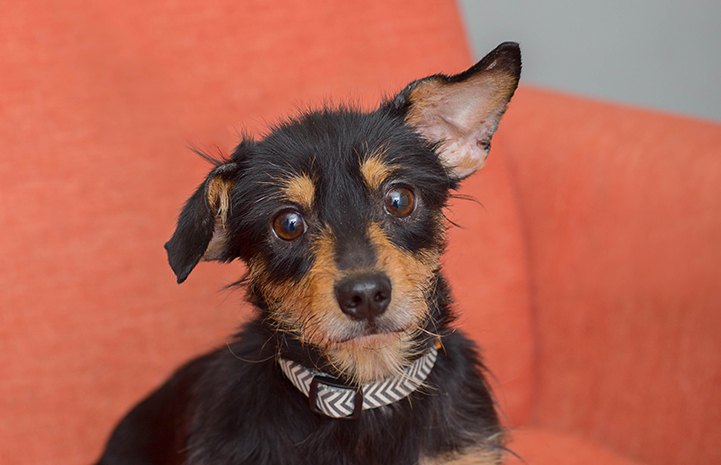 With new names and bright futures, it was time to get the dogs feeling better. Luckily, most of their medical problems were treatable with veterinary care and elbow grease. Dr. Nicole Petschauer, senior veterinarian for Best Friends, got to work with her team right away by examining each dog and attending to immediate needs. One little senior dog named Al Capone had a mouth full of infected teeth. That is, he did until he met Dr. P., who gave him a dental cleaning and removed some rotten teeth. 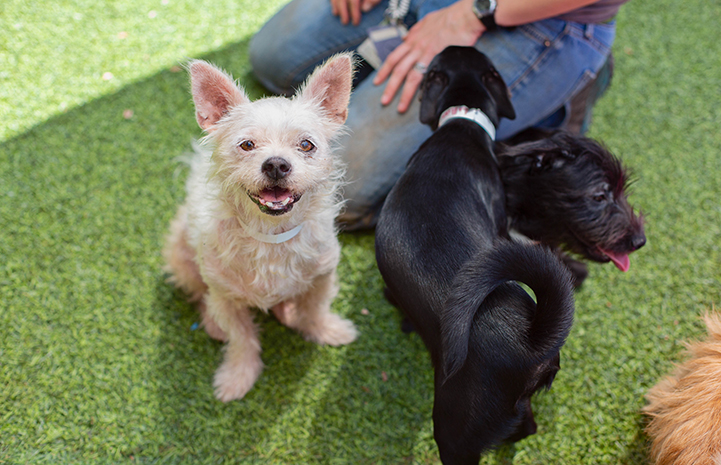 The vet team would be extra busy for the next several days, spaying and neutering the dogs so they could be placed up for adoption. But even before that could start, they had to address the fact that all the dogs were infested with fleas and ticks.

Flea and tick treatment for dogs

It’s quite a project to clean up 37 dogs all at once, so staff called on volunteers to come to the center to help. A small army arrived the next morning and volunteers gave the dogs baths, painstakingly combing fleas and picking ticks out of the dogs’ hair. It took hours, but seeing the dogs feel so much better once they were clean and free of parasites was worth every minute. 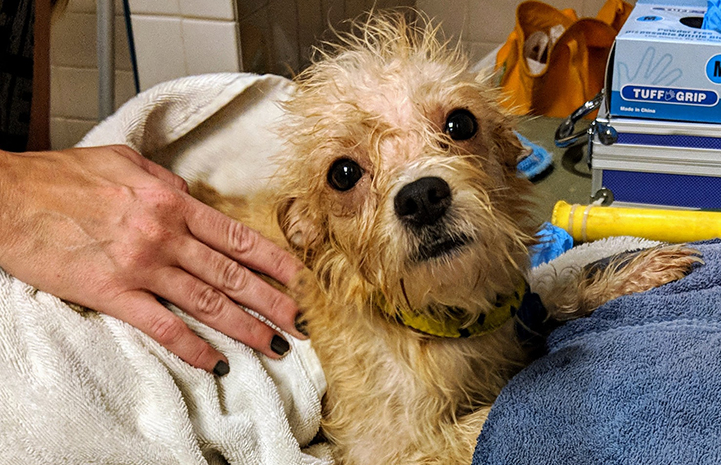 The dogs loved snuggling in clean towels, being cuddled by volunteers and getting all those itchy bugs off them. Soon they were in line for spay/neuter surgeries, which would get them one step closer to new homes and finally putting a difficult past behind them. The day after his dental cleaning, Al Capone was already feeling much spunkier and was visibly relieved that his mouth didn’t hurt all the time.

How to help dogs where you live 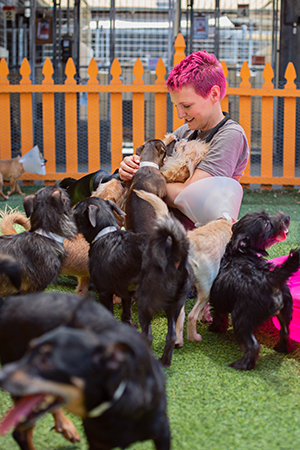 Seeing the dogs go from scared and parasite-infested to smiling, clean, playful and safe was the ultimate reward. As predicted, it didn’t take long for people to fall in love with the dogs, and many have already been adopted.

The city shelter has responded to the influx of animals this summer with low-cost adoptions, making the public aware of the situation, encouraging the community to spay or neuter their pets, and to come out and adopt.

“L.A. Animal services was fantastic,” says Jennifer. “Everyone worked together, and that saved lives. “The shelter is there to serve the community, so when the shelter fills up, it’s the entire community’s responsibility to help.”

Now 37 adorable, scruffy little dogs in L.A. are either already happy in their new homes or well on their way there. It’s just one example of how together, we can Save Them All — especially if someone (living in L.A. or somewhere else) reads about a situation and steps up to foster, volunteer or adopt from a shelter. It’s really that simple.

Be a lifesaver. Donate to help pets in need. 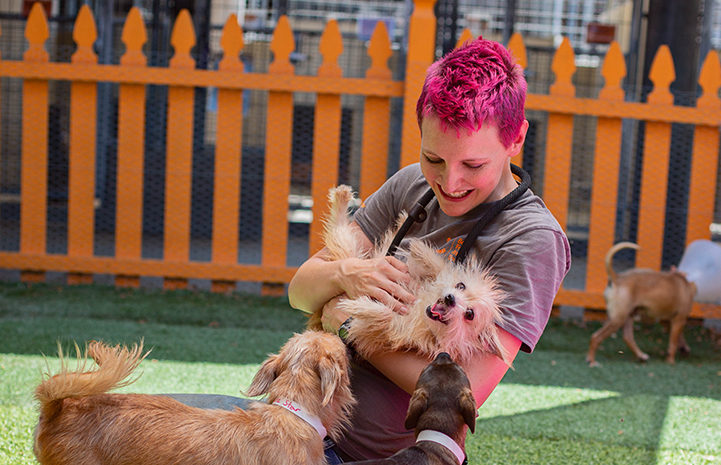