Image
Abandoned senior dog with arthritis and mammary cancer is rescued and then adopted, and she's now feeling better and enjoying life to the fullest.
By Nicole Hamilton

When Anna Raines first saw Sequin, the dog looked so frail and resigned that Anna wasn’t even sure she was breathing.

An animal control officer for LifeLine Animal Project, a Best Friends Network partner that operates Fulton County Animal Services, Anna had received a call that day from a concerned neighbor who saw Sequin in a yard ― apparently abandoned. When Anna arrived on the scene, she searched for a long time through the wooded lot and was about to give up when she spotted Sequin curled up in a ball under a tree.

Anna knelt beside the big gray dog, who lifted her head with the little energy she had. She looked like an older dog, and when she tried to stand up, she had a hard time.

Anna picked up the large dog, carried her to the truck and brought her to the Fulton County shelter. She was hoping (as with all the animals she’s rescued) that this was the beginning of a better life for Sequin, and that one day soon, she’d find a family to help her put the days of abandonment behind her. 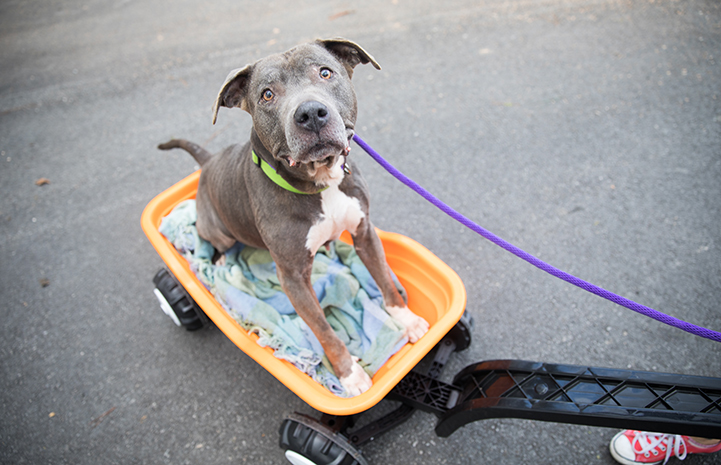 Getting Sequin to the shelter was a first step in getting her to safety, but a busy county shelter can be an overwhelming experience for senior animals with health challenges. She needed a place where she could have all the time she needed to get her medical issues attended to, and to one day get adopted. Best Friends in Atlanta partners with the Fulton County shelter, in part to help animals needing extra time and care, just like Sequin.

Soon, the big gray dog was on her way to the Best Friends Pet Adoption Center in Atlanta. There, she quickly won the hearts of the center’s staff and volunteers with her sweet and gentle personality.

To keep her comfortable, they lined her kennel with nonslip padding and fed her three to four times a day to help her gain weight.

One day while giving Sequin her daily dose of belly rubs, the staff noticed a lump. A medical examination revealed she had mammary cancer. And although she had surgery to remove the mass, it was likely that the cancer would return.

The news only made the center staff work even harder to make sure Sequin’s future sparkled.

They bought her a wagon for walks so she could give her achy arthritic joints a rest, and they created a bucket list full of fun things for Sequin to do. And she quickly checked off a couple of those items ― going to Starbucks for a treat and sitting in the garden of a volunteer while she worked outside.

Soon, Sequin was feeling and looking much better than the day she arrived. Despite cancer and arthritis, she thrived on all the love and care she received from everyone she met. “She started to put on weight,” says Kathleen Delaney, the center’s intake coordinator. “I think she thought she was young again.”

There was no reason Sequin couldn’t be adopted. But the right home would be with someone who could understand her medical challenges, keep her comfortable and accept that she’s a senior with not that many years ahead. While Sequin was feeling better than she had in a long while, staff and volunteers held out hope that the right person would step forward and take her home for good. 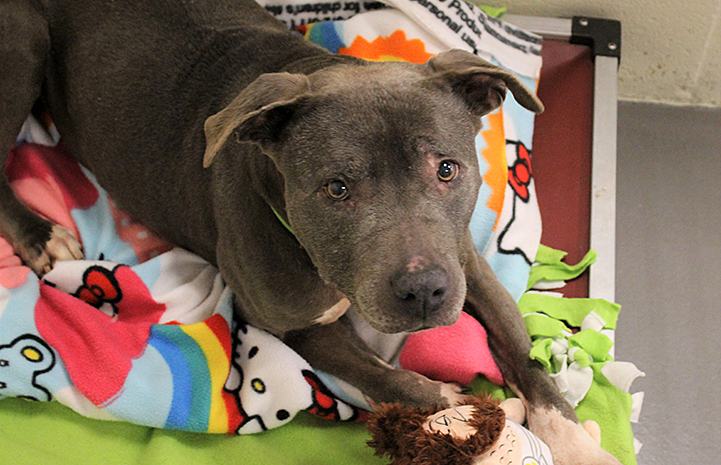 It was looking like another day had gone by without Sequin finding a home, but that all changed when April Higdon walked in the door.

While driving home from work, on a whim April turned into the adoption center parking lot. Her father had instilled in her a love for animals with special needs, and she was thinking it was time to adopt and keep the tradition going.

“My dad always adopted the dogs that no one else would,” says April. “It kind of rubbed off on me.”

April asked to meet dogs needing a home the most, and Sequin was at the top of the list. When April saw her for the first time, she sat down on the floor and Sequin walked up and climbed right into her lap. There were a few tears (of joy, of course), because it was crystal clear in that very moment that Sequin had found a home.

A dog’s lesson: the slower you go, the more beauty you’ll see 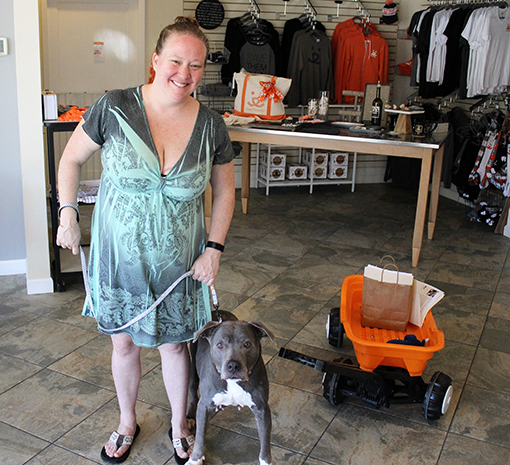 April wasn’t intimidated at all by Sequin’s cancer diagnosis. It just meant that every moment with her would be a bit more precious. She wasted no time taking Sequin on a shopping spree at the pet supply store. In fact, that’s the first place they went after April signed on the dotted line and made the adoption official.

For the first couple of days in her new home, all Sequin wanted to do was sleep in her bed. Then, when she was all rested, she was ready to play and snuggle with her new mom. Sometimes she even gets to go to work with April.

One of their favorite things to do together is take leisurely walks around the neighborhood ― a first for April. “Sequin can’t walk fast,” she says. “She’s helped me slow down and not be in such a hurry.”

The walks have helped April meet new friends who want to learn more about Sequin, and April has found herself spending more time taking in the beauty around her. The world is beautiful these days for Sequin, too. She’s put those days of being alone in the woods behind her, just like her rescuer hoped that day when she first saw her.

“She is so friendly and loving,” says April. “I can’t imagine my life without her now.” 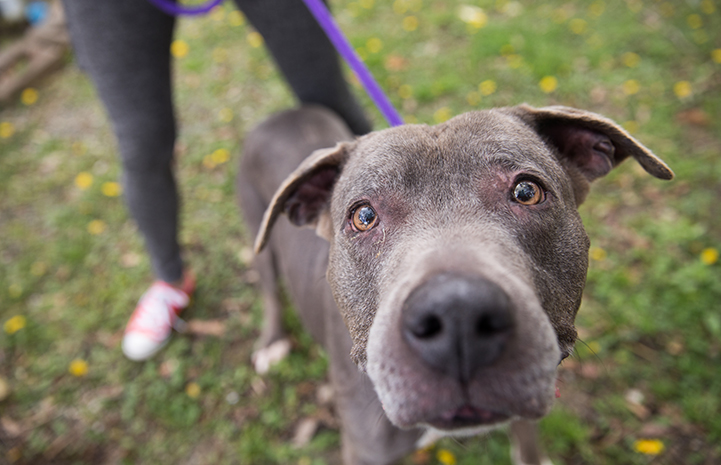