Bernardo, a scruffy black-and-white terrier mix, had been at Best Friends’ NKLA Pet Adoption Center for a few weeks, learning bit by bit that people are good. Adopters aren’t always drawn to dogs who hide from them, so staff and volunteers kept working with Bernardo to help him gain confidence. Candi Crawford, NKLA manager, thought, “His day will come.” Indeed it would, and for hundreds more adoptable pets just like him because of “The One,” a Best Friends Valentine’s promotion that encouraged people to head to the shelter to find true love.

“The One” pet adoption promotion and then some 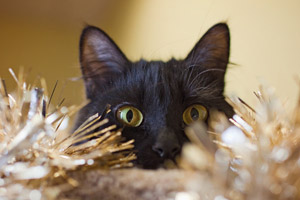 For three days over Valentine’s Day weekend, Best Friends pets could be adopted for just $14, including those at Best Friends’ pet adoption centers in Los Angeles, Salt Lake City, and the Sanctuary in Kanab, Utah. The promotion was extended to No More Homeless Pets Network partners, a Best Friends program that helps rescue organizations and municipal shelters that share one goal: to end the killing of dogs and cats in shelters.

The 100-plus partners who took part in the promotion received marketing materials and plug-and-play advertisements. In the days leading up to the big weekend, people across the country placed ads, decorated shelters and readied pets, making sure they looked their best — all in hopes that someone would come and fall in love.

By the time Lafayette Animal Control Center in Louisiana opened their doors on Valentine’s Day, people were waiting to adopt. Pets went home quickly, and as the day went on, the number dwindled down to almost zero adoptable pets. By the end of the day, just two large black dogs remained. Shortly before the shelter closed, a couple walked in and asked if there were any dogs left for adoption. They ended up adopting both remaining dogs. Patty Meehan of Friends of Lafayette Animal Shelter says, “This event brought the community to the shelter like never before. We couldn’t be happier.”

Swiss came to the Best Friends Pet Adoption Center in Mission Hills, Los Angeles, when he was just a kitten. He did get adopted — twice. But he was returned each time because he’s prone to urinary tract blockages, which are emergencies when they happen, and require surgery to alleviate each time. Janette Nevils, cat caregiver team lead, says, “We welcomed Swiss back each time, but we wanted him to have his own family.”

During “The One” promotion, Swiss took matters into his own paws and reached out and grabbed his new mom by the shirt. “I explained his condition to his new adopter in great detail, and let her know she needs to be ready to possibly take Swiss in for surgery,” says Janette. “The adopter immediately said, ‘I do.’” 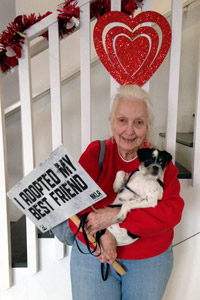 Bernardo the small dog is the one

Bonnie Whitaker went to the NKLA Adoption Center in Los Angeles on February 14th with a cutout newspaper ad for “The One” because she was ready to add more love to her life. Her 16-year-old Yorkshire terrier had recently passed away. When she met Bernardo, she was taken with the little dog’s adorable, scruffy face and the way he followed her around the room. Candi says, “It was the first time he sought out attention. This match was just meant to be.”

Bernardo, and many other lucky pets like him, got to spend that night in his new home instead of a kennel, and he could sleep soundly knowing that, out of all the pets his new family could have chosen, he was “The One.”

Get involved to save pets

Promotions like “The One” are just one way that, together, we can Save Them All. Learn what you can do to help save homeless pets.