Image
Baby black-chinned hummingbird falls out of nest and loses her parents. She is helped at Best Friends Animal Sanctuary.
By Sharon St. Joan 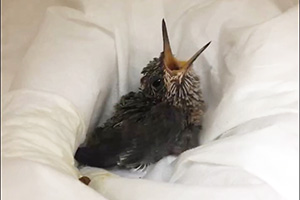 The tiny nestling hummingbird arrived at Best Friends Animal Sanctuary at the height of summer. She had fallen out of her nest and was found on the ground by a kind person, who searched for the nest in nearby trees but couldn’t find it.

Despite this startling event to her young life, the baby hummingbird was uninjured and had no breathing problems. Staff at Wild Friends, the state- and federally-licensed wildlife rehabilitation center at the Sanctuary, took her in and began feeding her every 30 minutes.

Black-chinned hummingbirds (only the males have black chins) are native to southern Utah, where Best Friends Animal Sanctuary is located. They weigh an average of 2.9 grams, and they generally live from three to five years, but can live as long as 12 years.

Early in the fall, black-chinned hummingbirds fly to Mexico for the winter; however, the plan for this little hummingbird was top-notch care at the Sanctuary and, eventually, release back to the wild in nearby St. George, Utah, where a nonmigratory population stays year-round. That was the safest decision, because it was relatively late in the year and Mexico would be too long a flight for a just-released bird. 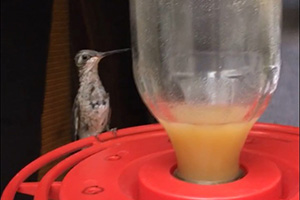 Caregivers at Wild Friends made a little feeder for the tiny baby out of a syringe and painted around the syringe’s open end with fingernail polish to help her find her food easily. But because the hummingbird was so used to being fed by her parents, she would “gape” (open her mouth to feed, just as baby songbirds do), and the gaping caused her to turn her face away from the syringe and wait to be fed. But eventually, she got the idea and began to self-feed at the syringe.

Her diet was a combination of two food sources. A mixture of sugar and water works really well for outside hummingbird feeders. But nestling hummingbirds in the wild also get their diet supplemented with tiny insects (such as gnats) caught by the mother.

A note about feeding hummingbirds: If you begin putting out feeders, please be aware that you’ll need to continue doing that because the birds become dependent on them. The feeders will need to stay filled all the time, because hummingbirds eat often (around every 15 minutes). Best practice is to never use commercially bought food containing red dye. You can make your own food or buy hummingbird food without red dye. And remember, feeders should be cleaned well every day or two.

Released back to the wild

As the tiny bird grew up, caregivers began putting flowers so she could start feeding off them. She especially liked tall yellow plants called bee balm.

Wild Friends has rehabilitated and released several hummingbirds this year, and soon this latest little one was good to go. Once she was nearly full-grown and eating well on her own, caregivers drove her to that ideal spot for release.

She can expect to have a happy life, filled with sunlit days, lots of flowers and good times — zipping through the air and playing with her friends. 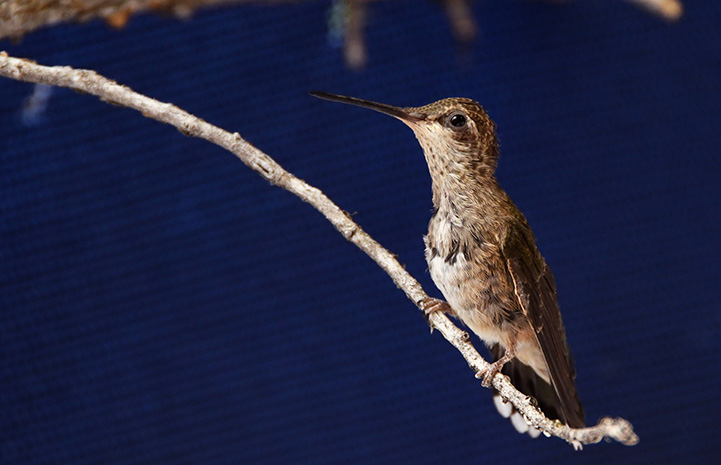