Image
With Best Friends' help, bulldog in need finds his perfect person and is adopted.
By  Denise LeBeau 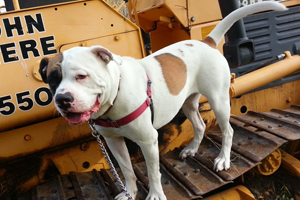 Bluto, a brown and white American bulldog, complete with a “Petey patch” over his right eye, is as handsome as he is sweet. The burly fellow wound up in a Montana animal shelter where the bustling environment was taking a very bad toll on him. While the shelter’s behavior experts worked with him every day, it became clear that he needed more training and a special home to bring out the best in him. Because Bluto could be reactive when he was scared, that, in turn, scared off potential adopters. Luckily that home was closer than anyone expected.

While Bluto’s issues weren’t insurmountable, they would require careful handling, and it wasn’t likely that a home would become available through the usual avenues. Bluto wouldn’t be able to attend adoption events or walk around busy areas with an “adopt me” vest on. But he had people on his side, and they asked for help.

The Feisty Fido Crew, a Helena, Montana, group of local animal trainers and advocates, had worked with Bluto since the beginning and were his constant champions. They were big fans of the loveable dog, who could become unsure of situations at times.

Networking to help Bluto the dog

Loren Skinner, one of the Feisty Fido Crew trainers, contacted Best Friends and connected with a No More Homeless Pets Network specialist. The Best Friends No More Homeless Pets Network is a group of rescue organizations and municipal shelters across the country all working to end the killing of animals in our nation’s shelters. One of the ways the Network helps save lives is by solving issues that prevent shelter pets from finding homes. That could include providing training information, having animals come and stay at Best Friends Animal Sanctuary, and just tapping into a larger network of people in the area where the animal needs help. Once Best Friends staff sent out a member message to people living within a 150 mile radius of Bluto’s location, the dog’s fate changed.

Moved by the message to adopt a dog 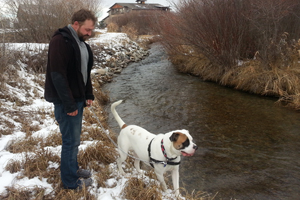 Silas Beck, who lives 98 miles away from Bluto, saw the message and was floored that a dog as handsome as Bluto still needed a home. “My mom had an American bulldog when I was growing up. I love these dogs,” says Silas. He was over the moon when he found out Bluto was still available. Bluto was going home at last.

Bluto, renamed Louis, is the apple of his father’s eye. Silas lives in the country on sprawling open acreage where the two enjoy mountain biking and romps in the river. “He’s so beautiful,” says Silas. “We go through commands every day and he’s so good about his food. He waits until I say he can eat.” Louis now loves to sprawl out to gleefully chew his rawhide and Silas can’t believe how loving he is.

And the big loveable dog is proof that sometimes the right home is just around the corner, if only pets can get a little help finding it.

Silas says, “I think he’s been given a reason to not trust. But he’s great with the people he knows, and he’ll never be put into another situation where people are anything but kind and gentle towards him.”

Sign up to receive member messages from Best Friends.