Best Friends has network partners in every single state, and all of them are saving lives daily. We never get tired of hearing their stories, and that’s why we want to share them with you, too. So today, we're proud to present one from Animal Ark Rescue, Inc. in Columbus, Georgia.

Sometimes two lost souls wander this earth searching for their other. Then sometimes Tinder, the online dating app, does exactly what it's supposed to do.

In this case, Tinder brought together a man from Virginia, who'd recently lost a beloved beagle, and a dog named Henry, who'd been in a shelter for three years. His wait for a home was over when a resourceful shelter employee decided to put him online to find love.

"Henry met his adopter because of his Tinder," says Miranda Morrison, the canine behavior and enrichment coordinator for Animal Ark Rescue in Columbus, Georgia. "I am always looking for new and creative ways to market long-stay animals." 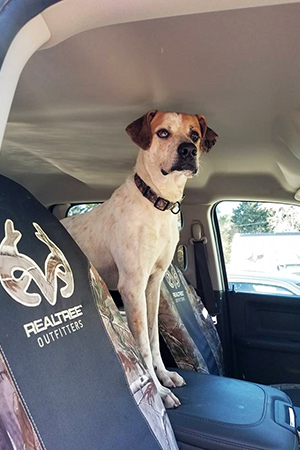 Henry is a great dog who loves car rides, snuggles and long walks in the woods. Miranda even called Henry her favorite dog in the shelter, and she was determined to find him his one-and-only before another year went by.

Figuring that Henry's ideal adopter would be young and active (and that young and active people are on Tinder), Miranda set up his profile on December 29. She advertised Henry as a nature enthusiast, lover of adventure and 23 years old. (Hey, in dog years, that's right.)

"I'd love to meet an active and outdoorsy new best friend to explore with," his profile said.

The matches poured in. And most of his 25 matches (from those who "swiped right" on his profile to indicate interest) seemed pleased to connect with an actual dog. That could be in part because Henry is so handsome, and because his opening lines were so charming and funny. "Hello hooooouuuuuman! My name is Henry, but you can call me 'Good Boy,'" and "Netflix and nuzzles?"

"Most people seemed pretty delighted," Miranda says. And so was the world at large. Henry's Tinder gambit went viral, appearing on the websites of The Today Show, ABC News, The Atlanta Journal Constitution, in dozens of other publications and on TV and radio.

"I found out about Henry on SiriusXM," says Alexander Ognibene, known as Bene by his friends. "I’m truly thankful for it."

Pledge your love to animals this month

Tinder dog-human match made in heaven

Bene is an avid outdoorsman who lives with his mother and two dogs in Northern Virginia — a long way from Animal Ark Rescue.

After he'd lost his senior beagle to cancer in August, Bene was drawn to what he heard about Henry — so much so, that the 26-year-old graduate student got right in his truck and drove to all the way the shelter for a face-to-face meeting. "I drove 11 hours for him," Bene says.

It was love at first sight, says Miranda, who witnessed their initial interaction. "As soon as Alexander walked in the door, I was old news. Henry was just so immediately taken with him," she says.

"Henry was definitely what I was looking for," Bene says. 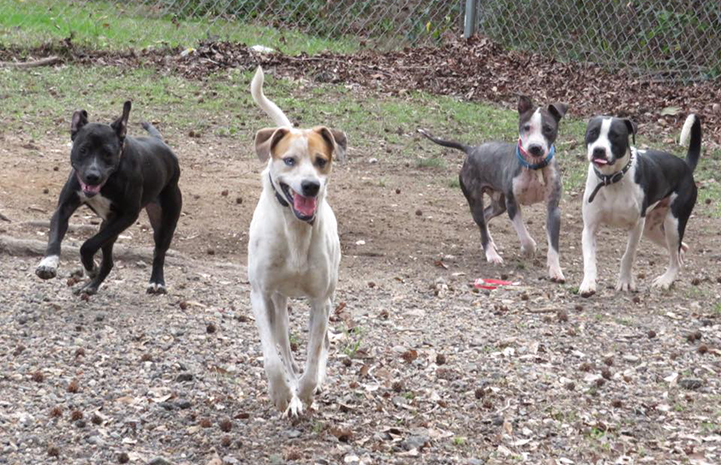 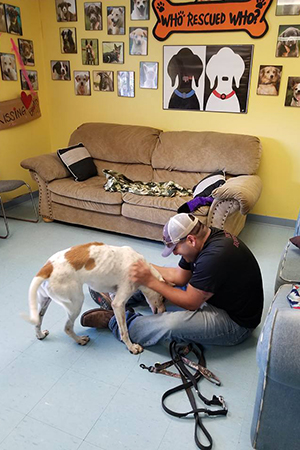 On January 15, and after three years in the shelter, Henry found the perfect home — thanks to Tinder. And now that he's been adopted, he’s just as wonderful as his Tinder profile promised he would be.

"He seems to be loving it at home," Bene says. "If it wasn’t for them posting Henry on Tinder, I would have never found him."

Miranda is buoyed by Henry's success on Tinder. She's planning to try it again soon for another of the shelter's long-time residents, as well as experiment with other innovative ways of matching her shelter's pets with adopters.

"Always be creative and break the rules. You never know if something works until you try," she says.

This love story is also a good reminder that there's someone out there for all of us, if you're open and looking in the right places.

"Hey, if Tinder works for Henry it can work for anyone," Miranda says. "Swipe right."