Being part of the Best Friends Network gives animal welfare groups across the country the tools they need to save more lives and the chance to work together to Save Them All.

Best Friends has network partners in every single state, and all of them are saving lives daily. We never get tired of hearing their stories, and that’s why we want to share them with you, too. So today, we're proud to present one from the LifeLine Animal Project in Atlanta, Georgia.

These dogs might not yet have been adopted, but they definitely are adored. And they've got the love letters to prove it.

It all started when Katie Corbett, volunteer and dog foster coordinator for LifeLine Animal Project, lay awake one night, mulling over how she could help some of LifeLine's dogs find their happily-ever-afters by Valentine's Day.

She came up with the sweet and brilliant idea of writing them love letters — letters in which the dogs' virtues would be detailed and their most admirable qualities highlighted and celebrated. "Our volunteers are amazing and love to help out with promoting our pets, so I knew they would jump on board with this idea and make it soar," Katie says. 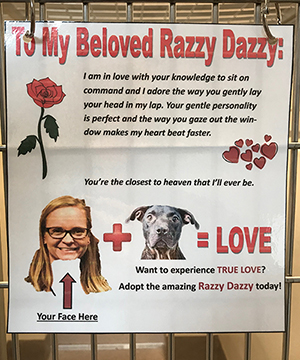 They did indeed. About three dozen love letters have been written so far and have been attached to the dogs' kennels. And they are as sweet as chocolates from a heart-shaped box.

"My beloved Razzy Dazzy," reads one. "I am in love with your knowledge to sit on command and I adore the way you gently lay your head in my lap. You're the closest to heaven that I'll ever be."

Here's another for the shelter's longest-term resident Darby: "Happy Darby. How do I love thee? Let me count the ways," the letter begins, before going on to enumerate those ways, which include Darby's "cute, chubby sausage body" and her "happy friendly nature."

Who could resist such a dog as described in these missives? Hopefully no one.

Adopt a pet this Valentine’s Day

The aim is partly just to celebrate the dogs, but it’s also to help them get adopted.

"Our shelter can be very big and overwhelming for a lot of visitors, so this was geared to draw some extra special attention to those dogs that have been here a long time or have been constantly overlooked," Katie says. "A lot of dogs act like nuts in the kennel and then are total angels when you get them out. And I want people to pay attention to those pets too."

It's already working. Just under two weeks ago, the first love letters went up at LifeLine Animal Project, and three of the dogs with letters on their kennels have already been adopted.

That includes Ivar, a dog who'd been at LifeLine since the summer. Katie describes Ivar as "such a doll." But even though staff and volunteers love him, the black pit-bull-terrier-type dog, who Katie says just didn’t really do anything to wow potential adopters inside the kennel, went a long time without being picked.

On February 4, Ivar's letter went up. In fact, he was the very first dog to get one. 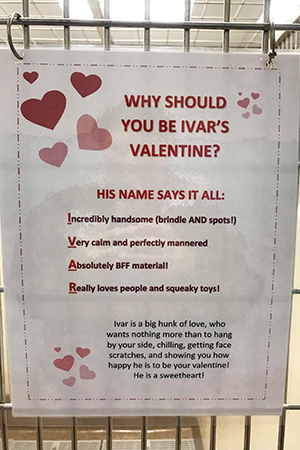 "The adopter saw the letter, and then asked for more information and to take him out," says Katie. "And he was adopted the same day." 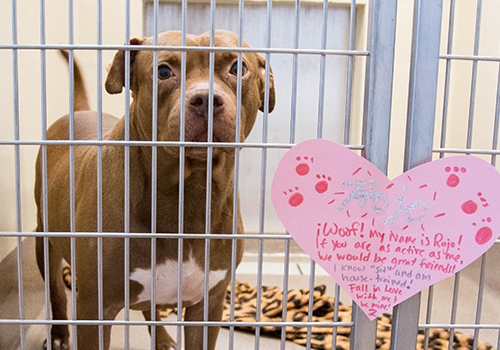