Image
Big shelter dog is transported from Houston to Salt Lake City, where he is being fostered and receiving heartworm treatment and training.
By Nicole Hamilton

Brodie is such a kind and loveable dog that his fan club extends all the way from his hometown of Houston, Texas, to Salt Lake City, Utah, the place he now calls home.

You’d think a personable guy like Brodie would have no trouble getting adopted after being brought in as a stray to the Harris County Animal Shelter in Houston. But Brodie was at a shelter that’s often filled to capacity — a situation that puts pets’ lives at risk. For Brodie, it came down to the way he looks.

“Large dogs, black dogs and mixed breed dogs with blocky heads are at the top of the list when space runs out,” says Jessica Roper, foster manager for Best Friends in Houston. “Unfortunately Brodie had all three of those things against him.”

While his physical characteristics may have worked against him at the shelter, a whole lot of people were on Brodie’s side, including one very determined shelter veterinarian and two equally determined foster families living nearly 1,500 miles apart. 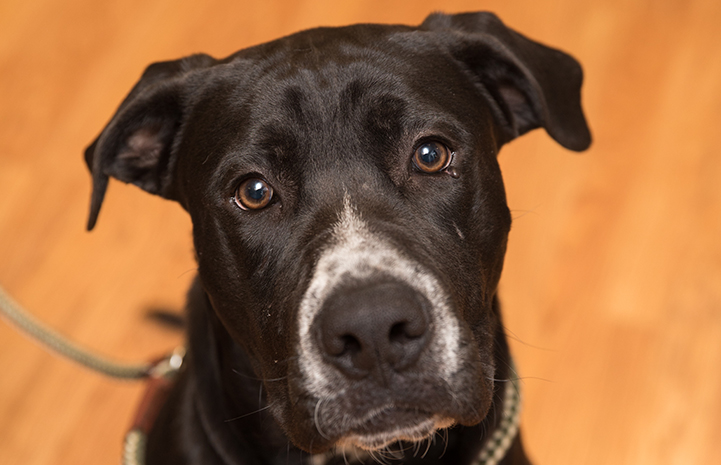 After having no luck at the shelter finding a home, Brodie was placed on what Jessica calls the “here-too-long list.” Unless someone stepped up to take Brodie within 24 hours, he would be in danger of being killed.

“One of the shelter vets saw what a sweet and loveable guy Brodie was and kept him off the list,” says Jessica. “I met him and immediately saw what she saw too — a big marshmallow hambone goofball. He has velvety soft fur and is a little bit of a spaz, but so loving and gentle.”

With no time to waste, Jessica reached out to foster volunteer Liz Evans. She knew Liz could handle a big active dog like Brodie, and Liz agreed to help. 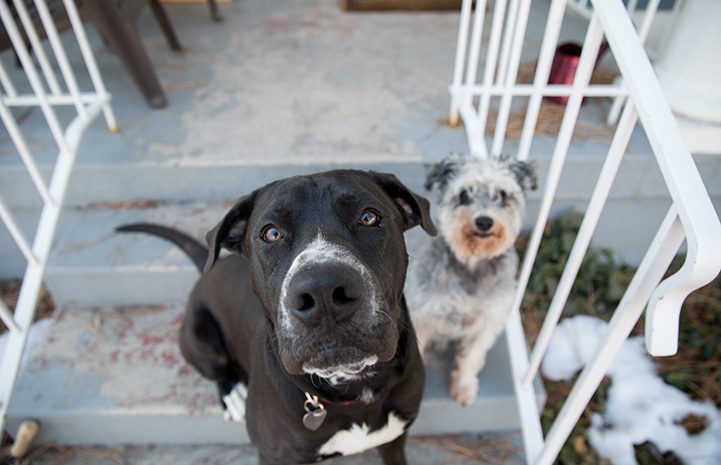 A dog needing structure and love

During Brodie’s first days at Liz’s place, he wasn’t in the mood to have fun. Life at the shelter had been stressful and he showed it. “At first he was scared and just beaten down,” says Liz. “He didn’t know what to do or how to act, and just watched me.”

Liz started crate training him right away. “He is a really big dog and very strong, so I had to give him a structured, no b.s. environment,” she says. “He also really needed a ton of love and reassurance, so I gave him that. He followed me literally everywhere all day long.”

The more Liz reassured Brodie that he was safe and secure in her home, the better he began to feel. After a little time and a lot of cuddles, Brodie began to let his guard down. He loved playing with toys, and even became great buds with Liz’s dog, Sammie. 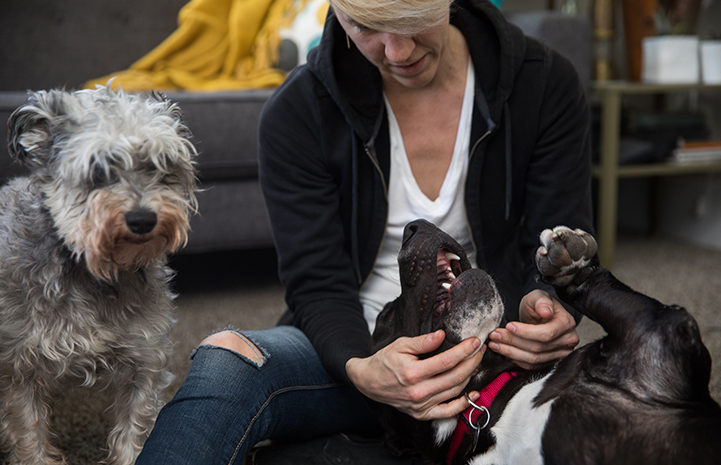 Brodie gets the trip of a lifetime

As Liz was helping Brodie settle into life in a foster home, Best Friends was busy organizing a transport from Houston to Best Friends in Utah. There was room for Brodie, and he’d soon be on his way to Salt Lake City.

Liz admits that at first it was tough for her to accept that Brodie would soon be headed far away. “It broke my heart,” she says. “But now it makes me happy to think of his antics and know that I helped give him a good life — one that he deserves”

Brodie made the journey from Houston to Salt Lake City without a hitch, and when he and his road trip buddies arrived, they were placed in foster homes. Brodie was paired with longtime foster volunteer Jess Vice.

It didn’t take long for Jess to see what everyone in Houston also saw in Brodie. “He wants to be touched all the time and told how good he is and given belly rubs,” she says. “He still has a lot of playful puppy curiosity: Firetrucks scare him, the dog across the street confuses him, and he loves shoes. But he knows he's not supposed to have them and goes belly up as soon as you catch him.”

10 more reasons to foster a pet 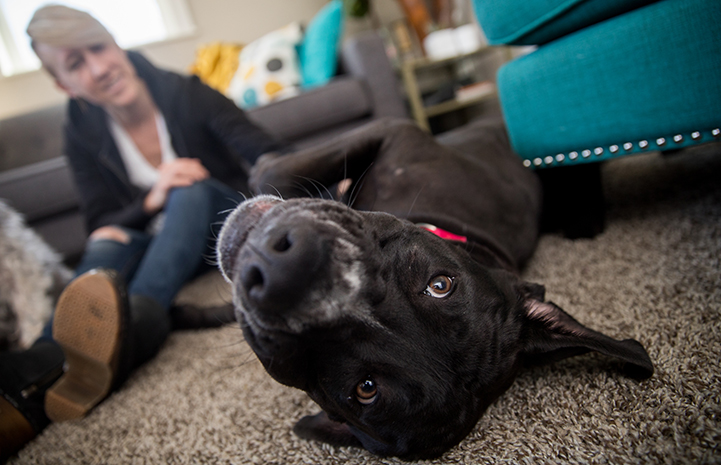 Next up for Brodie was to begin treatment for heartworm, a treatable but all-too-common condition in the southern states. Now Jess is helping Brodie (who she renamed J. Edgar Hoover) through the first part of his treatment. He has to stay as calm as possible during treatment, because as the worms die off, they can block blood vessels in a dog’s lungs and blood vessels. After 30 days, he’ll get a break for a month before beginning the second phase of treatment.

Jess is working on keeping a strict routine so there are no surprises. And she helps him stay calm by sitting on the floor with him, hugging and petting him.

“It didn't seem fair that such a good boy would have such a big hurdle in front of him. But the Best Friends staff has been incredible,” says Jess. “I'm so excited to see him at 100 percent and ready for a forever home.”

Heartworm disease in dogs and cats 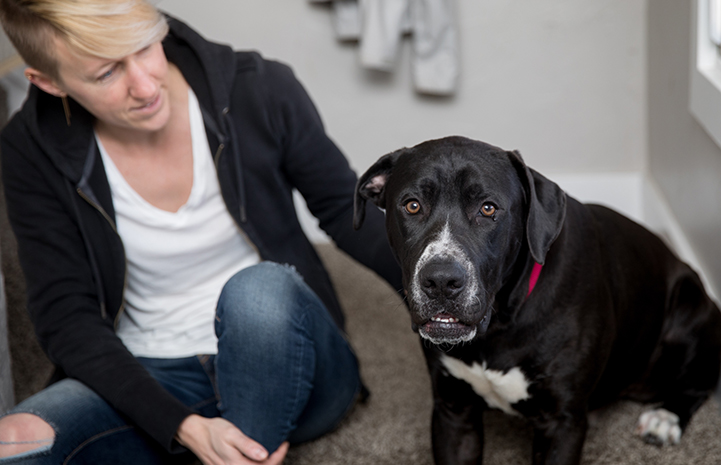 A dog having the time of his life

Jess definitely has Brodie figured out. “He is gentle and silly and very smart,” she says. “All he wants in life is for you to let him nap next to you or sit with your toes under his belly or touch him every time you walk by. It sounds funny, but I actually feel honored that I get to be his foster mom for a while.”

Back in Houston, Liz has been watching the Brodie videos posted by Jess, and that brings her joy. When she thinks of Brodie, she imagines him one day hiking in the mountains alongside his adopter, taking in the great outdoors.

Wherever Brodie’s journey takes him next, whether it’s to a mountain top or a comfy couch, you can bet he’ll be happy wherever he lands. “Our Brodie is having the time of his life,” says Liz. “He’s doing just fine.”

Save a life. Foster a dog near you. 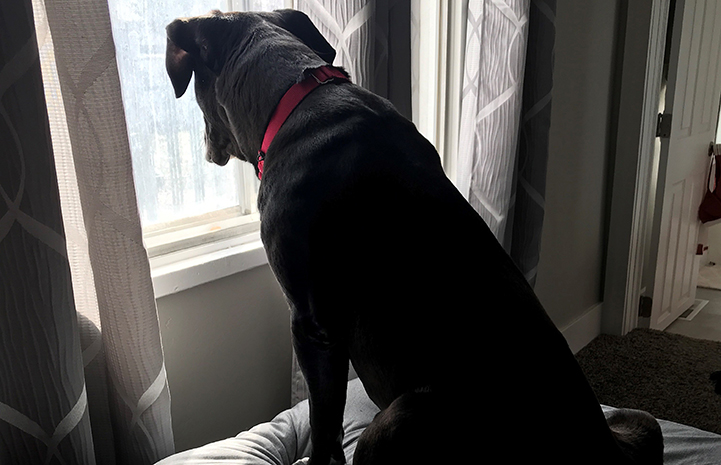 Best Friends in Houston is working collaboratively with city shelters, local animal welfare organizations and passionate individuals to save the lives of pets in shelters in Houston and the surrounding areas. To help Houston become a no-kill city for cats and dogs, Best Friends launched the Coalition to Save Houston’s Pets in April of 2018, followed by a community cat program, foster programs for dogs and cats, local adoption programs and an out of state transport program. Currently, Best Friends has full-time staff embedded at the Harris County Animal Shelter, one of Houston’s largest shelters. Together, we will Save Them All.

Photos by Sarah Ause Kichas and courtesy of Jess Vice