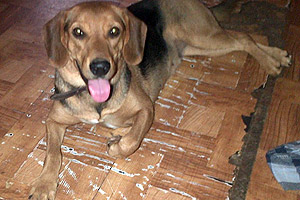 Lollie's luck vastly improved when a caring animal welfare organization answered the complaint call about an injured stray who needed to be picked up. Lollie was barely surviving. She had suffered a gunshot wound, broken pelvis, and multiple contusions when Faulkner County SPCA picked her up. To make matters worse, the 32-pound dog was also pregnant. Many public shelters don't have the resources to address such issues, but luckily for her, the caring folks in Conway, Arkansas, continuously go the extra mile to help animals. Lollie was no exception.

Faulkner County SPCA to the rescue

While Faulkner County SPCA pulled out all the stops to get Lollie healthy, the rural shelter had been facing some challenges of their own. Earlier this year, storms devastated their food storage shed, and they've been struggling to restock ever since. The rescue organization also works closely with the sheriff's department. The organization houses the animal-cruelty case victims - sometimes for years at a time. You see, animals being held as evidence are not permitted to be adopted out, so this can be a big strain on a shelter's resources. The sheriff's office employees, knowing that Faulkner County SPCA was doing all they could to help the animals in their charge, but were still struggling, had been buying pet food out of their own pockets.

"Shelters and rescue groups would give us what little they could to help," says Lydia H. Grier, director of the Faulkner County SPCA. "The volunteers brought food weekly. Our veterinarian donated food and medical services numerous times. We also were collecting scrap metal to keep us going. We really did not think we could keep going for very much longer without a miracle."

Having recently signed up to be a Best Friends' No More Homeless Pets Network partner, Faulkner County SPCA received a windfall of pet food when our supporter Blue Buffalo, a premium pet food company with a heart of gold, had tons of food they wanted to donate to help shelters and rescue groups in need. Michelle Logan, the No More Homeless Pets Network specialist who knew of the situation at the Faulkner County SPCA, reached out to Lydia, and with a bit of networking, 70,000 pounds of food were on their way to Conway. 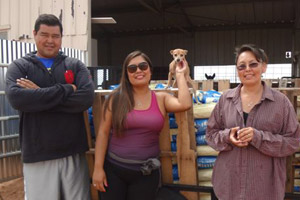 It was a joyous occasion in the community when the truck rolled up. Many folks came out to help unload the pallets and even offered safe storage space. This was in addition to the other multiple semi-tractor trailers full of pet food that were dispersed to our partners across the country. Over a dozen groups received the donation, and, in turn, are able to feed their pets-in-waiting and help those around them in need. Faulkner County SPCA did just that - they shared part of their donation with another shelter, which was able to immediately save 30 animals.

Saving countless lives in one fell swoop is something Blue Buffalo relishes. Director customer supply Caryn Cox shares: "With so many homeless pets, we know that rescue organizations are doing some of the most important work when it comes to the livelihood of pets in our country. Blue Buffalo is founded on the notion that we can increase the quality of pets' lives through healthy food, and we feel incredibly fortunate that we're able to give back to our furry friends that bring us so much joy."

Blue Buffalo's donation has enabled struggling shelters to turn the tide for their "Lollies." Lollie, by the way, has fully recovered and is just waiting on her forever home. Her puppies have all been adopted.

You can help out one of our No More Homeless Pets Network partners further their lifesaving abilities by donating, adopting and volunteering.

Search for a No More Homeless Pets Network partner near you

Photos courtesy of the Faulkner County SPCA and Robin Politowicz