Cat with FIV goes from homeless to the high life

Image
An FIV-positive cat from Best Friends is adopted and is now living the high life, literally, on the 19th floor of a high rise in Atlanta.
By Nicole Hamilton

Hobbes is a laid-back, friendly cat with soft orange fur and beautiful hazel eyes. With his good looks and go-with-the-flow disposition, he’s the kind of guy who would make a great companion to pretty much anyone. And yet, Hobbes waited a little longer than most of the other cats at the center to find love after being transferred on Valentine’s Day from the Cobb County Animal Shelter to the Best Friends Pet Adoption Center in Atlanta.

It’s tough to know exactly why it took several months for Hobbes to find a home, although the fact that he has the feline immunodeficiency virus (FIV) may have been part of the reason. Misperceptions persist about the condition, and that’s unfortunate, because cats like Hobbes can live a long life, just like cats who don’t have FIV.

Time went by and Hobbes remained at the center, but the staff knew the best was still yet to come for the copper-coated kitty. That they were sure of.

While Hobbes was going about his business napping, chasing toys and napping some more (chasing toys is hard work), David Tow was nearby, trying to muster up the energy to get through each day after his beloved 16-year-old dog, Cosmo, passed away unexpectedly in his arms.

“He was truly my best friend and I was inconsolable,” says David, who decided after a few days of missing Cosmo that he was in need of some animal therapy. “I visited several shelters in Atlanta, including Best Friends,” says David. “But I went home that night empty handed.”

David returned to the center a few days later for some more healing time with the animals, and this time he met Hobbes. “I love big cats, especially gingers,” says David. “He was very shy, so I just sat on a chair and played with a kitten that was also in the room. Out of nowhere, Hobbes jumped on my lap and just sat there.” 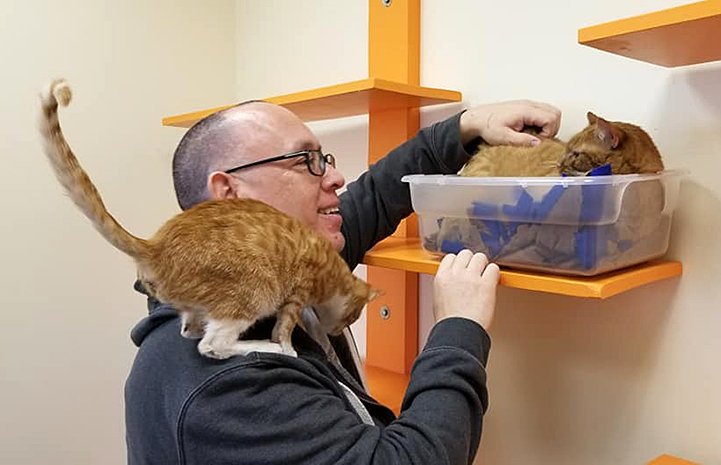 Again, David left the center empty-handed, but this time, he was also filled with hope. Spending time with Hobbes not only helped him feel better, but it also got him imagining

life with a pet again. But first, David had couple of things he needed to do — read up on FIV in cats and seriously consider bringing Hobbes home. 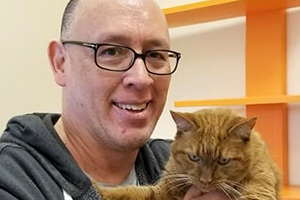 “After doing additional research at home it didn't seem like much of an issue,” says David about Hobbes having FIV. “What really bothered me was knowing he was probably in the shelter for eight months because of his FIV status.”

David returned the next day for his third visit. But this time when he saw Hobbes, he noticed the same look of defeat he saw in himself after Cosmo passed away. “I realized we needed each other,” says David, who upon leaving the center was no longer empty-handed, because Hobbes was with him.

More about FIV in cats

Today Hobbes is living the high life — literally. He and David live in a cool pad located on the 19th floor of a high rise in one of Atlanta’s most bustling, eclectic neighborhoods. And it suits Hobbes just fine. 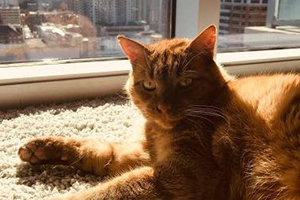 “He’s extremely affectionate,” says David. “From the first night he moved in, he seemed right at home. He's become more playful and is a great little companion.”

Most of the time you can find Hobbes looking out the window, checking out the scenes unfolding below. If he’s not at his favorite perch, he’s hanging out with David or playing with toys. “He likes string toys, but not rolling toys,” says David. (How great is it to find someone who just “gets” you?)

While Hobbes helped David cope with Cosmo’s passing, David admits that he briefly thought he might be selfish for adopting Hobbes to fill a void. But any worry of that was erased by how quickly the two have bonded.

There’s no doubt in David’s mind that Hobbes is happy, and sometimes when he watches Hobbes relax in window, he’s reminded that there are other cats like him who also deserve the chance to sit on top of the world. “Hobbes is handsome, special and extremely sweet, but he's not an isolated case,” says David. “Adopt an older pet or a pet with special needs.” You just might get to enjoy your own unexpected love story.

Donate to save more pets like Hobbes this holiday season