Come for Skechers, leave with a cat

Roommates Isabelle Li and Sarah Yehuda had been considering adopting a cat for a few months, but on one recent Saturday in September, they decided to make it official. So, they headed on over to DSW Designer Shoe Warehouse to find their new cat.

Now, Isabelle and Sarah are two savvy students living in New York City. They know perfectly well that DSW is where you go for a pair of orange Skechers ― not an orange tabby. But that Saturday was different, because Best Friends teamed up with BOBS from Skechers for the Cats and Kicks cat adoption event, hosted at DSW on Broadway.

It turns out that a lot of their neighbors felt the same way. The adoption event was busy from open to close. In fact, 32 cats and kittens ― all originally from Animal Care Centers of NYC ― found forever homes that day.

BOBS from Skechers and DSW step up to help cats

Elizabeth Jensen, executive director of Best Friends–New York, says that finding homes for more than 30 cats that day wouldn’t have been possible without BOBS from Skechers and DSW. “They really stepped up for us in a big way,” says Elizabeth. “And their support was a big reason why so many lives were saved that day.”

“It’s not only exciting, but also very rewarding to see the success of our joint adoption event in New York,” says Jolene Abbott, executive director of public relations at Skechers. “This was our first cat-only adoption event together, and the response was incredible. We could not be happier knowing that so many kittens and cats found their forever home today.” 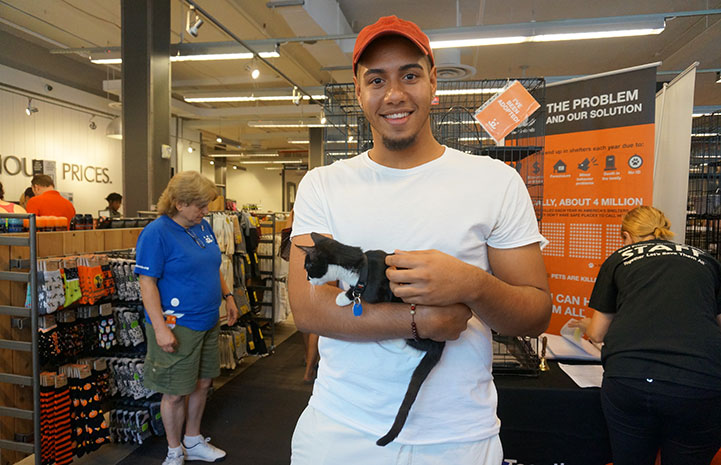 Isabelle and Sarah came to the Cats and Kicks event fairly certain that they would leave with an adult cat. But kittens have a way of changing people’s minds.

When the two students saw these two brothers, Audi and Bentley, playing together with abandon, they decided that if they adopted them both, the kittens could keep one another company while the roommates were away at school and work. That day, Isabelle and Sarah became cat adopters for the very first time, and Audi and Bentley found their forever home.

Today Audi (renamed Almond) and Bentley are enjoying their new home. “They are doing great, and we love them,” says Sarah. “We made a good decision.” And just as expected, the kittens are having a blast, both when their new human family members are home and when they’re away.

“Best Friends set out with a goal for the summer to save as many homeless cats in New York as we could,” says Elizabeth. “And with 32 adoptions in just four hours that day, we are ending the summer on a high note. Events like this are a lot of fun, but they’re also getting us closer to our goal: to Save Them All.” 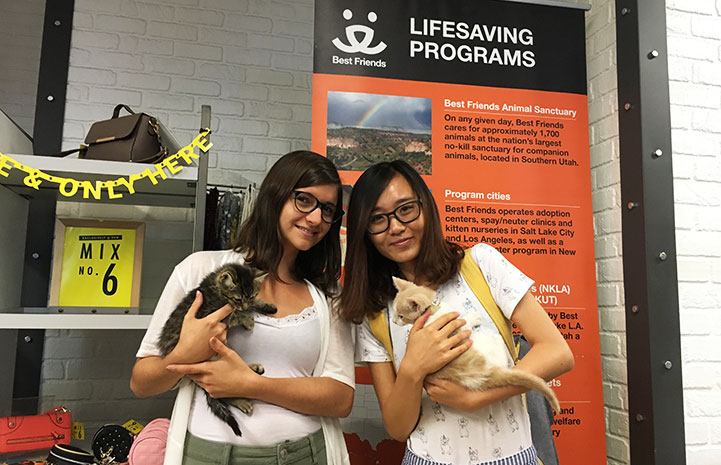