Image
Arriving at the Sanctuary with an injured jaw and a gunshot wound, Togo was skittish around people until he finally warmed up with the help of some canine companions.
By Sarah Thornton

Running around with his doggy friends, Togo is as happy and energetic as can be ― charging, chasing and play-wrestling with them through a flurry of wagging tails and a cloud of dust kicking up from behind. He is in his element. And though he’s a little less confident with people, he’s trying his best by following his friends’ lead. He’s already a long way from the scared, injured dog who first arrived at Best Friends Animal Sanctuary.

Living outside in Arizona, Togo occasionally accepted food from kind local residents before disappearing once again to wherever it was he spent his days. But when someone noticed that the stray husky mix was injured, Tuba City Humane Society, a Best Friends Network partner organization, stepped in to help. Togo was skittish and it took extra hands to catch him and bring him inside. He seriously needed veterinary care for a gunshot wound and a fractured jaw.

A veterinarian was able to wire Togo’s jaw into place, but he would need a couple months to recover and undergo additional surgeries to get everything back in working order. To give him the time and care he needed, Togo was brought to Best Friends Animal Sanctuary, where the veterinary staff set up a quiet room at the clinic and made sure he had plenty of soft, easy-to-eat food, plus warm blankets to snuggle in. 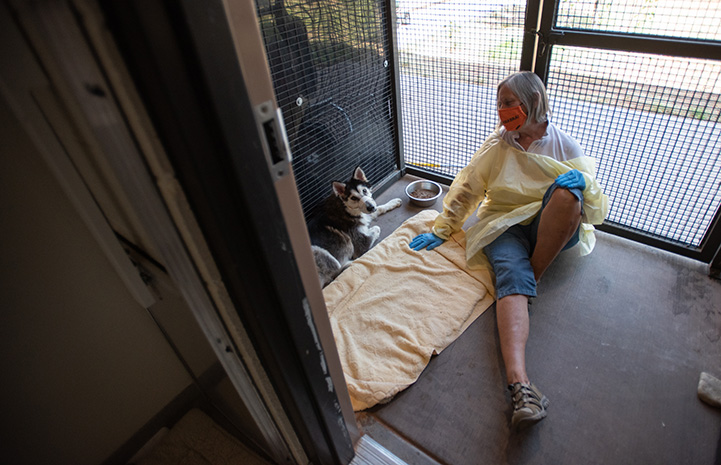 Shy and unsure of people, Togo spent most of his time in an enclosed patio watching the outside world. Staff and visitors would often sit with him, let him get used to their presence and receive the occasional hand-sniff in return. For the most part, he was very shut down, except when other dogs visited the clinic. That’s when he perked up and wanted to play with them all.

Seeing other dogs interact happily with people, he started to be curious for himself. With a canine companion or two, he was much more confident and he even started accepting pats ― as long as he had a friend with him.

When he recovered enough for the jaw wiring to be removed, it was time to move out of the clinic. There was no question about it: Togo would need a roommate. 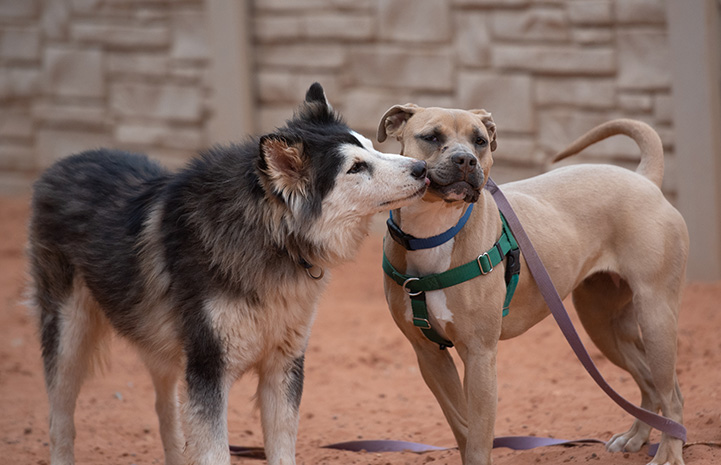 Getting by with a little help from his friends

As it turned out, Togo didn’t get just one live-in friend. He got three. “All of them have different play styles,” says caregiver Jenna Karoly. “Taquito and him box. Him and Haku, the hound, just zoom around the yard together. And then Badger was our newest intro, and Badger and him just lay at the gate together and they just kind of chill.”

[Despite her difficult past, this dog is kind to everyone she meets]

Not only do Togo’s roommates love him, but they’re also plenty confident with people. And since he takes his cues from his dog friends, he’s getting a lot more comfortable with humans. It still takes him time to warm up to new faces, but when his roommates crowd around someone for attention, he’s right there sniffing and investigating. 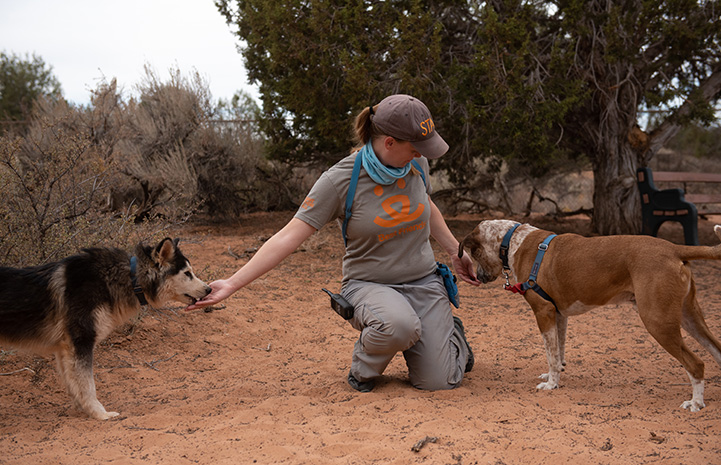 “If you go in there and just do chores and kind of ignore him, he’ll come up to you on his own time,” says Jenna. “When I’m petting his roommates, he’ll come up and lick my hands.” Jenna says he’s very curious about people and clearly wants to interact. When he successfully licks a hand, he hops away looking proud of his accomplishment. He just needs a little more confidence.

Food helps, of course, and now that he’s graduated from wet to soft food and can eat just about anything, he’s quite happy to take treats ― even from people he doesn’t know very well. And he looks cute as can be, crunching away at a snack with his crooked bottom jaw.

As Togo has become more relaxed, his personality has emerged full force. He’s a playful, happy dog who just wants to have fun. He loves toys, blankets and, of course, snow. And while he used to be scared of the leash and ran outside when it was time for a walk, now he can easily be clipped up inside. Walking with his friends is worth it. 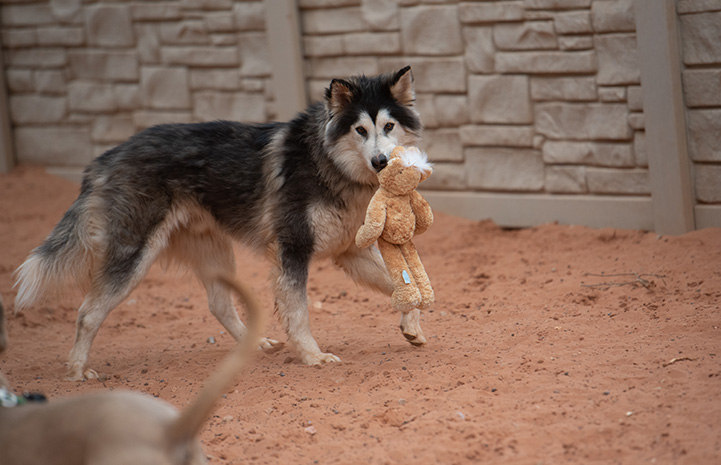 Togo remains shy with new people, which sometimes surprises those who see how curious and comfortable he is with people he knows. A little extra time and maybe a friend to hold his paw along the way are all he needs to warm up. “I think in a house he’d make a lot of progress and would really take cues from other dogs,” says Jenna. “Especially if they were really super friendly and cuddly on the couch: I think he’d want to be there.”

In the meantime while Togo waits to go home, he’ll have plenty of help from his friends ― both dog and human alike.

By joining Best Friends, you can help more homeless pets like Togo as they recover and look for a family.