Image
Two matted dogs, a senior cocker spaniel and senior poodle, receive makeovers that transform them. Both found a forever home together.
By Nicole Hamilton

No one quite knows what kind of life Scruffy had before he arrived at the Best Friends Pet Adoption Center in Atlanta, but if looks could tell a story, there’s a good chance it wouldn’t be a happy one. The senior cocker spaniel was so malnourished when he first came to the adoption center that his ribs were visible through his matted hair, hence his name.

And like Scruffy, all Kiwi really wanted was a good meal, a good grooming, and a chance to live the rest of his life knowing only comfort and love. Both dogs would get that at the adoption center. The big question, though, was how long it would take for adopters to fall in love and take each of the senior dogs home.

Kiwi and Scruffy ended up at Fulton County Animal Control in Georgia, which is run by LifeLine Animal Project, a Best Friends No More Homeless Pets Network partner. The dogs arrived separately, a few weeks apart and from different situations, but both were older and had lacked basic care.

Kiwi was first, and when he arrived, the staff took one look at him and knew he’d likely have a tough time getting adopted at the shelter, where he was surrounded by younger dogs who looked a lot less worse for wear, so they contacted Best Friends in Atlanta. Soon after, he was moved to the Best Friends Pet Adoption Center, where he got a much-needed bath and the extra TLC he deserved.

A couple weeks later, Kiwi was joined by his kindred (and initially, equally disheveled) spirit, Scruffy, who also came from Fulton County Animal Control. “They were both so sweet, but in pretty bad shape,” says Susan Leonard, the Best Friends volunteer coordinator in Atlanta. Both dogs were much too thin and had dirty, matted coats. Kiwi also had a heart murmur and Scruffy had heartworms. Susan adds, “You could tell, though, that with a little love and care, they would be great with just about any family.”

At the pet adoption center, the two dogs were fully groomed and given good vet care and an appropriate feeding plan, and they were soon looking and feeling a lot better. That was the easy part. The harder part would be finding each of them a new family who saw beyond their age and health challenges to who they really are: gentle dogs with a lot of love left to give. 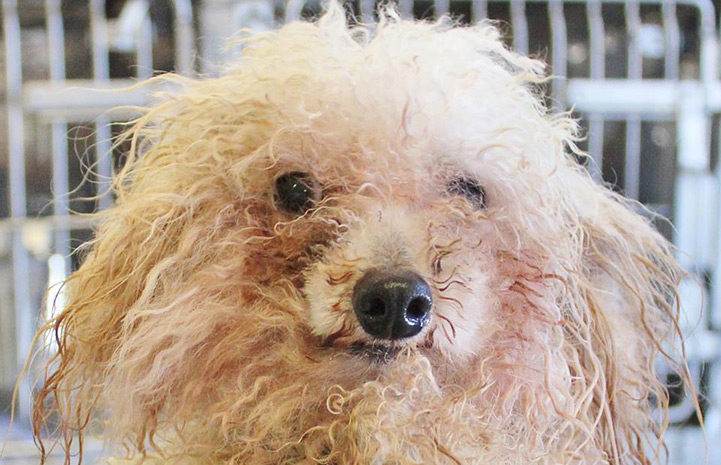 Meeting two diamonds in the rough 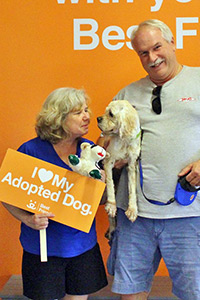 Jane McArdle had been looking for a miniature poodle to adopt when she spotted Kiwi on the Best Friends in Atlanta Petfinder page. His senior status didn’t faze her one bit. In fact, she already had two senior dogs at home. To her, caring for older pets isn’t a challenge; it’s an opportunity to make their last years as golden as possible.

The only thing left to do, Jane decided, was head down to the pet adoption center to meet Kiwi, so she and her husband made their way there to see if she was a good match. They weren’t there very long when they met a cute older dog who had come to the adoption center with matted hair and a hungry belly.

Only it wasn’t Kiwi the poodle — it was Scruffy the cocker spaniel.

“We just fell in love with him when we saw him,” says Jane. They liked how Scruffy sat patiently while the dogs around him barked at Jane’s husband, presumably because he’s very tall. “He just sat there looking at my husband,” Jane remembers, “like a little statue with a wagging tail. We could tell he was a sweet dog. And so beautiful.”

Jane and her husband did end up adopting Kiwi, who they had originally been interested in. And they adopted Scruffy, too. In one fell swoop, both of the once-skinny and matted dogs had a fantastic new home. 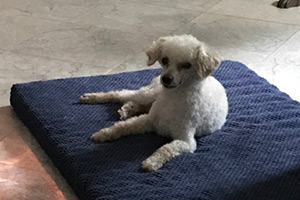 Today, Kiwi and Scruffy are settling into life in a home where they are safe and nurtured. Kiwi is more adventurous than Scruffy and likes to rally the other dogs — and people — to play. Scruffy is still a bit shy, but he follows Jane everywhere she goes, and he’s never far away from the toy lamb that accompanied him home from the adoption center.

Recently, during a nighttime thunderstorm, Jane noticed that Scruffy was shaking and scared. She put him in his crate for comfort and sat with him. Soon after, Kiwi came over to where she was sitting. The little poodle placed his head on Scruffy’s crate until Jane opened the door and let him in.

Later, she found the two dogs asleep together and her heart melted. “I am so happy we adopted them,” says Jane. “This is the chance they deserve — to live a comfortable life.” 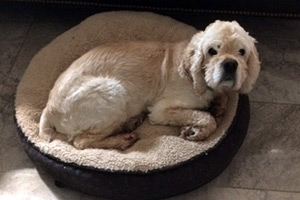