Dog with subaortic stenosis living life to the fullest

When Churchill the dog strolled into the Welcome Center on his recent visit to Best Friends, a dozen people were waiting to greet him, and a signed welcome banner hung over the front desk. It was a special pilgrimage for this special-needs dog, a chance for him to experience a sense of peace and belonging in a place where thousands of animals just like him have taken refuge. And, somehow, the stars aligned for Churchill, as they have for so many others.

Rescuing a dog with a subaortic stenosis

The Little Friends Foundation, a rescue and shelter founded in 2011, had just become a Best Friends No More Homeless Pets Network partner. Director James Williamson and employee Lara Mirkovich went to the Las Vegas county shelter to pull three dogs. Churchill wasn't one of them; they didn't even know he existed until, serendipitously, they walked down a row of dog runs, turned a corner, and saw his face. At that moment, Churchill was saved and his odyssey began.

During a trip to the vet, for a suspected case of ringworm and an acute respiratory infection that turned out to be pneumonia, the veterinarian detected a severe heart murmur in Churchill. When his concerned rescuers took him to a cardiologist, they received a devastating diagnosis: subaortic stenosis, a narrowing of the aorta, which puts tremendous pressure on the heart. Because the condition is inoperable in dogs, Churchill, who is only two years old, is on borrowed time. 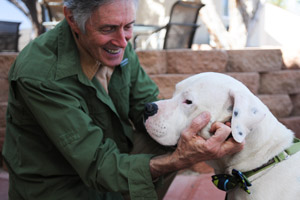 Distraught, James, Lara and a group of dedicated volunteers, including Christy Stevens and Stephanie Shuster Woody, tried to figure out how to give Churchill the best possible life in the short time he has left. They began with a bucket list, in which they included a trip to the beach, a shopping spree at a pet store, a photo shoot - and a trip to Best Friends.

They also shared Churchill's story on the Little Friends Facebook page. The response was immediate and overwhelming; people felt an instant connection to the sweet dog and wanted to follow his journey. Now, "Churchill the Polar Bear" has his own Facebook page with more than 1,200 fans, many of whom have sent him postcards, gifts and heartfelt well-wishes.

In addition to his online supporters, Churchill's travels have brought him into contact with people from all walks of life. And all of them seem to have one thing in common: they fall in love with Churchill instantly. It's not hard to see why. Churchill is nicknamed "Polar Bear" because his bright white fur, oversized feet and unique black markings around his nose make him look very much like the furry Arctic creature. But his true allure lies in his calm, gentle nature and the fact that, everywhere he goes, he makes people smile and inspires them to acts of kindness and generosity. For example, a Best Friends staff member volunteered to give him a massage, and a local business owner reserved a special wind chime for him, so that he will one day be memorialized at Angels Rest.

A legacy of goodwill and hope 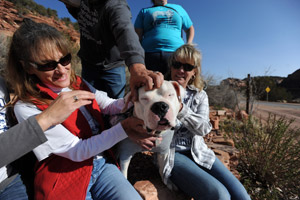 Wherever he went at the Sanctuary, Churchill attracted a crowd and a genuine spirit of goodwill. Though his condition is heartbreaking, it is hard to be sad in his presence. Churchill has become the center of the universe for the people of Little Friends. And he is at his best when he can bask in the love, hope and happiness he brings out in people. This is Churchill's gift; it will surely be his legacy. And, thanks to Little Friends, he has had the chance to share it with everyone at Best Friends.