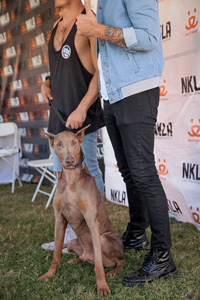 ​Chucky is one regal-looking dog, and this past weekend he landed a castle of his own — finally. The fawn-colored Doberman was a favorite during the months he spent at the Best Friends Pet Adoption and Spay/Neuter Center in Los Angeles, but it took an event with much fanfare to find Chucky just the right family.

In fact, Chucky was one of nearly 500 pets to find homes this past weekend at the Best Friends NKLA Super Adoption, presented by BOBS from Skechers. Chucky and many others like him just needed that extra boost to help them go from homeless to home.

Getting to no-kill in Los Angeles

Best Friends’ two-day adoption event featured pets from municipal shelters and rescue groups from around Los Angeles, and it provided those pets with the perfect venue, an audience and a chance to shine.

Best Friends Animal Society’s goal is to make Los Angeles a no-kill city by the end of 2017. That means not only keeping pets out of shelters in the first place, but helping as many animals as possible leave the shelter alive. For example, when Chucky was brought to a Los Angeles city shelter, Best Friends staff discovered him and took him in. And he’d been patiently waiting for a home ever since — until his big day, this past Saturday.

When the event began, hundreds of pets were ready and waiting in Hancock Park, which surrounds the LaBrea Tar Pits, a popular Los Angeles tourist site. People streamed through the gates, drawn to the tents, booths and adoptable pets in all shapes and sizes. Chucky took it all in stride. Not every dog can handle the flurry of activity, but during his time with Best Friends, he was known for his cool attitude.

When Best Friends public relations specialist Michelle Sathe chose Chucky for local television appearances, she says, “He was so well-behaved. He would just lie at my feet and look regal. In the car, he’d take over the back seat with his lanky limbs and stick that beautiful snout out the window.”

Chucky’s calm vibe served him well, and helped him land a home, too.

Volunteer Ron Peterson was helping out at the event, and when two roommates described what they were looking for in a dog, it was quickly apparent that Chucky fit the bill perfectly. One said he’d love a big dog, while the other hoped for a mellow dog.

If there are two words to describe Chucky, they are big and mellow. Soon the roommates were filling out adoption paperwork, and now Chucky is home with his new family. They plan to bring Chucky along to work, where he’ll surely hold court, just as he always has.

Meanwhile, cats from shelters and rescue groups at the event endeared themselves in their own way to potential adopters. Out of all the adoptable cats and kittens, Huey was one to remember. A big, burly tomcat with “airplane ears” (they naturally stick out sideways instead of straight up), Huey had been at the Best Friends Pet Adoption and Spay/Neuter Center for months, waiting for a home.

He’s nine years old and has the feline immunodeficiency virus (FIV), a condition that can affect cats’ immune systems. That just made it harder for him to be noticed by adopters — especially with dozens of teeny, adorable kittens hogging attention, as only kittens can do.

But Huey had those ears. And he also had Heather Ramsey, a Best Friends volunteer who made it her personal mission to find Huey a home. Heather says, “There is just something about Huey that you can’t help but love. He has those awesome airplane ears which make him look like he’s mad, but I can’t recall a time when I ever saw him upset.” 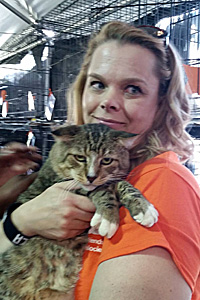 Though Heather was ready to talk to anyone interested in Huey, he’s one of those special cats who practically sells himself. When a woman came in looking for a calm cat who likes to hang out on the couch and Heather walked her over to Huey’s enclosure, he did the rest.

“He was just his charming, laid-back self, which was exactly the personality she was looking for,” Heather says. She adopted him on the spot, undeterred by his age or anything else.

When the event wrapped up Sunday evening, Chucky, Huey and nearly 500 other pets who had started the weekend homeless were snug in their new homes. And while the event is most certainly designed to save pets’ lives, it’s also rewarding for all the volunteers, who get to see animals go from homeless to home.

“People sometimes tell me they’d be too sad to volunteer with an animal rescue,” Heather says. “But I love working Best Friends adoption events because of stories like Huey’s. The highlight of my week was seeing how happy Huey’s new family is to have him.”