When Ann Perkins came to the Best Friends she was so scared she hid from everyone, but through hand-target training she learned the world isn't so scary after all.
By Nicole Hamilton

In the television show Parks and Recreation, Ann Perkins had a few false starts before finding true love. But no matter where she was in life, she was always surrounded by friends who adored her (including the one who would win her heart).

Ann Perkins (the dog) has a similar story. Although her adoption took longer than most other dogs at the Best Friends Lifesaving Center in Atlanta, everyone always knew that for Ann the best was yet to come — just as soon as she found the courage let go of her fears and trust people. 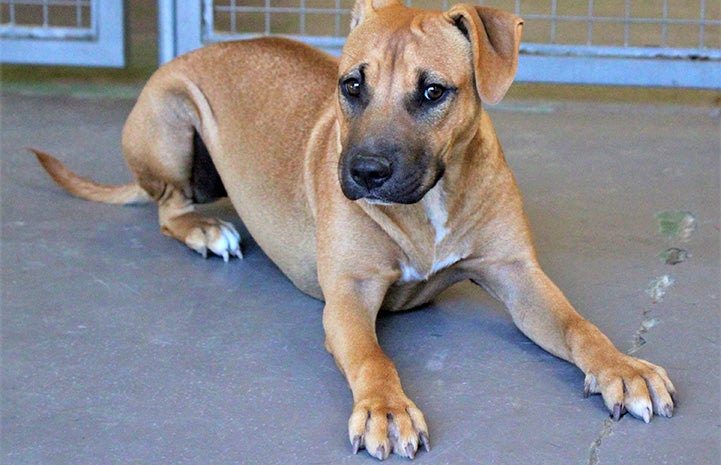 Before coming to Best Friends, Ann lived in an abandoned lot near downtown Atlanta with three other dogs. Eventually, they landed at DeKalb County Animal Control, where they were so scared that they hid in the back of their kennels, afraid to let anyone touch them.

From the shelter, the four dogs were brought to the lifesaving center, where the team named them after characters from Parks and Recreation. Ann Perkins and Ron Swanson were the most reserved of the bunch, while Leslie Knope and Tom Haverford found it easier to let their guard down and make friends with people.

At first, just as they did at the shelter, the “parks and rec dogs” preferred to hide in the very back corners of their kennels. Although they were comfortable around other dogs, they were extremely frightened of humans. To gain their trust, the team used hand-target training to teach them that outstretched hands are not a threat.

[How hand-targeting helped the “parks and rec dogs” gain confidence]

Over time, Leslie Knope and Tom Haverford were adopted, Ron Swanson went to Best Friends Animal Sanctuary and Ann Perkins remained at the center. With the help of staff and volunteers, Ann slowly and surely started coming out of her shell and each day grew more confident. 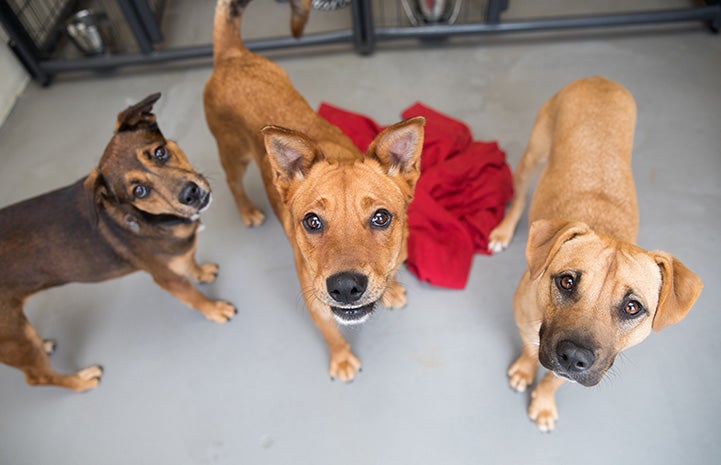 A shy dog finds confidence in a foster home

The longer Ann stayed at the center, the more time the team had to help her overcome her extreme shyness. It also gave her a chance to turn most of the staff and volunteers into adoring fans. One of those was Tessa Carletta, who over the years has fostered many dogs from Best Friends.

Tessa, who was working with Ann, offered to foster her in her home. Still afraid of her leash, Ann needed a place like Tessa’s, which had an enclosed area where she could get fresh air and retreat when she wanted alone time (which is often). And since Ann warms up to dogs before she warms up to people, she needed a home with a fellow canine. Tessa has two senior dogs named Lexi and Seymour.

Soon after arriving at Tessa’s house (and after sniffing around for a spell), she made herself at home. A doggie door was installed so Ann could go outside to do her business, and Tessa says the quarantine proved to be a silver lining. “I was really lucky to be home all day,” she says. “Ann would lie next to me while I was working and could always see where I was.” 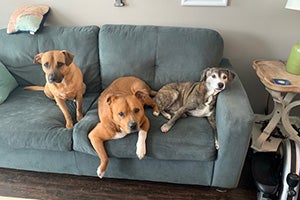 Things really turned a corner one day when Ann joined Lexi and Seymour by hopping up on the couch like she didn’t have a care in the world.

Then one afternoon as Tessa went upstairs to take a nap, Ann followed her. This was a big change. “Up until then she’d never been up and down the stairs,” says Tessa. “I went to lie down and she laid down next to me. It was her first human snuggle.”

All of this information was extremely helpful for the adoption team, says Jessica Krueger, the center’s lifesaving program manager. “We were able to see a whole new side of Ann that, in turn, would help us set her and her new family up for success.”

The call that changed everything 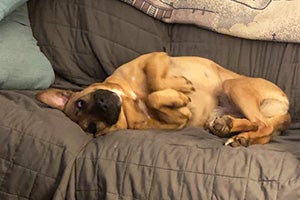 When she brought Ann home, Tessa was certain about one thing: She wouldn’t send Ann back to the center unless it was to make her adoption official. In fact, Tessa and her fiancé were fully prepared to adopt Ann if at some point they felt she had waited long enough to find a home. But just a couple of months later, they learned that someone was interested in adopting Ann and wanted to learn more about her.

Tessa hopped on a call with Katie Queener, her boyfriend, Brendan, and his mom, Dawna. Since they all live together, they would each have a hand in caring for Ann. Forty minutes later when Tessa hung up the phone, something told her she’d just met Ann’s new family. “They asked all the right questions,” she says. “I could tell they’d done their homework.”

The next step was for Katie, Brendan and Dawna was to visit Tessa’s place with their 11-year-old boxer mix, Misty, for a socially distanced meet-and-greet.

[Cat charms adopters from way more than six feet away.]

It ended up going better than Tessa ever could have imagined. She was frank about Ann’s challenges and how tough it was for her to open up ― something Katie noticed right off the bat when Ann remained in her crate for most of the meeting.

“They were all on board with what it would take for Ann (to be comfortable in her new home),” says Tessa. They also got to see how comfortable Ann is with other dogs. She and Misty got along great, and when Seymour and Lexi joined in, the meeting turned into a full-on dog party. Then, before Katie left, Ann walked up to give her a little kiss. 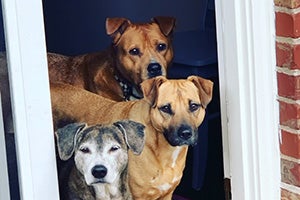 Today, Ann has brought joy to her new home and has become particularly fond of Dawna — that is, after she warmed up to Misty, who became her instant BFF.

On most days, Ann is either with Dawna or out in the backyard. “That’s her domain,” says Katie, who doesn’t mind that Ann has connected first with Dawna. She knows it’s going to take some time before Ann feels completely comfortable with everyone. “It’s kind of like college,” says Katie. “It’s four years of hard work, but it’s worth it.”

For now, Katie is enjoying watching how Ann’s loving, gentle personality slowly unfolds. During a recent thunderstorm, Ann sought out Katie for comfort and rested her head in her lap. The next day she was back to being skittish again, but Katie didn’t mind. “It’s rewarding,” she says. “Every time she takes a new step it melts your heart. She has a lot of love just waiting to come out.”

The day Ann’s adoption became official, tears (of joy, of course) were shed. And, truth be told, a few tears still flow whenever the team gets updates on how Ann is doing. “It is so wonderful to see Ann thriving in her new home,” says Jessica. “I know she will continue to make progress with Katie and her new family. We are so happy knowing she is where she deserves to be.”

There are wonderful dogs just like Ann at your local shelter or rescue group. Give them the life they’ve been waiting patiently for.

Weekend away makes a world of difference for energetic dog

Dog training to the rescue with advanced behavior team