Image
Read adorable and hilarious true animal stories of an African gray parrot who talks, cats who say hello, and a dog who understands Spanish.
By David Dickson

Caring for animals often demands our very best efforts. Sometimes, however, those best efforts don’t exactly earn us heaps of gratitude from the animals we love. Ever given an unwilling dog a bath and ended up more soaked than he did, and after all your troubles still found yourself on the receiving end of a pouting look that made you feel like you had just stolen his favorite toy? 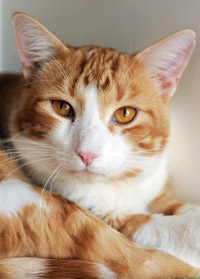 Other times, thank goodness, we do experience how much we’re loved right back by our pets. It’s evident by the dreamy look in their eyes after a good belly rub, their loud purr after receiving a tasty treat, their wagging tail when a leash is presented. Parrot manager Jacque Johnson, as it turns out, might have just experienced something to top them all. There’s no question in her mind that her hard work was noticed.

The other day, she was cleaning the cage of Allie, an African gray parrot at Best Friends. Once the cage was all cleaned up, spick and span, Allie surveyed the situation and said in crystal-clear Allie-speak, "That was a goooood job!" Sure is nice to be appreciated! 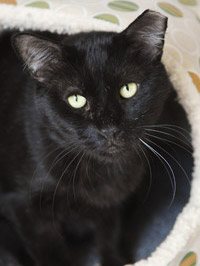 Over at Quincy House, one of the buildings in Cat World, another pair of animals did their level best to chatter away at their caregiver. The chatter started when Barbara Sanderson entered the room and said hello to the cats. At once, Piewacket (gotta love that name!) meowed back in a distinctive, loud hello-type voice. Not to be outdone, Pumpkin, another cat in the room, jumped on the bandwagon and called out in an almost identical loud meow.

"They were using the exact same tone," says Barbara. This was definitely a new thing, and before long the two cats had Barbara laughing as they kept up their copycat game of identical meowing, trying to outdo each other by saying hello the loudest. Cat chat, in stereo!

A dog who knows Spanish 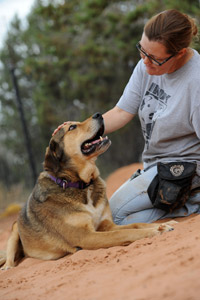 Continuing on with the communication anecdotes, Pulgas, a dog in the Guardian Angel program, had his own little run-in with language recently. Originally from Mexico, Pulgas was out for a walk with his caregiver Kathy Moore. Caregivers have been making a special effort to introduce Pulgas to other dogs and people lately. Out on the walk, Kathy and Pulgas came across Dogtown staffer Bill Rethoret, who as it turns out didn’t know Pulgas. Once Bill heard Pulgas was a stray from Mexico, he said, "Hola!" Pulgas immediately whipped around and stared at Bill excitedly. He’d finally found somebody who spoke his language!

Pulgas gave such a strong reaction that Kathy tried using other phrases in Spanish as training cues, and Pulgas continued on with his little happy dance of excitement. Ever since, caregivers and trainers have been using Spanish to capture his attention, and he still lights up when they do. Sometimes, it’s just nice to feel like you’re back home!

Adopt your next four-legged family member

Sponsor an animal at Best Friends

We understand that not everyone can adopt an animal currently being cared for at Best Friends. That's why sponsoring a special animal whose story touched your heart is a popular alternative to adoption. Learn more.