Image
Senior pig with arthritis gets special accommodations to keep him comfortable during the winter.
By Christelle L. Del Prete

Winter can be tough for those of us who don’t love cold weather. It’s so much harder to get motivated and stay active when it’s so chilly outside that you just want to hide in your house under blankets, sipping hot cocoa.

The Sanctuary, located in the high desert of southern Utah, can get pretty cold, and pet potbellied pigs aren’t exactly fans of frigid temperatures. “They’re more tropical creatures,” says Jen Reid, manager of Marshall’s Piggy Paradise. Some pigs, like Teddy, simply refuse to “do winter.” And it takes more than a few extra blankets to help them to comfortably weather the colder months.

At 17 years of age, Teddy probably figures he’s already seen enough of Old Man Winter for one lifetime. “When they are younger, they are more adaptable to the cold, but the older they get the less tolerant they get,” Jen explains. Since Teddy’s a senior, he’s especially sensitive to the cold. When the temperature dips below his comfort level, all he wants to do is hide in his piggy house. And with his age-related mobility issues, ice and snow are simply a no-go.

Marshall’s Piggy Paradise has plenty of warm sturdy piggy houses filled with bedding that the pigs can to burrow into when it gets cold. Some pigs sleep in their houses alone, while others pair up for some snuggles.

Teddy wasn’t into snuggling with anyone. He didn’t want anyone to come inside of his house, and he didn’t want to step outside of it — even to eat and drink. It was as if he decided to hibernate until spring, but pigs really aren’t meant to do that. Teddy could get his breakfast in bed if that’s what he wanted, but, since exercise is important for good pig health, Teddy needed to get out and get moving.

Sunshine and exercise for pig

Teddy’s caregivers had a plan to help keep Teddy much more comfortable through the cold months. He would move just next door to the sunny side of the canyon. Though the goat barn isn’t far from Piggy Paradise, it receives a lot more sunlight. That’s because the back border of Marshall’s Piggy Paradise is a big red cliff. While it’s beautiful, it does block most of the afternoon sun. On the other hand, the area surrounding the goat barn is wide open, with the sun shining longer on the barn than on the pig houses during the day.

Since there are plenty of stalls in the barn, there was also an opportunity to build a shelter within a shelter for Teddy. That way, he would have more options and could move from one hidey hole to the other without worrying about getting kicked out for invading another pig’s space. 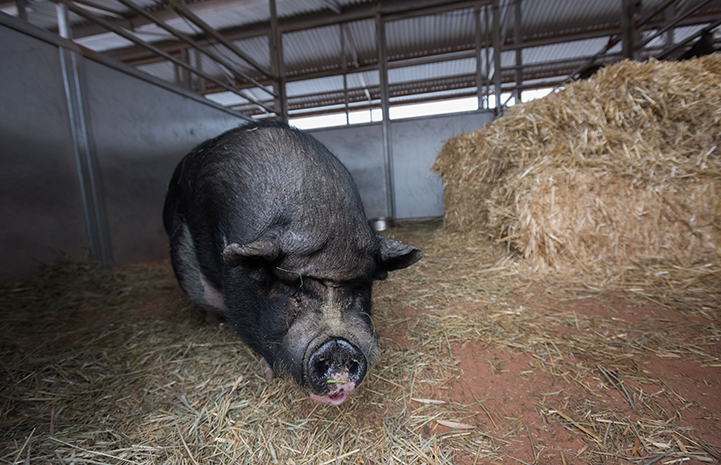 First, caregivers set up what they called a “Ted bungalow,” a sturdy shed-like building with a thermostatically controlled heater inside. Teddy also has plenty of hay in there, along with a heated pad that covers the floor. Then, in one of the stalls about 20 feet away, they made him a “pigloo,” — a big plastic dog igloo that is lined with blankets and has a heat lamp hanging above. Once caregivers string blankets around the pigloo, it looks like a tent.

None of this has changed Teddy’s attitude toward winter. He would still prefer to enjoy summer year-round. But his move has made it easier for him to get around, and since the barn is covered, it’s free of ice and snow. That keeps Teddy more mobile and helps him get a little healthy exercise each day.

If Teddy ever feels lonely, he can visit with two other pigs — sisters Miley and Riley — who because of arthritic joints also winter in the goat barn. He can mingle with the friendly goats, or call over to Salt and Pepper (a miniature horse and a Shetland pony), who just moved into one of the stalls on the other side of the barn. 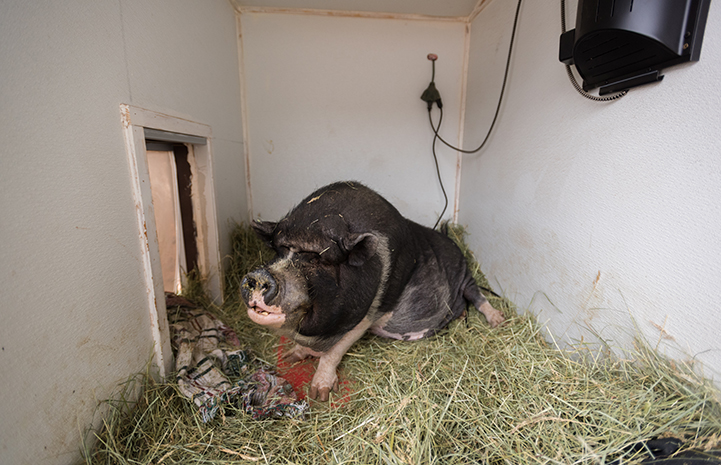 Best of all, the fact that Teddy will now venture outside of his bungalow means he enjoys seeing friendly faces a lot more often than before — on his terms, of course. If Teddy’s caregivers see that he’s not out and about, they’ll open his door to check on him. If he’s not ready to come out yet, he’ll start sounding off with lots of grumbles, grunts and groans to let them know he’s not thrilled about being disturbed. But, sometimes, Teddy will gamely hoist himself off his heated floor and come out for a visit or a snack.

There’s no doubt that when Old Man Winter finally retreats, Teddy won’t miss him at all. But until then, he no longer has to hide. He can step outside and feel the warm winter sun on his face. 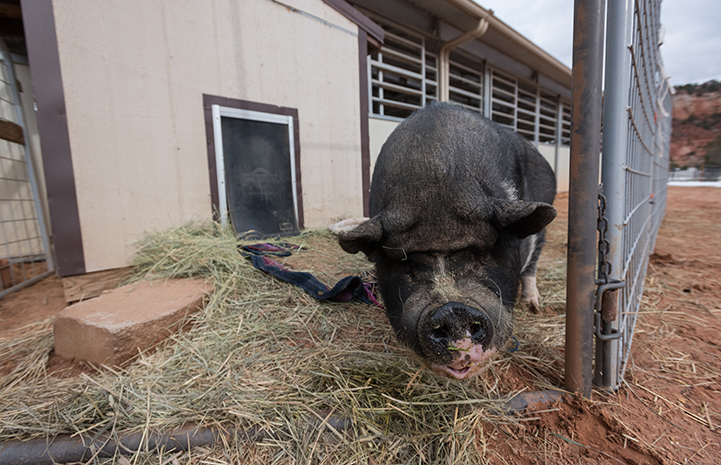