Homes for hundreds of pets in Los Angeles

We all know that the day after Thanksgiving (Black Friday) has become a shopping extravaganza for much of America. But this year in Los Angeles, many people skipped the lines at stores and headed to a place where they could get something way better than a good deal.

Beginning at 5 a.m. on November 28, people began lining up at the Best Friends Pet Adoption and Spay/Neuter Center to adopt their new best friend during the #Holiday100 adoption promotion. The center stayed open day and night, straight through the weekend, giving people as much time as possible to come in and find the perfect dog or cat for them. And they did get a good deal, too: The first 100 adopters enjoyed a $10 adoption fee. 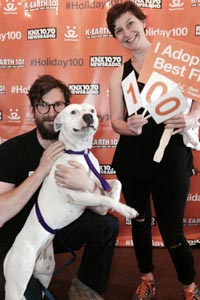 Janelle, a sweet tan Chihuahua mix, was the first pet to go home early Friday morning. Her new mom, Margaret, had driven about 40 minutes in the wee hours to be one of the first to choose a new pup at the center.

By midnight Friday, more than 80 dogs and cats had left the center to spend their first night in new homes. On Saturday morning, everyone watched and waited to see who lucky #100 would be. It happened to be Cher — an ultra-sweet pit bull terrier mix, affectionately known to some as “Cher-Bear.”

Cher, one of the center’s long-term residents, just hadn’t found her forever home yet, even though she loves everyone she meets, is great with other animals, and is the quintessential good family dog. “It couldn’t have been better that she was the 100th pet to go home,” says adoption specialist Denise Landaverde. “We’re all so happy for Cher; it’s the perfect family for her. She’s going to go to work with them every day and they plan to train her as a therapy dog.”

Doubling the impact of the adoption promotion

While the original goal of the promotion was to help 100 pets find new homes over the weekend, the adoptions didn’t stop with Cher. People kept arriving throughout Saturday and even on rainy Sunday, eager to meet and bring home a furry new family member. (Watch a video clip on NBC4 news here.)

So it was decided to extend the $10 fee for all adoptions through Sunday evening to get the most pets as possible into great homes. And with good reason, because every pet adopted from the center means one more pet can be pulled from Los Angeles Animal Services (LAAS) shelters. 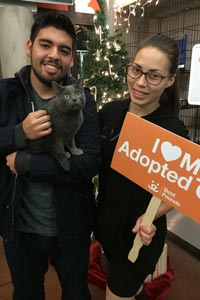 All animals at the adoption center come from LAAS; it’s part of Best Friends’ plan to bring Los Angeles to no-kill by 2017. As pets went home and kennels at the center emptied, staff and volunteers headed to LAAS shelters each day to bring in more pets. With 9,000 pets dying in Los Angeles shelters each year, there’s no time to waste when space opens up at the Best Friends center.

Adopters could feel extra good about bringing home a new pet during the #Holiday100, because not only did they get a great new family member, they made it possible for Best Friends to get another pet out of the shelter — doubling their impact.

When the center closed Sunday evening, more than 200 pets had found homes in three days. Marc Peralta, executive director of Best Friends–Los Angeles, says, “This adoption event shows that through a lot of hard work, some different ideas and a lot of help from the community, together we can Save Them All.”