How a blind, deaf cat found happiness after Hurricane Harvey

Parts of this story appear in the November/December issue of Best Friends magazine in an article by Laura Moss. You can subscribe to the magazine by becoming a Best Friends member.

If you walk by Terry without pausing to lean down and give her a few good head rubs, she’ll make sure you never hear the end of it. “I have never heard a louder cat,” says Leslie Stutheit, Terry’s adopter. “If I brush by her without petting her, she'll start yowling until I either pay her some attention or until the neighbors call because it sounds like a lion has invaded my living room.”

But Leslie certainly doesn’t mind giving Terry all the attention in the world, because not only does this sweet senior girl have the roar of the lion — she has the heart of one, too.

Terry was one of the hundreds of pets displaced after Hurricane Harvey struck the coast of Texas a year ago. And to top it off, Terry is also blind, deaf and has cerebellar hypoplasia, a neurological condition that makes her wobble when she walks. 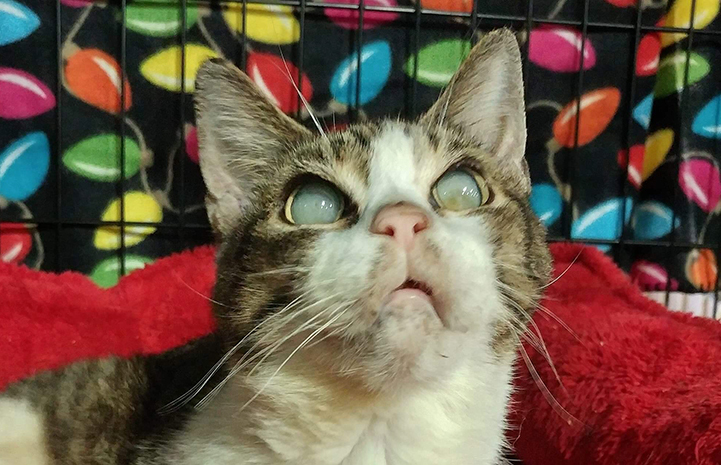 Despite the bad luck fate threw Terry’s way, she never stopped purring. And perhaps it’s because she knew something wonderful was waiting for her just a thousand miles away.

The goal at the Pet Reunion Pavilion was to reunite as many dogs and cats with their people as possible. And while many of them were, indeed, happily reunited with their families, there were others like Terry whose families couldn’t be found, or they never had homes to begin with. For those pets, they needed safe places to go. 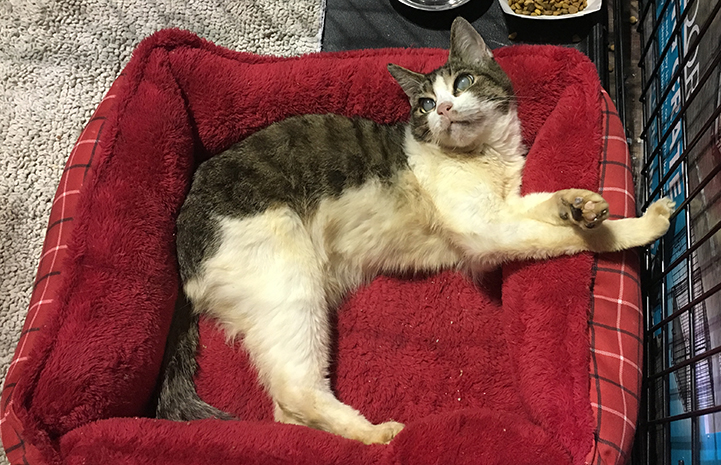 Right now, Best Friends has more than 2,300 (and counting) network partners in all 50 states. During the hurricane relief efforts, many of them volunteered to open their doors to displaced pets, ensuring them the care and time they needed to find homes. And that included MaxFund Animal Adoption Center, a shelter in Denver, Colorado.

It wasn’t long before Terry made the long journey to Denver and, soon, into a loving new home.

A new life for a cat in Colorado 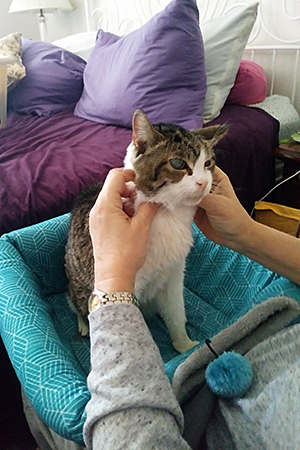 Once Terry got to Denver, it didn’t take long for her to catch Leslie’s eye. “She is pushing nine years old, has an abundance of snot, only a couple of teeth and some beautiful but totally useless ears and eyes,” Leslie says. But it wasn’t only Terry’s appearance that made Leslie fall in love.

“I adopted Terry because I always had cats as a child and had really come to miss the unique company they provide,” Leslie says. Leslie originally wanted to take home a cat with feline immunodeficiency virus because she knows it’s a disease that’s often misunderstood. But Terry stood out right from the start with her toothless grin, cloudy eyes and heart-of-a-lion roar.

“Terry is definitely the most unique cat to ever grace my litter box,” Leslie says.

It didn’t take Terry long to fall in love with Leslie and make herself right at home, either. In fact, Leslie was astonished at how quickly she navigated around her apartment. “She started out by just walking in circles that slowly got wider and wider until she bumped into something. Then she would move a foot away and start walking in circles again,” Leslie says. “I haven’t had to make as many adjustments as one would think.”

To Leslie it’s that, every night — despite having soft, warm blankets in every corner of the house where Terry can rest her head — she always winds up in bed, right next to Leslie’s leg. “A phenomenon I can only attribute to magic,” Leslie says.