Image
Stray, malnourished dog was very weak and thin, but after time with a loving foster family, he is stronger and healthier, and ready to be adopted.
By Nicole Hamilton

Seymour, a dog at the Best Friends Pet Adoption Center in Atlanta, has a beautiful shiny coat and a very friendly attitude that you can’t help noticing. He shares a large kennel with a few of his closest canine friends, but he also loves slipping out the doggy door to lounge outside in the bright Georgia sunlight. He’s come a long way after being found emaciated with a collar embedded into his neck. Since being rescued, he’s received love at every turn, and that includes a foster mom who helped him heal.

Critical care for a starving dog 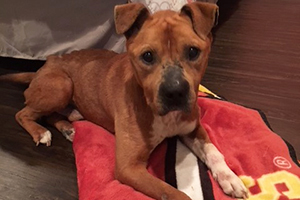 When DeKalb County Animal Services received Seymour as a stray, he was so thin that every rib showed through his fur. The young dog needed immediate medical attention  and weeks of care before he’d be well again. So weak that he couldn’t stand up, Seymour was brought to the Best Friends Pet Adoption Center, where caregivers removed the embedded collar and put him on a special diet to help him gain weight.

Foster mom to the rescue 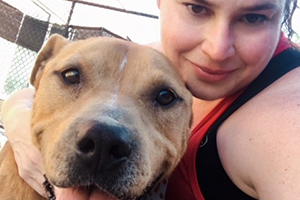 Seymour not only started getting stronger every day, but he began to trust the people around him. He became a favorite with many staffers and volunteers, who found it hard to have the blues when they were around a dog with such an indomitable spirit.

It would be a while before he would be well enough for adoption, so the volunteer team contacted Tessa Carletta, who regularly opens her home to pets needing special foster care. Tessa made room for Seymour and was determined to help him grow stronger and healthier, so he could find his very own loving family. 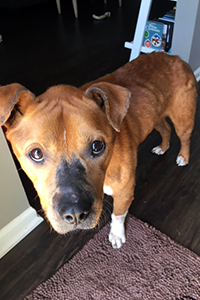 During Seymour’s first days at Tessa’s home, he was still too weak to walk up the stairs. “I had to carry him,” says Tessa. “And he was so thin that I could hear his bones creaking.”

For the next two weeks, Tessa followed his special diet instructions to the letter and gave him baths with oatmeal and tea tree oil to soothe his skin and made his coat shiny. Each day Seymour grew stronger, thanks to Tessa’s careful feeding and a lot of love. And Tessa’s dog, Lexi, helped Seymour grow more confident around other dogs. It’s always good to have a friend show you the ropes.

To Tessa, her time with Seymour passed too quickly. After about two weeks, it was time to bring him back to the center. When he walked in the doors, the staff couldn’t believe the transformation. “Tessa did a remarkable job caring for him,” says Carol Atwood, volunteer and foster coordinator at the center. “Several of us were in tears at how healthy he looked after gaining some much-needed weight.”

Carol says the confidence that Lexi instilled in Seymour is obvious. “He’s constantly wagging his tail. He loves every human and animal he encounters,” she says. 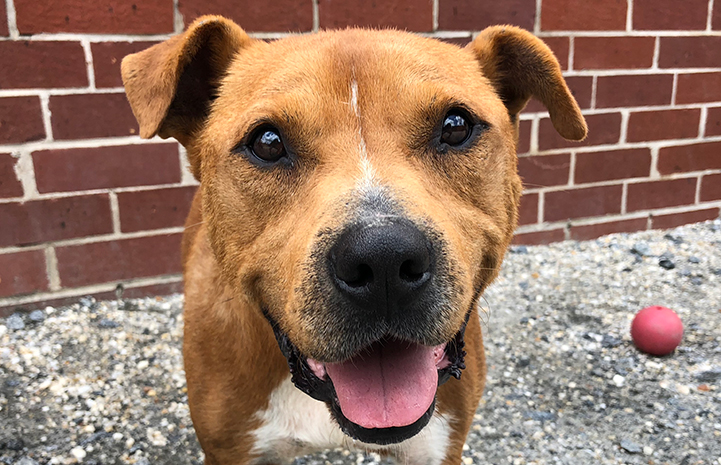 Tessa went out of town for work after dropping off Seymour at the center. When she returned to Atlanta, she returned to the center to check on him and thought about fostering him again. But her job was done. The next step for Seymour would be to make sure that potential adopters could meet him at the best possible place — the adoption center.

On one hand, Tessa missed having Seymour at home, but on the other hand she knows that the love and care she gave Seymour has enabled him to finally step outside and bask in the sunshine, ready to trust the world again.