Image
Humane Society of Tampa Bay is awarded grant from Best Friends to support their effort to find homes for 230 Florida felines with $4 adoption fees.
By Denise LeBeau 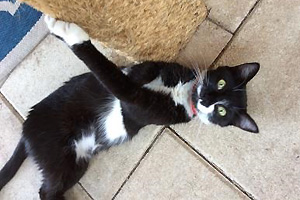 Lemonade is a hero. The sweet young cat was not only an excellent mother to her three kittens, she saved the day for four more tiny orphaned kittens — even after losing her home and ending up in a shelter. The Humane Society of Tampa Bay in Tampa, Florida, which took in Lemonade and her kittens, has been inundated with cats and kittens all summer — just like most shelters around the country.

While spay/neuter is essential to preventing the yearly flood of kittens, shelters around the country also are creative in the ways they find homes for felines entering their doors. That’s where Best Friends was able to help out this summer, not only finding homes for Lemonade and her kittens, but for more than 200 other cats and kittens, too.

The Humane Society of Tampa Bay, which is part of the Best Friends No More Homeless Pets Network, is eligible for funding from Best Friends Animal Society. This summer, network specialist Robin Politowicz had $444 left in her financial aid budget, so she challenged groups in her region to put together plans on how they might use the funds. When staff at the Humane Society of Tampa Bay learned of the opportunity, they came up with a plan, submitted it, and crossed their fingers.

“I knew we could somehow play off the number four and was excited to come up with something different,” says Lisa Knight, executive assistant at the Humane Society of Tampa Bay. The plan was simple. For one month, all cats more than four years old would be available for a $4 adoption fee. The $444 would help pay for the cost of getting all those cats ready for adoption.

Robin says when she saw what the Humane Society of Tampa Bay wanted to do with the funds, she knew it was a good investment that would save a lot of lives. When shelter staff indicated they could find homes for about 100 cats if they received the funds, Robin let them know that they’d come up with the best plan to save the most pets. All that remained was to carry out the plan.

The funding enabled the shelter to begin spreading the word about the promotion. They landed some valuable free advertising from a local billboard company, along with print ads that helped them maximize every dollar. “We are fortunate to have some wonderful friends in the media who support our cause,” says Lisa.

A home for one tuxedo cat and many other felines 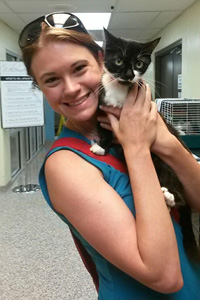 During the same month last year the shelter found homes for 49 adult cats, Lisa says, but this year they hoped the extra effort would produce more homes. They were not disappointed. “This year we placed 99 adult cats, plus 131 kittens,” Lisa says. “There was no doubt in our minds, the promotion worked.”

Robin couldn’t be happier about how the shelter used the funds. “What the Humane Society of Tampa Bay did with the funds is remarkable,” she says. “They not only reached their original goal of 100 cat adoptions, but they far exceeded it.”

Best of all, Lemonade found a great home with a woman who fell in love with her the instant she met her. And all Lemonade’s kittens (plus those to whom she was a surrogate mama) found homes, too. Lemonade’s days of being a mama are over, and now she — and many more cats — are happily in homes once again.

Photos courtesy of the Humane Society of Tampa Bay