Image
In the wake of Hurricane Harvey, pregnant dog is rescued from a flooded area. She and her 11 puppies are doing well now. Read their story.
By Christelle L. Del Prete

What does a litter of 11 puppies have in common with the Houston Astros baseball team? Their names, for one.

Hurricane Harvey rescued puppies Morton, Bregman, McCullers, Springer, Altuve, Correa, Gattis, McCann, Gonzalez, Gurriel and Reddick were named after the Houston Astros players in the spirit of triumph over tragedy. It’s something everyone in Houston knows all too much about.

Puppies born in the wake of Hurricane Harvey

In the wake of the storm, the puppies’ mother, Shelby, came to Best Friends’ base of operations at NRG Arena after she was picked up from a flooded area. The pups were born not only during the height of Best Friends’ disaster response efforts in Houston, but right around the time that the Astros baseball team was fighting to win their first ever World Series. 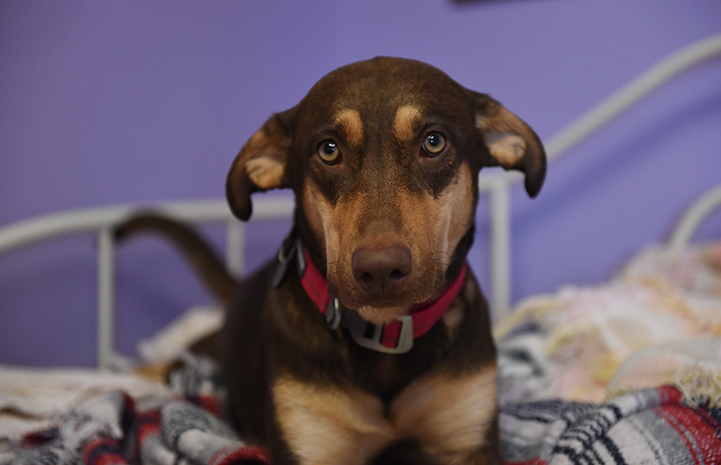 To the staff and volunteers helping on the ground with Best Friends’ hurricane pet rescue efforts in Texas, the two events seemed linked. Just as the win gave the devastated city something to celebrate, the large litter of healthy new puppies brought a sense of hope and renewal after the storm. It was only fitting, then, that the nine boys and two girls were named after members of Houston’s victorious team.

But a temporary shelter was no place for a mama dog to raise 11 newborn puppies. Shelby needed a quieter, more private space, so she and her newborn all-stars hitched a ride to the Sanctuary to start their new lives. 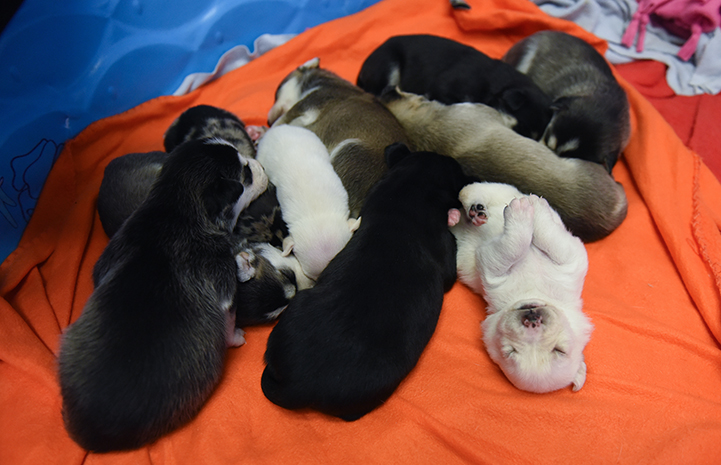 A foster home for 11 puppies

First, the family went to a foster home with an experienced foster mom, Carla Phillips. Although Shelby is an excellent mother, 11 puppies is quite a handful. Carla made sure that each one of the puppies got his or her share at feeding times, and that Shelby got enough rest so she didn’t feel overwhelmed. Shelby seemed to appreciate the help. “She has been a great mom, and she’s super sweet and OK with people handling her babies,” Carla says.

After a few weeks, when the puppies were up and about and starting to climb out of their nest (piles of fleecy blankets in a large blue plastic pool), the family moved on to puppy admissions at Dogtown. 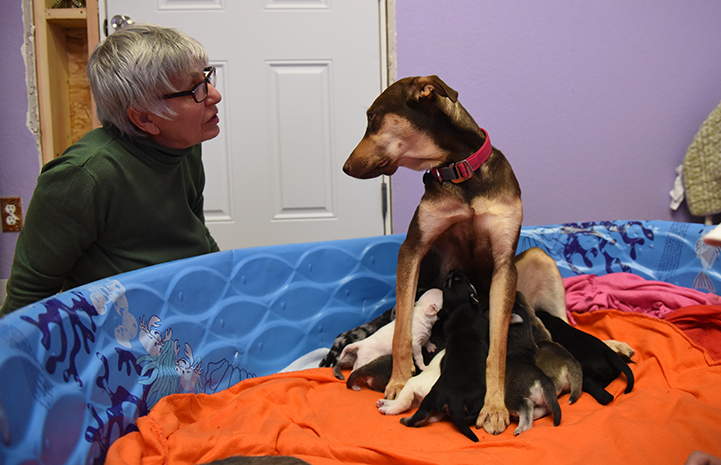 A motley crew of puppies

The Astro pups, now about seven weeks old, have really started coming into their own, with personalities as different as their looks. Morton, a white pup, is the smallest of the litter, but thanks to the excellent care he’s received from mama Shelby and his caregivers, he’s thriving. Morton can often be found snuggling up with his brother Correa, who looks like a larger version of him. 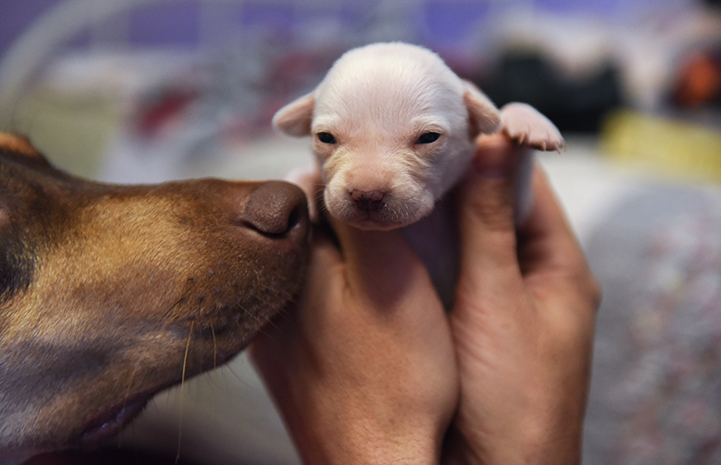 McCullers and Springer are a matching pair of brothers. Curious, playful and adorably spotted, they are the perfect bookends for such a varied litter. Altuve is the biggest kid in the litter and unique in that he’s the only black puppy among the siblings. Then there’s Gattis, also distinct with his black fur and tan-and-white markings.

The other five puppies (McCann, Gonzalez, Reddick and the only two girls in the litter, Bregman and Gurriel) are a delightful, motley crew who have markings similar to huskies. Dogtown caregivers describe them as “little wildfires” — busy and always ready to go. 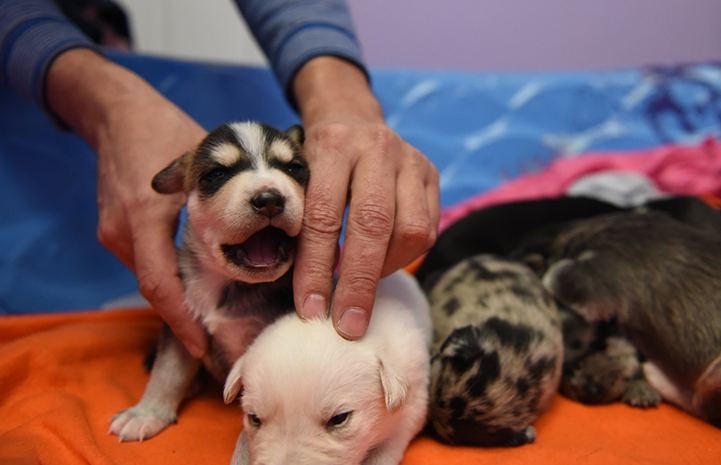 Next steps for the Astro pups

What’s next for the family? Now that the pups are weaning and starting to eat solid food, they’ve been split into two groups. Mama Shelby visits each group several times a day to check and love on them, but she’s also enjoying her own separate space where she can take some well-deserved breaks from the rigors of motherhood.

Her puppies may be a rough-and-tumble bunch, but Shelby herself is a young and energetic dog. Once she’s done raising them, she’ll move on to a different part of Dogtown, where she’ll get to enjoy training, fun and games, and one-on-one time with caregivers and volunteers until she gets a home of her own.

As for the puppies, they’re scheduled to move to Dogtown’s puppy preschool just in time for Christmas. There, as Dogtown’s youngest students, they’ll start learning the skills they will need to be successful in life and in their new homes, once adopted. 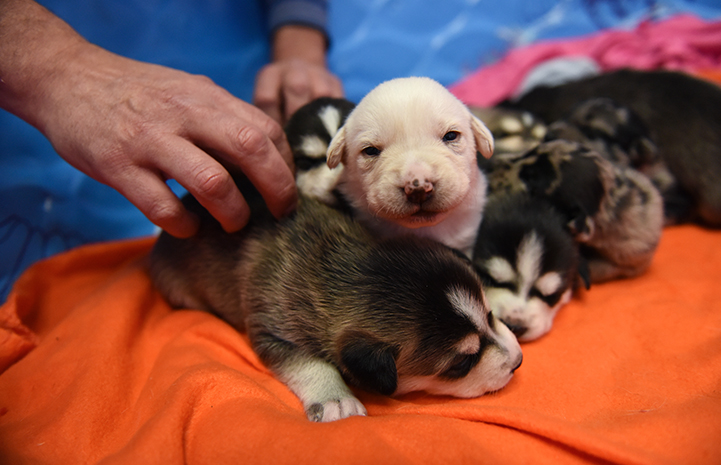 There’s no telling what kind of lives the Astro pups would have had if Shelby hadn’t been rescued after Hurricane Harvey. But they, like the Houston Astros, are proof positive that, even after the darkest days, there’s reason to celebrate. 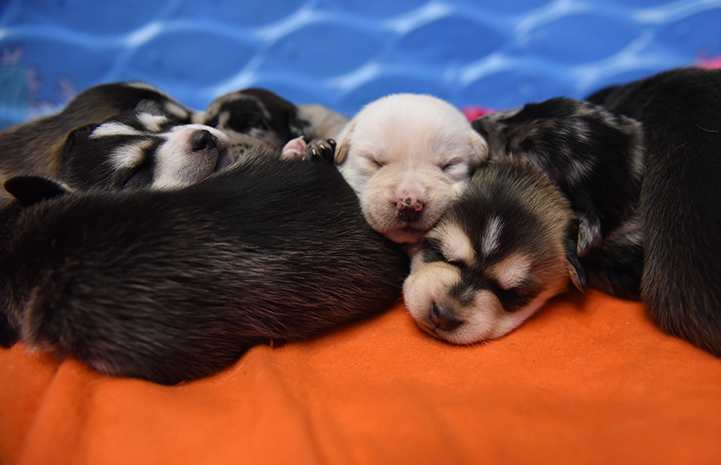